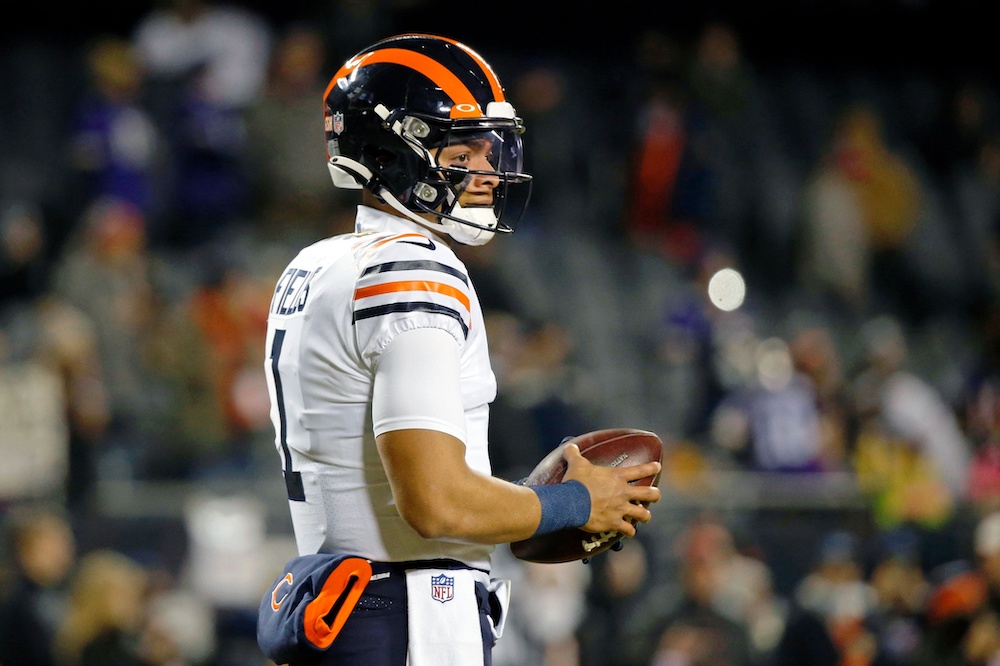 Top 3 Priorities Bears’ Next GM Must Focus On

As the hours turn to days and the days soon turn to weeks in the Chicago Bears’ search for their next general manager, the list of potential candidates recommended by consultant Bill Polian only seems to be growing. Instead of narrowing down the pool of qualified personnel minds, the search is widening. And with this apparent lack of a targeted focus on a handful of top-notch names comes a growing sense of angst and impatience in the fan base. So, rather than regurgitate the list of names who the Bears will (or should) interview for the job, it’s time to pivot our attention to what Chicago’s next general manager needs to focus on as soon as he sits in the big chair at Halas Hall. Here are the top three priorities that deserve the next general manager’s immediate attention. Note: Hiring the right head coach is the obvious one, so it’s not included below.

Invest in Justin Fields beyond just adding talent to the roster

The Bears finally have a franchise quarterback. Forget about Fields’ rookie-season stats or on-field struggles at times in 2021. All first-year passers experience some turbulence in Year 1; just go back and look at Buffalo Bills star Josh Allen’s rookie year and compare it to Fields’. You’ll smile. Trust me. It’s been a while since the Bears have entered an offseason with the quarterback position as settled as it is right now. And it’s time Chicago makes that known… publicly. The next general manager of the Bears should make it his priority to endorse Fields in a way that rivals political conventions. Bring on the pomp and circumstance. Praise Fields as the beginning, middle, and end of what will be Chicago’s trek back to the playoffs and Super Bowl contention. Votes of confidence are oftentimes interpreted as a kiss of death, but that’s usually when it’s a team owner rallying behind his soon-to-be fired head coach. This would be different; it would be a clear indicator that the organization will rise or fall because of Fields. Call it a hunch, but I think Fields has the kind of mental makeup that will thrive off of that kind of pressure.

Once GM-next publicly acknowledges Fields is his quarterback despite not being the general manager who drafted him, the next priority will be to ensure that the second-year passer has the necessary weapons at his disposal to take full advantage of his rare skill set. That means investing heavily in skill players in free agency, namely at wide receiver, as well as established and respected interior offensive linemen. Fields already has chemistry in place with wide receiver Darnell Mooney, and the running game is in good hands with David Montgomery and Khalil Herbert. But it remains to be seen if Mooney can elevate his game to a true WR1 in the NFL; the Bears have to sign at least two quality starters at wide receiver—including one big-ticket item like, say, Mike Williams—to make sure the passing game is protected from a lower-than-expected ceiling on Mooney’s game. As for the offensive line, it shouldn’t be a difficult task for the Bears’ next general manager to upgrade the interior positions. All it will take is one addition at either guard or center and it’s mission accomplished, assuming Chicago does the right thing and re-signs James Daniels. If they let him walk, then that easy task will turn into a difficult challenge. The added value of re-signing Daniels while also having veteran Cody Whitehair on the roster is that either of them can kick inside to center if the Bears land a top guard in free agency. If Chicago targets a center on the open market, Daniels and Whitehair can remain at guard. That type of positional versatility (which you’ll hear a lot about as a valued trait during NFL draft season) will give the Bears flexibility in free agency. And flexibility, when dealing with dollars and cents, is a great thing.

The Bears, as of now, have five picks in the 2022 NFL draft: Nos. 39, 71, 146, 148, and 185. It could be worse, and the fact they gave up some picks in this year’s draft to land Fields in 2021 makes it all worth it. But that doesn’t mean GM-next should be satisfied with a five-player draft class this year, especially with the important role the draft has for teams in a rebuild. They could look to trade a player with a bloated salary like nose tackle Eddie Goldman for a pick or two. Sure, Goldman is a quality starter who, at times, is one of the team’s most important defenders, but he simply hasn’t been available enough in recent seasons to justify his $11.8 million cap hit in 2022. Goldman missed three games in 2021, opted out in 2020, and hasn’t managed to play a full season since 2018. At 28 years old, he’ll be a coveted player on the trade market who’d likely net the Bears a nice return. If a traditional player trade isn’t in the cards, then it’d make sense for Chicago’s next top decision-maker to trade down from the 39th pick in an effort to add a fourth-rounder to his arsenal. Sure, that isn’t something he’d be able to do in the first few weeks on the job, but with the depth of this year’s draft class offering quality prospects on days two and three, adding more picks in that range would be a wise (and necessary) strategy. None of these priority items are overly complicated or difficult to achieve. It simply takes the right general manager to get it done. The Bears are interviewing just about every possible candidate in the 2022 hiring circuit in an effort to find that person, but the clock is ticking.