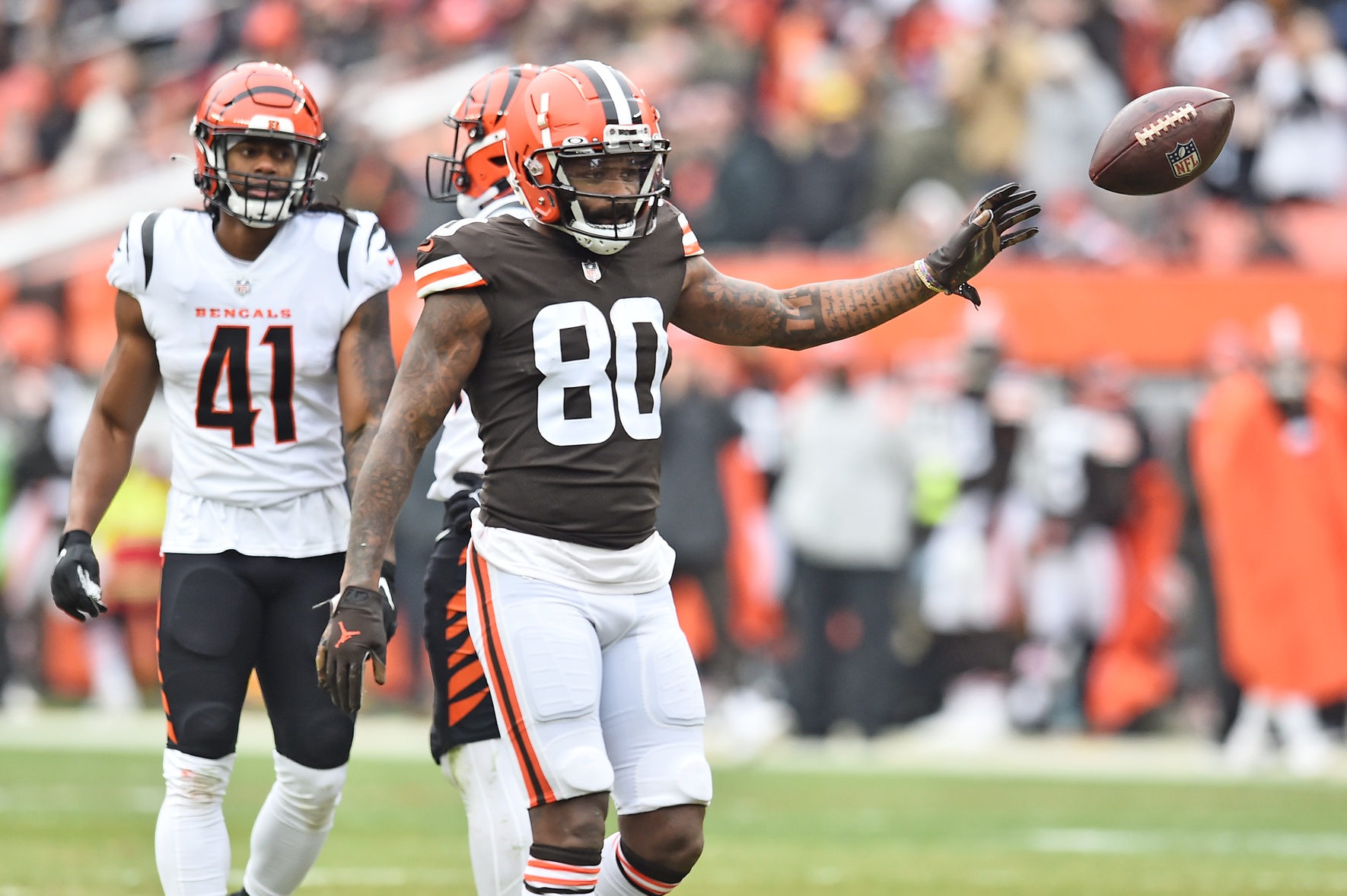 Chicago Bears General Manager Ryan Poles has been very clear about his approach to free agency. He told any fan and media member who’d listen that he’s more likely to be a third-wave kind of guy than a big spender in the first few days – or even weeks – of the process. He’s been true to his word.

We’re about to enter that third wave of free agency now that the dust has settled on the mega-contracts and blockbuster trades around the league. It’s a phase of transactions that extends beyond the NFL Draft when veterans get cut and players who’ve been holding out for a bigger deal are forced to settle with a one-year prove-it contract.

It’s also an opportunity to add legitimate starters on the cheap; at least, players who Poles signs now can serve as bridge starters until this year’s rookies or even the 2023 NFL draft class is ready to step in with the first team.

Here are four quality free agents who remain unsigned that the Bears could target.

Tate is my first choice among the wide receivers who remain unsigned. He’s 6-foot-5, 228 pounds and just 25 years old. His playing time in Cincinnati has been blocked since entering the league as a seventh-round pick in the 2018 draft, but he’s proven in limited opportunities that he can be a legitimate big-bodied target in the NFL.

Tate’s dealt with injuries the last two seasons, including a torn labrum in 2020 that landed him on injured reserve and thigh and calf injuries that limited him to just seven games in 2021. He comes with some injury risk but as a third-wave free agent, he shouldn’t cost much to bring to Chicago on one of those prove-it deals.

Landry is the most established and productive of the wide receivers who remain on the open market. At 29 years old, he likely has a couple of quality seasons left in the tank, even if he’s at the stage of his career where he’s no longer on fantasy managers’ wish lists.

Landry had the worst year of his career in 2021, finishing with 52 catches for 570 yards and two touchdowns. He missed several games with a knee injury and didn’t look like he had the same after-the-catch juice that’s been his trademark. Still, he’d be a marked upgrade over any of the Bears’ current WR3 candidates and a fantastic bailout option for Justin Fields.

Landry may end up having the most expensive price tag among the available wide receivers but for one season, the Bears could do a lot worse.

If Chicago decides to add a veteran offensive tackle before the start of the 2022 season, Fisher would make the most sense. He was the 2013 first-overall pick of Poles’ former employer and returned to action last season after rupturing his Achilles during Kansas City’s 2020 playoff run.

Fisher is a grizzled veteran who offers the athletic profile that Poles prefers in his offensive linemen and at 31 years old, he’s still in his prime by offensive line standards. Terron Armstead just signed a five-year, $75 million contract with the Miami Dolphins at 30 years old and while it’s obvious that Fisher isn’t nearly the player Armstead is, the point remains: an offensive tackle can play at a high level well into their 30s.

The Bears still haven’t revealed their master plan with Teven Jenkins or Larry Borom. Both second-year offensive tackles impressed at times last season but if there’s a chance at an upgrade, Poles should pounce. Fisher could be that guy.

This one is probably the biggest longshot but the Bears haven’t done anything at cornerback so far in free agency. Jaylon Johnson is one of the top young corners in the NFC and Thomas Graham Jr. was one of the Bears’ top rookies in 2021. But it’s a risky strategy to go into next season without a veteran starter opposite Johnson. At the very least, Chicago needs to bring in more competition.

Gilmore played eight games in 2021 after suffering a torn quadriceps in Week 15 of the 2020 season. He isn’t the same player he once was, which was arguably the top cornerback in the NFL, but he’d level up the culture of the Bears’ defensive backfield and, at worst, serve as a fantastic mentor and occasional playmaker.

Cornerbacks with Gilmore’s resume usually end up with big paydays (even in the twilight of their careers), so unless he’s hanging around when we reach the early portion of the summer, it’s unlikely the Bears will cough up his asking price.