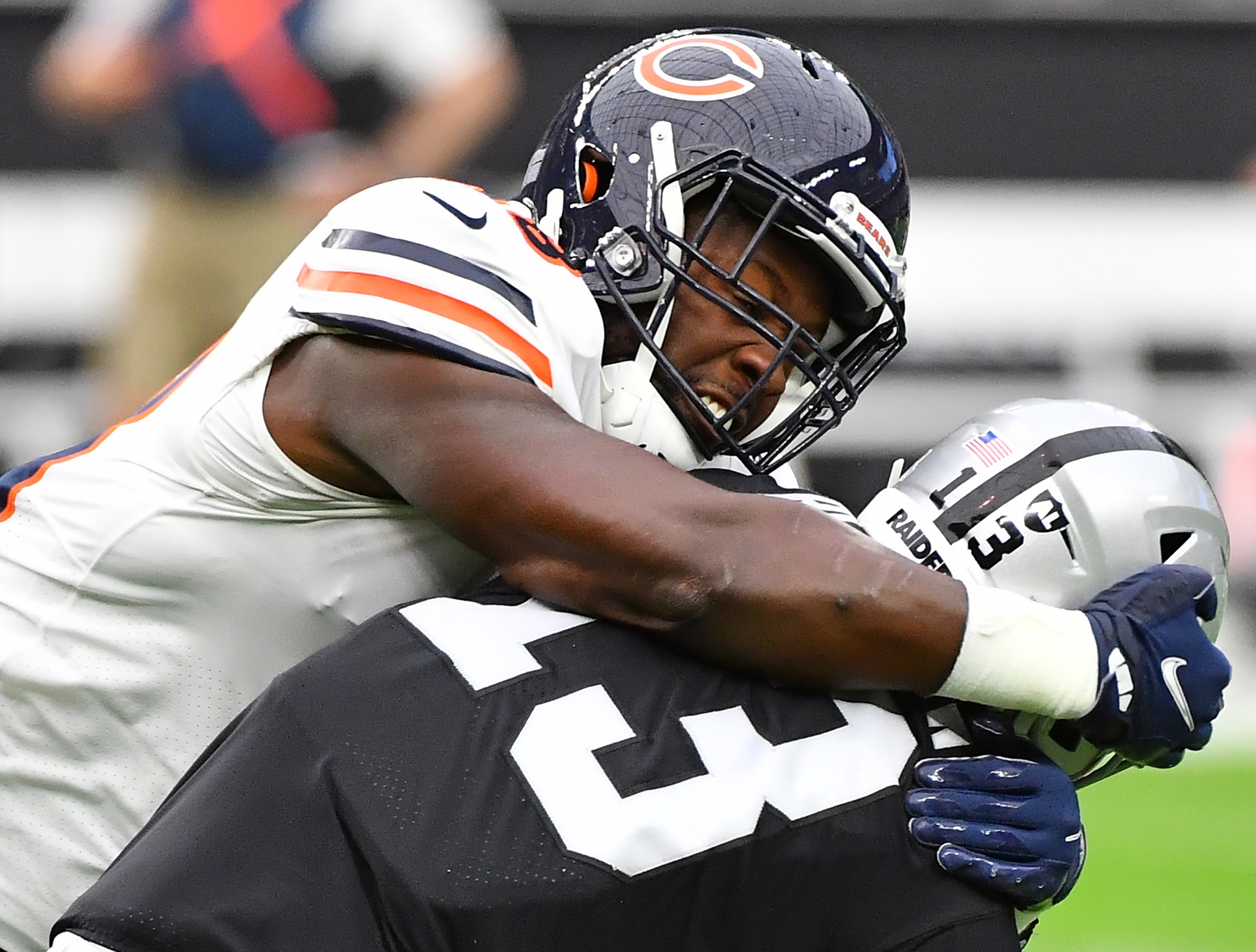 The Chicago Bears’ 2021 season is over. It’s another year with the Bears home for the playoffs, but unlike previous seasons that ended in similar disappointment, this iteration of Chicago has a bright future. Sweeping changes are coming over the next few days, weeks, and months. They’ll occur at all levels of the organization, from the front office to the coaching staff and throughout the roster. But there are a few players who proved this season that they’re critical pieces of the upcoming rebuild. Here are the Bears’ end-of-season awards.

It’s hard to find another player on this team who had as big of a weekly impact as Quinn, who broke the team’s single-season franchise sack record with 18. He was a monster from Week 1 on in what was a masterclass in how to silence critics. Quinn had a disappointing first season with the Bears in 2020 after signing a massive five-year, $70 million contract that offseason. His two total sacks made his deal look like the NFL’s biggest blunder and quickly became one of the first talking points in the case to fire general manager Ryan Pace. Now, one season later, Quinn is an irreplaceable part of the Bears’ defensive plan. He’ll turn 32 years old in May and proved this year that he has plenty of gas left in the tank to be a double-digit sack artist for at least the next couple of years.

Mooney overcame challenging circumstances to become the Bears’ 18th wide receiver in franchise history to record a 1,000-yard receiving season and was the first Bears’ draft pick to accomplish the feat since Alshon Jeffery did it in 2014. Mooney finished his second season in the league with 81 catches for 1,055 yards and four touchdowns. Mooney’s rise to the top of Chicago’s wide receiver pecking order was an unexpected development from the 2021 season. It became blatantly obvious early in the year that he was the go-to guy, a role previously held by veteran Allen Robinson for the last couple of seasons. At just 24 years old, Mooney’s long-term outlook is as bright as any player on the Bears’ offense. With a full season to work with Justin Fields in the starting quarterback role, there’s no telling how big of a season he’s capable of in 2022.

Smith has officially surpassed Khalil Mack and any other Bears defender as the leader of that side of the ball, and it isn’t particularly close. He’s become the tone-setter for a franchise rich in tradition at linebacker, and now four seasons into his career, he’s become the next in line of past greats like Dick Butkus, Mike Singletary, and Brian Urlacher. Smith finished the 2021 season with 163 tackles and three sacks. While his stats are impressive, he’s actually still getting better. He’ll enter the final year of his contract next season and should soon become one of the highest-paid players, if not the highest, at his position in the league.

Rookie of the Year: Justin Fields

Was it a perfect rookie season for Fields? No. But it was certainly good enough to feel confident the Bears have their franchise quarterback in place. He headlined an impressive 2021 rookie class that included offensive tackles Teven Jenkins and Larry Borom, running back Khalil Herbert, and cornerback Thomas Graham Jr. Fields’ rookie year ended with a 58.9% completion percentage, 1,870 passing yards, seven passing touchdowns, and 10 interceptions. Not a great box score, obviously, but the flashes of greatness were there. His rookie year could’ve been even better had he been anointed the starter in training camp and avoided injury. He missed one game with a rib injury, two with an ankle injury, and was forced out of the season finale due to COVID-19. The Bears are Fields’ team moving forward, and it wouldn’t be a surprise if next year this time we’re writing about him being this team’s MVP.