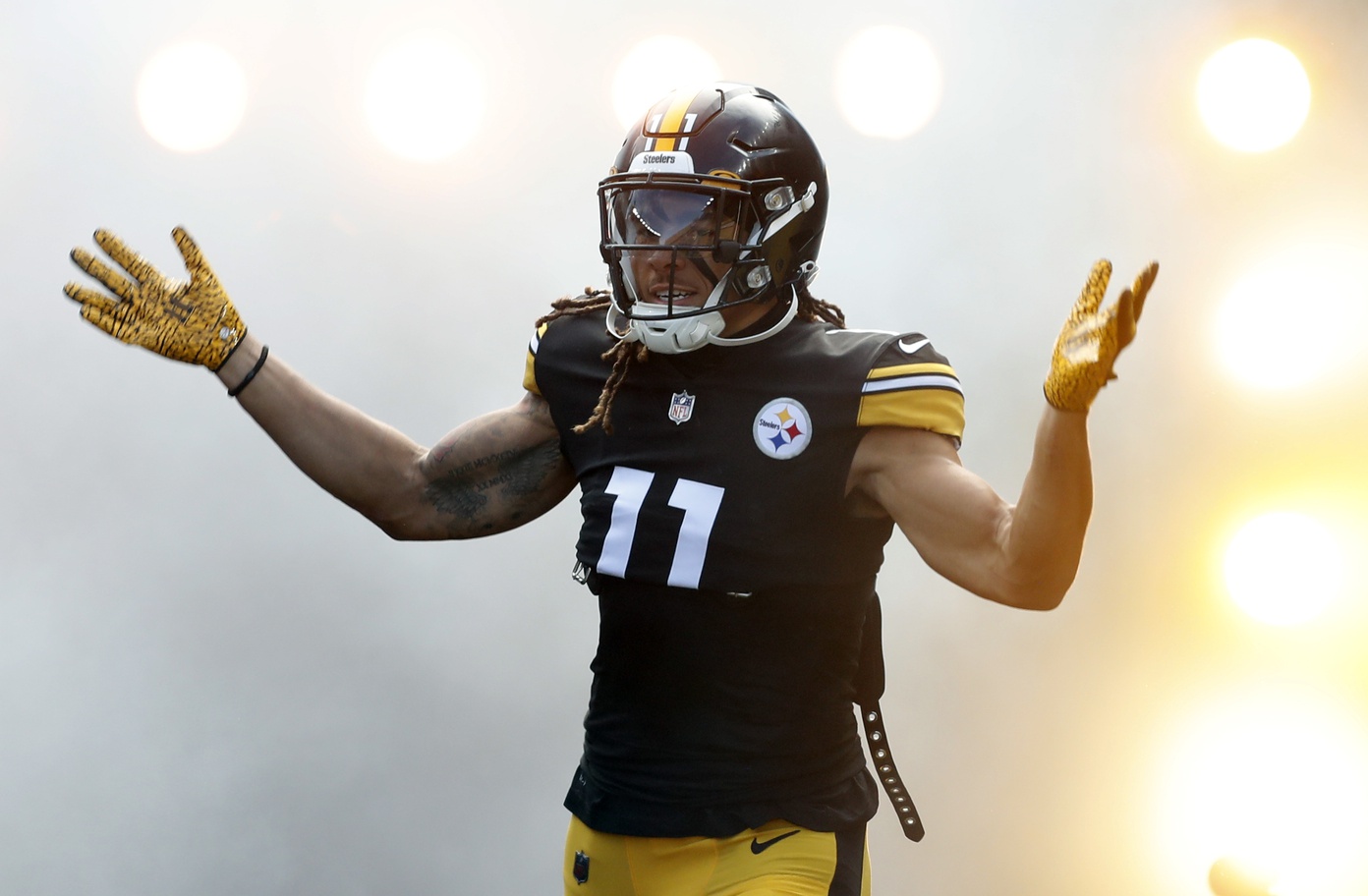 Chase Claypool Could Be Traded To These 3 Teams

Pittsburgh Steelers wide receiver Chase Claypool is a prime candidate to watch ahead of November’s trade deadline, according to multiple reports. Claypool has been surprisingly uninvolved in Pittsburgh’s offense. Claypool has recorded just 23 receptions for 225 yards and one touchdown through six contests. That’s an average of 3.8 catches and 37.5 yards per game.

Claypool enjoyed his best performance of the season (7-96-1) in Sunday’s shocking victory over the Tampa Bay Buccaneers, but it’s safe to say he’s largely been an afterthought in Pittsburgh’s dwindling offense.

Steelers general manager Omar Khan may be a seller at the trade deadline. His Steelers aren’t legitimate postseason contenders and future draft capital will be required to help restore the Steelers to dominance. Claypool is a clear candidate to be moved with Diontae Johnson signed through 2024, and rookie receiver George Pickens emerging as a high-quality starter.

Claypool is capable of dominating on the boundary. He’s on a cost-controlled rookie contract through 2023. We’ve identified three potential landing spots for Claypool’s services.

The Packers have been routinely linked to Claypool throughout this process and it’s easy to understand why. The Packers entered the season with legitimate questions at the pass-catching positions and those concerns have proven fruitful. Second-round rookie Christian Watson remains a raw product that requires time to develop. Watson is currently Green Bay’s ninth-leading receiver with just 52 yards in four appearances.

The Packers have been forced to rely on fourth-round rookie Romeo Doubs and aging veteran Randall Cobb. The Packers are currently averaging nearly 30 yards less per contest (225.8) than they did last season (253.8). Rodgers is 24th in total QBR. The Packers’ passing game needs a shakeup.

Starting quarterback Aaron Rodgers has already proclaimed that he expects his Packers to be buyers at the trade deadline. A wide receiver would be at the top of Rodgers’ wishlist. Packers general manager Brian Gutekunst could satisfy Rodgers’ wish by acquiring Claypool, who would immediately step into a starting role in Green Bay.

Acquiring a receiver at the deadline would help the Cowboys offense create additional opportunities for No. 1 pass-catcher CeeDee Lamb, who has undeniably missed the presence of Amari Cooper opposite him. Opposing defenses are paying extra special attention to Lamb nowadays. Lamb has yet to record his first 100-yard showing of the season. Secondary pass-catching options behind Lamb have been an issue due to an injury to Dalton Schultz and rookie receiver Jalen Tolbert being deemed unfit to contribute.

Michael Gallup is back from injury, but has struggled to make an immediate impact. Through three appearances, Gallup has totaled just eight receptions for 86 yards and a touchdown. That’s an average of 2.6 receptions and 28.6 yards per game. Can the Cowboys’ offense afford to keep waiting on Gallup to recapture his previous form?

Offensive coordinator Kellen Moore is preparing to kick things into high gear with the impending return of starting quarterback Dak Prescott from injury. Prescott will replace Cooper Rush, who finally came back down to earth with a three-interception performance in their primetime loss to the Philadelphia Eagles. Trading for Claypool would be an appropriate way for Jerry Jones to welcome Prescott back into the fold.

Rams head coach Sean McVay runs 11 personnel (three-receiver sets) with more frequency than any other coach in the league. The Rams don’t currently have the personnel to run McVay’s scheme at its potential effectiveness. Van Jefferson is injured and the Rams can’t keep relying on Ben Skowronek. Allen Robinson is looking like a free-agent bust. Robinson has been held to 12 or fewer receiving yards in three of the Rams’ six games.

The Rams have been linked with potentially reuniting with Odell Beckham Jr. in free agency, but it’s no longer the sure thing it once appeared to be. The Rams’ current struggles may scare Beckham away, who allegedly has a list of would-be suitors, one that reportedly includes the Kansas City Chiefs. Rams general manager Les Snead may have to pivot away from Beckham and consider acquiring a receiver like Claypool instead.

The Rams may also consider acquiring an offensive lineman at the deadline. Their front five has struggled to offer any sort of protection and left tackle Joseph Noteboom recently suffered a season-ending injury. Expect the Rams to acquire offensive help prior to the deadline, whether at receiver or across their offensive line.