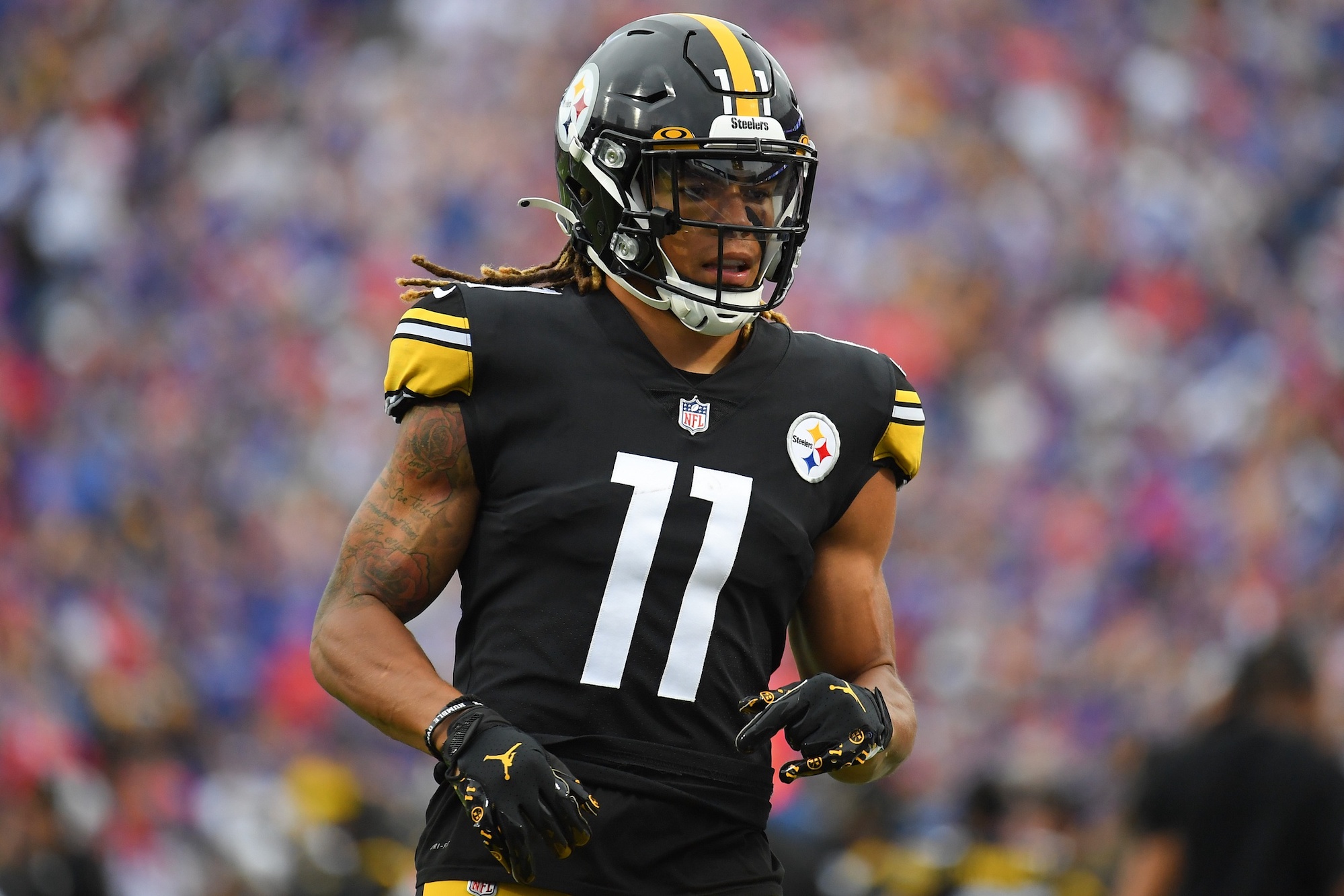 Where Does Chase Claypool Rank Among Top NFL WRs?

Pittsburgh Steelers wide receiver Chase Claypool caused quite the uproar during a recent appearance on the popular I AM ATHLETE podcast, which is hosted by former NFL legend Brandon Marshall. The Abbotsford, British Columbia native claimed to be a top-three receiver in the league. It qualifies as a lofty self-evaluation.

We admire Claypool’s confidence, but both the eye test and numbers tell another story. Claypool finished the 2021 regular season ranked 35th in receiving yards (860), 53rd in receptions (59), and perhaps most damaging to his claims, tied for 178th in touchdowns (two). Claypool certainly isn’t a top-three receiver in the NFL, although he is better than these numbers suggest.

As of now, Claypool should be considered a top-30 receiver in the league, with room to elevate himself into the top 20 with a strong 2022 campaign. Claypool doesn’t currently belong in the same group as Cooper Kupp, Davante Adams, and Tyreek Hill. He’s preparing to enter a crucial third season that could shift public opinion. For what it’s worth, Claypool acknowledged his struggles throughout 2021 via additional comments made on Marshall’s podcast.

It’s worth noting the Steelers didn’t do Claypool any favors last season. An aging Ben Roethlisberger struggled mightily under center, which hampered Claypool’s chances of capturing the desired consistency. Pittsburgh’s passing offense often looked downright broken for long stretches of the regular season as offensive coordinator Matt Canada failed to find a workaround for Roethlisberger’s diminishing physical abilities. The Steelers ranked a middling 15th in passing yards per contest (222.2) and Roethlisberger averaged just 6.2 passing yards per attempt, which was the second-lowest total of his 18-year career. It ranked 29th among all quarterbacks last season (with qualifiers). Roethlisberger’s 22 regular-season touchdowns in 16 appearances also represented one of the worst marks of his modern-day career.

Although Roethlisberger’s departure clears a potential pathway for Claypool to catapult his play to the desired level, more questions have arisen at the quarterback position for the Steelers that could threaten Claypool’s chances of meeting his own expectations. The Steelers drafted quarterback Kenny Pickett with a first-round selection in the 2022 NFL Draft. Drafting a rookie quarterback always welcomes an element of the unknown, and Pickett is expected to begin the regular season on the bench.

Initially replacing Roethlisberger under center will be stop-gap option Mitchell Trubisky, who signed a two-year contract with the Steelers earlier this offseason. Trubisky qualifies as an intriguing reclamation project after rehabilitating his reputation as a member of the Buffalo Bills in 2021. Trubisky allegedly joins the Steelers as an improved quarterback from the one who failed miserably in Chicago, but the jury is still out on Trubisky’s upside and overall effectiveness as a starting signal-caller.

It’s also a big season for Canada himself. Canada’s offense has been big on eye candy with a penchant for pre-snap motion, but it’s been short on actual production and efficiency. Head Coach Mike Tomlin has stood by Canada, but the leash is getting shorter. Canada is tasked with getting more out of Claypool going forward, and the likes of Najee Harris and Diontae Johnson, too.

Asked to give his prediction for the upcoming season, Claypool noted he’s chasing 1,300 yards and 10-plus touchdowns. Claypool’s self-confidence is evident, and we’ll follow his 2022 season with terrific intrigue. The third-year pro could take another sizable step forward this season, but the same less-than-desirable factors that hindered his ability to reach his ceiling in 2021 could threaten to detail his plans for a second consecutive season in 2022.