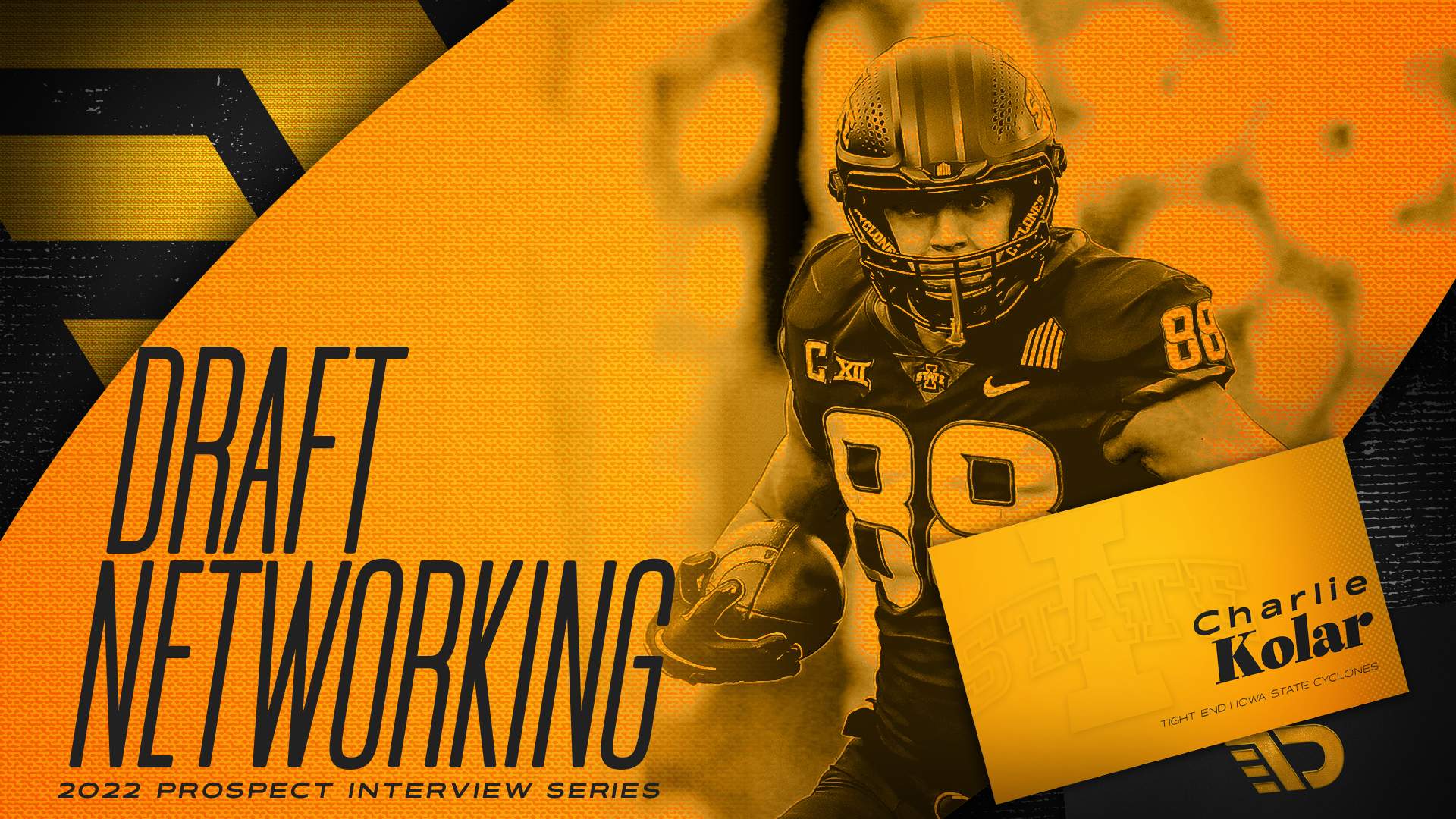 NFL franchises are constantly searching for versatile tight ends that can play multiple roles for them offensively. An athletic pass-catcher that also doubles as a throwback traditional in-line blocker adds a ton of value to a tight end room. There aren’t many well-rounded collegiate tight ends these days, but Iowa State’s Charlie Kolar is that type of player in the 2022 NFL Draft.

Kolar’s ability to stretch the seam vertically on one snap and create a lane for his running back to run through on the very next play will have teams jockeying for position to draft him.

Kolar recently spoke exclusively with The Draft Network about his career-best season in 2021, his academic achievements, why he enjoys blocking in the run game, his favorite route to run, how he creates separation against athletic defenders, and so much more.

JM: I thought you played your best season in 2021, having recorded career highs in receptions (62) and yards (756) while also scoring six touchdowns. What allowed you to take that step forward?

CK: It was my fourth and final season and I certainly felt more comfortable with our scheme and my role within our offense. I understood the offense better. I got bigger, faster, and stronger throughout the offseason. I think I was ultimately just in a better position to make impact plays. My previous experiences certainly helped me as well.

JM: You were the recipient of the prestigious ISU Alumni Associations Wallace E. Barron All-University Senior Award, given annually to seniors who display high character, outstanding achievement in academics, and university/community activities. What does it say about the legacy you leave behind at Iowa State?

I don’t care much for my personal legacy. I care about the legacy we left behind at Iowa State as a group. I believe we came into that place together and improved the culture. We had success, and that’s something I’m proud of. Together we helped leave the program in a better overall state than it was in when we first arrived. That’s what matters to me.

JM: As you should be. You do terrific work in the run game. It pops on tape. You possess the skill set necessary to play as an in-line blocker. You don’t find many tight ends who are polished as blockers at the collegiate level nowadays, but you’re an exception. What do you enjoy about that?

CK: I appreciate your compliments, but I personally think I still have a lot of work to do as a blocker (laughs). I have to get better. I’ve always been willing to do whatever necessary in order to help the team win games.

Breece Hall is such a talented running back that all we really had to give him was a sliver of a window in order for him to make something special happen with the ball in his hands. I tried to help create edges on front side runs, or seal something off on the backside, or block in space as I attempted to give our other receivers or Purdy a chance to make something happen. Having that opportunity was all I could ask for when I joined Iowa State originally.

JM: You’re clearly a selfless player. In the passing game, you run crisp routes and have extremely reliable hands. You may have the best hands of any tight end in this class. What goes into being such a reliable hands catcher?

CK: It really just comes down to repetition. Our coaching staff did a fantastic job of coaching the techniques required to catch the football at an efficient rate. It’s about knowing where your eyes and hands are at all times.

There are a ton of little things that go into that. I would even say the way you catch the ball, and which different parts of your hands you catch the ball with. The angles of your hands based on which direction the ball is coming from matters a ton as well. Having coaches that understood how to coach and develop those techniques helped me a bunch throughout the years.

CK: Whichever route gets me the ball is fine by me I guess (laughs). I really don’t have a preference to be honest with you. I don’t enjoy one route more than the next. I thoroughly enjoy most of the routes. They all give you a chance to beat a defensive back one-v-one in isolated situations. I always welcome that opportunity.

JM: What are some of the ways you look to create separation within your routes?

CK: I think that’s a great question because, for the most part, tight ends don’t run 4.2s and 4.3s. It places a heightened amount of importance on being a nuanced route-runner that pays close attention to detail.

Even the fastest of tight ends and I think I’m a pretty fast tight end myself, but even then, our defensive back counterparts are typically faster. We’re not able to simply run past defensive backs on a snap-by-snap basis. We talk about taking away separation in order to create separation.

You want to step on that defensive back’s toes and get into his body. You want to be physical and create a sense of doubt by giving him different stems or stacks. Sprinkling some of that throughout your route running is key.

A great route-runner is one that is comfortable with contact. You have to get into defensive backs. You can’t just run away from them all the time. When you get into him, especially if you’re longer and/or bigger than him, you can get your body to create separation. All it takes is a yard or two.

I think that’s one of the biggest things I’ve learned throughout the years. You have to be comfortable even when you don’t have separation in the initial part of the route in order to create separation later in the route. That’s one thing I learned a lot in college.

JM: You’re clearly such a smart route -runner that understands the art behind it. What are three traits a successful tight end must possess at the next level?

CK: I’ll give you two different sets of answers. Toughness, athleticism, and perseverance come to mind. Because those are more overall traits, I have three specific ones to the tight end position. You have to be able to block. You have to run good routes. Last but not least, you have to be able to catch the ball, and make a play after the catch. Those are essentially two different sets of answers for your question (laughs).

JM: If you could sit down and pick the brain of any tight end in today’s game, who would you choose and why?

CK: That’s tough. If I had to choose one, I’d probably say Travis Kelce. Boy, that’s tough. I might want to go even further back and say Antonio Gates or Jason Witten. As far as current-day goes, I’ll stick with Kelce.

I think he’s an incredible route-runner. It somehow never looks like he’s running full speed, but he’s always open once he breaks out of that route (laughs). I’d love to ask him about the way he stems and stacks. I also think he does a good job blocking when he’s asked to do it. We don’t always fully recognize that area of his game because Kansas City’s offense rarely asks him to block. He cuts guys off on the backside of runs when asked to do it. He helps his teammates. He’s a well-rounded tight end and I’d love to pick his brain.

JM: That’s a terrific choice. I’ve really appreciated your time today. What kind of impact is Charlie Kolar going to make at the next level?

CK: Hopefully a big one (laughs).