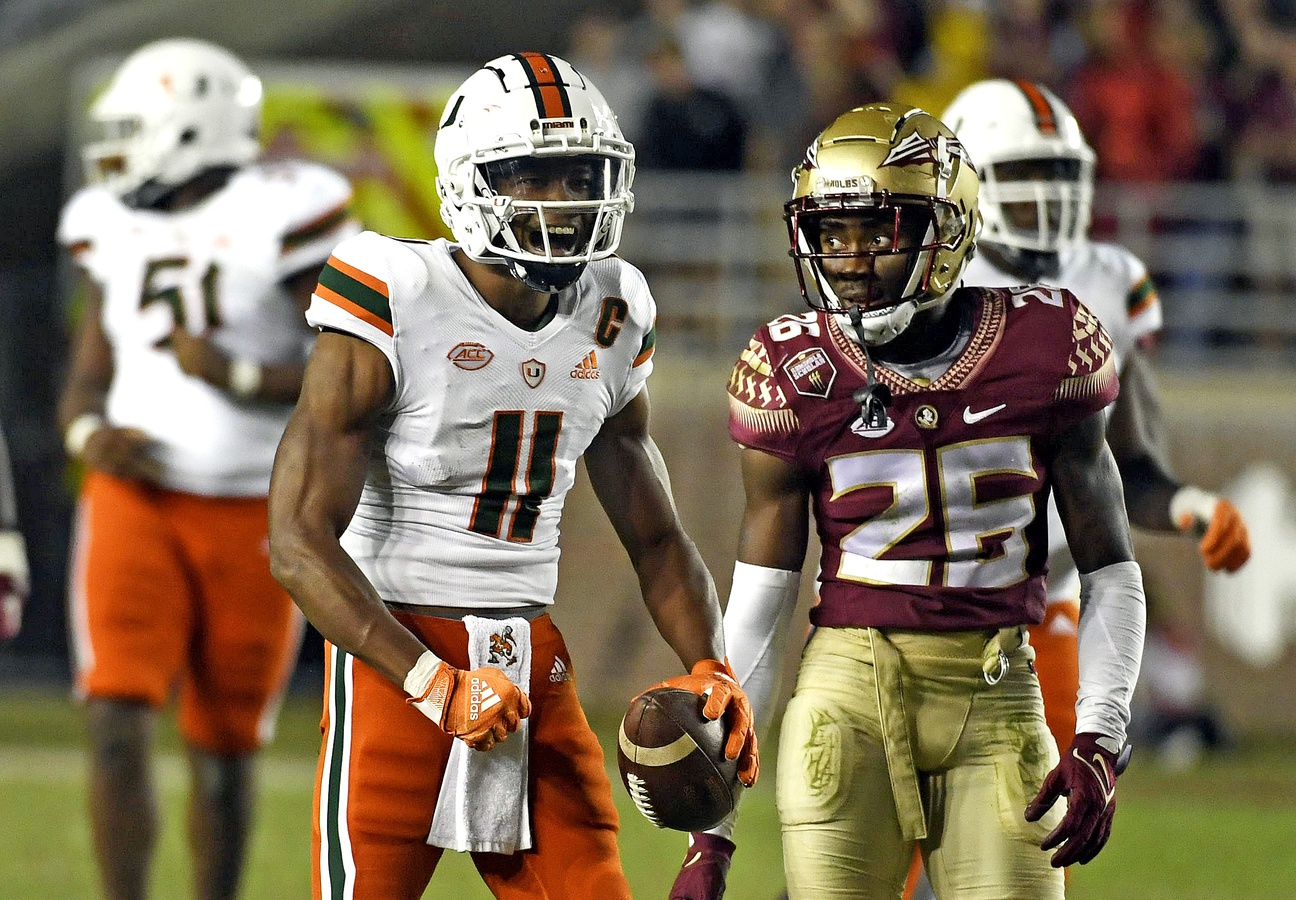 Whether it was the flashy plays that he made in the dynamic Oklahoma passing offense or the spirited ways the announcer Gus Johnson spoke of those dazzling moments, wide receiver Charleston Rambo has been a household name in the landscape of college football over the past several seasons. But for all of the moments that stood out during his time with the Sooners, his inconsistencies overshadowed the plays he did make. Getting open wasn’t much of an issue for Rambo in the Big 12 considering both the style of offense that Oklahoma ran and how opponents lined up, it was being consistent at the catch point. Whether it was drops, double-catches, or issues finishing in traffic, there was too much variance for him to be taken seriously as an NFL receiving prospect. Despite all the quarterback talent and offensive scheme prowess at Oklahoma, Rambo transferred to Miami ahead of the 2021 season and completely changed the narrative around his draft stock. Hauling in 79 receptions for 1,165 yards and seven touchdowns for Miami in 2021, Rambo set a new single-season program record for receptions. You read that correctly. More than the likes of Reggie Wayne, Andre Johnson, Michael Ervin, Santana Moss, or any of the great receivers to come through the program. His 79 catches in 2021 for Miami were three more than he had across his three seasons with Oklahoma. What makes the feat even more impressive is that not only was it Rambo’s first season with the program, but the quarterback position took an unexpected shift after just three games. D’Eriq King was expected to be the starter for Miami but he suffered an injury before Jake Garcia started one game and freshman Tyler Van Dyke played the remainder of the season. While the production for Rambo was impressive in 2021, it’s the story that the numbers tell that matters most when considering him as an NFL prospect. His game tape revealed a considerably more consistent player when it comes to catching the football and finishing plays, even through contact. In addition, his route-running was notably improved, including his ability to process and adjust on the fly and manipulate man coverage. With the improvements as a route-runner and at the catch point, it becomes much easier to appreciate the ancillary components of his game which includes his competitive toughness as a blocker and with the ball in his hands. Rambo’s ascension and stabilization as a prospect continued during the opening session of East-West Shrine Bowl practices where he was the standout of day one for the East offense during team drills. In his first-ever practice with an entirely new supporting cast, Rambo collected three receptions. The first two were excellent timing routes where he quickly got open and secured the football away from his frame with plucky hands. His third reception during team drills was the play of the day. https://twitter.com/BrettKollmann/status/1487492806255910933 With plenty of space to operate, Rambo takes an outside release and does well to stack the corner vertically. From there it’s about finding the football, making an adjustment, and finishing the play with extension while tucking the football away to survive the ground. In many ways, this standout play is an embodiment of how Rambo has grown as a football player. When preparing for the Shrine Bowl practices with our scouting staff, I shared that the key for Rambo this week was to continue proving that the player we saw on the field in 2021 for Miami is who he is moving forward. With one day now in the books, he’s doing exactly that while continuing to elevate his draft stock in the process.