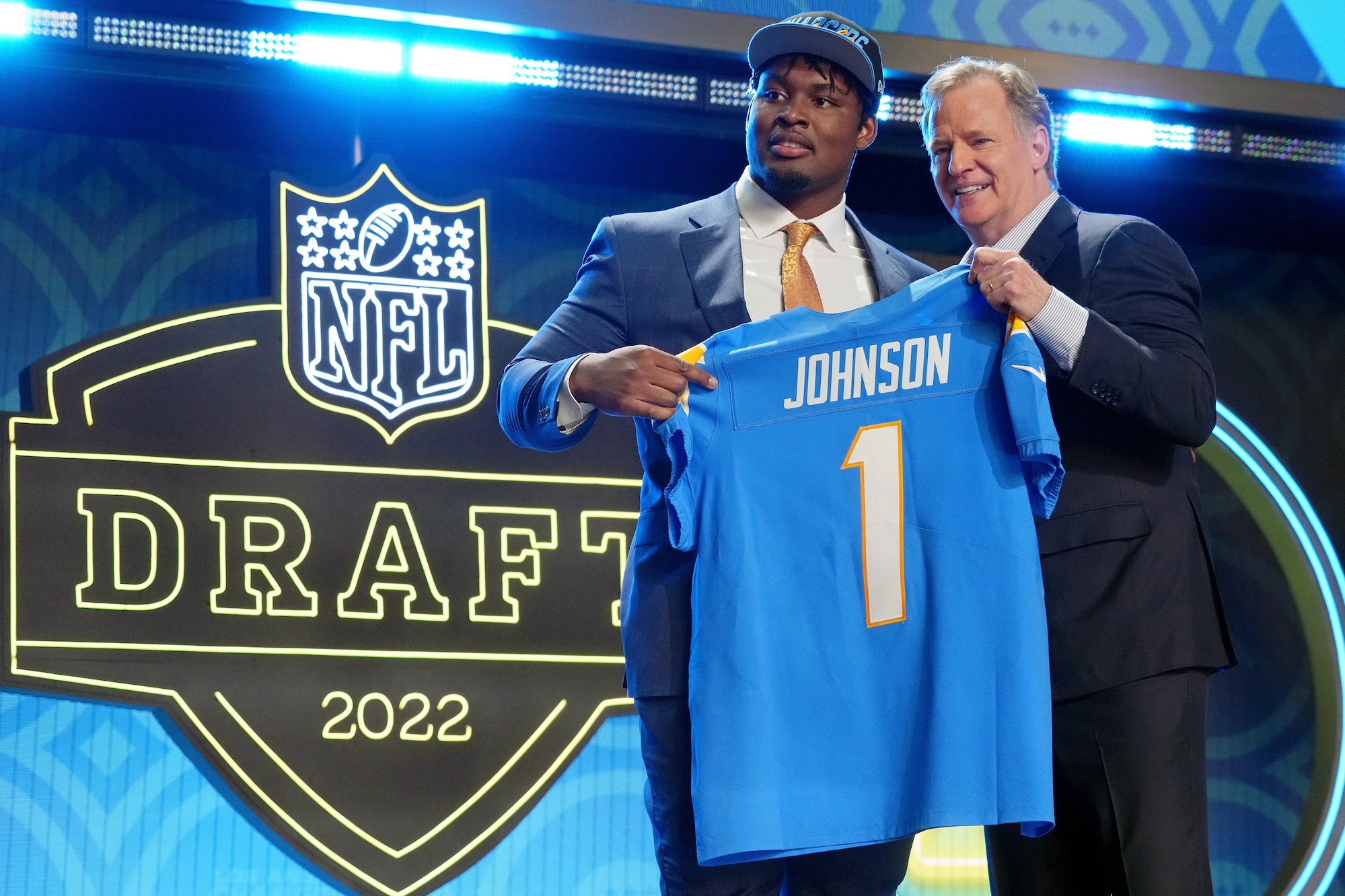 The Los Angeles Chargers are a team that’s firmly in win-now mode and have lofty expectations entering year three of quarterback Justin Herbert’s career. The team narrowly missed the postseason last year and all they have done since is add a future Hall of Famer in Khalil Mack, a Pro Bowl level corner in J.C Jackson and re-sign talented receiver Mike Williams. The team still had a number of holes to address through the draft in order to ensure this team had all it needed to compete in a loaded AFC. With a quarterback ready to take over the league, the Chargers could not afford to miss on these draft picks. Let’s take a look at how they did with these Chargers 2022 draft grades.

A bit of a surprise pick on draft night but one that makes a ton of sense. Entering the draft, the Chargers had two major holes along their offensive line at right guard and then at right tackle. Many thought the Chargers might address right tackle by taking Trevor Penning, but ultimately, Johnson was the highest-graded player available at No. 17.

Johnson has starting experience at both tackle and guard and even showed some ability at center during the Senior Bowl. For the Chargers, he projects as the team’s starting right guard from day one and will shore up the team’s interior, further protecting Justin Hebert and helping this run game get going. Overall, while this pick may not be flashy, I think it’s one that will pay massive dividends.

I am a huge fan of this pick as the Chargers select a very talented player that also fills a big need. The Chargers are set at one safety position with All-Pro Derwin James set to return as the leader of the Chargers defense, but the team has yet to find a reliable running mate to pair alongside James. I believe the Chargers may have just found that guy in Woods.

Woods is an ultra-fast and rangy safety who has outstanding ball production. He is a playmaker in the backend of the defense who should be able to thrive playing deep and capitalizing on errant throws due to the Chargers’ elite pass rush. He is a tough tackler even though he likes size and strength, and he will bring a swagger to the defense that meshes with players like James and Asante Samuel. Look for Woods to find time early on in his career as his speed and ball skills will be too hard to keep off the field.

This really could be my favorite pick of the entire draft. Spiller was my No. 1 back and a top-40 player on my big board and the Chargers somehow got him in the fourth round. Now, I get it. Spiller ran a slow 40 time and because of that, he slipped in the eyes of NFL evaluators. But, other than that, what weaknesses does Spiller have?

He’s a big, physical runner with excellent contact balance and impressive lateral agility for a back his size. He is a back-to-back 1,000-yard rusher in the SEC and has shown an ability to be effective on all three downs. The Chargers knew they needed to get better behind Austin Ekeler and they couldn’t have done a better job to me than Spiller. Absolute home run.

Shortly after the draft, the Chargers announced that they were declining the fifth-year club option on former first-round pick Jerry Tillery. Tillery has been highly disappointing, and the team knew they needed to add depth to the interior of their defensive line. Ogbonnia is a talented run defender who is still finding his way in the passing game. He will likely see time in the rotation behind free-agent additions Austin Johnson and Sebastian Joseph-Day.

Around the midway point of the fourth round, I started looking up at our TDN Big Board and noticed that Salyer was still available—and I was shocked. How could a talented two-year starting left tackle in the SEC with good size and length and an ability to kick inside to guard still be on the board?

Well, apparently Salyer’s fall was due to injury concerns which makes sense because based on film alone he should have been long gone by the sixth round. Salyer has the versatility to develop into a starting level right tackle or guard should his medicals check out. He is yet another excellent addition to the Chargers’ offense.

This pick was a bit of a reach as Taylor looked like more of a UDFA than a draft pick, but in the sixth round, we are splitting hairs. Taylor is a long and physical bump-and-run corner who will bring toughness to the secondary. He is unlikely to contribute in the rotation and will have to make a living on special teams to earn a roster spot.

This is another developmental corner for the Chargers late. Leonard has excellent speed, running a 4.37 40, and shows good fluidity in his movements. Again, he is unlikely to make the rotation as a rookie but his straight-line speed and competitiveness should allow him to be a contributor on special teams.

This was a strange pick. The team already has Gabe Nabers as a fullback so adding Hovarth was a head-scratcher. That being said, it’s the seventh round so it’s hard to judge this pick. He simply may have been the highest player available. Special teams will have to be where Hovarth earns his keep.