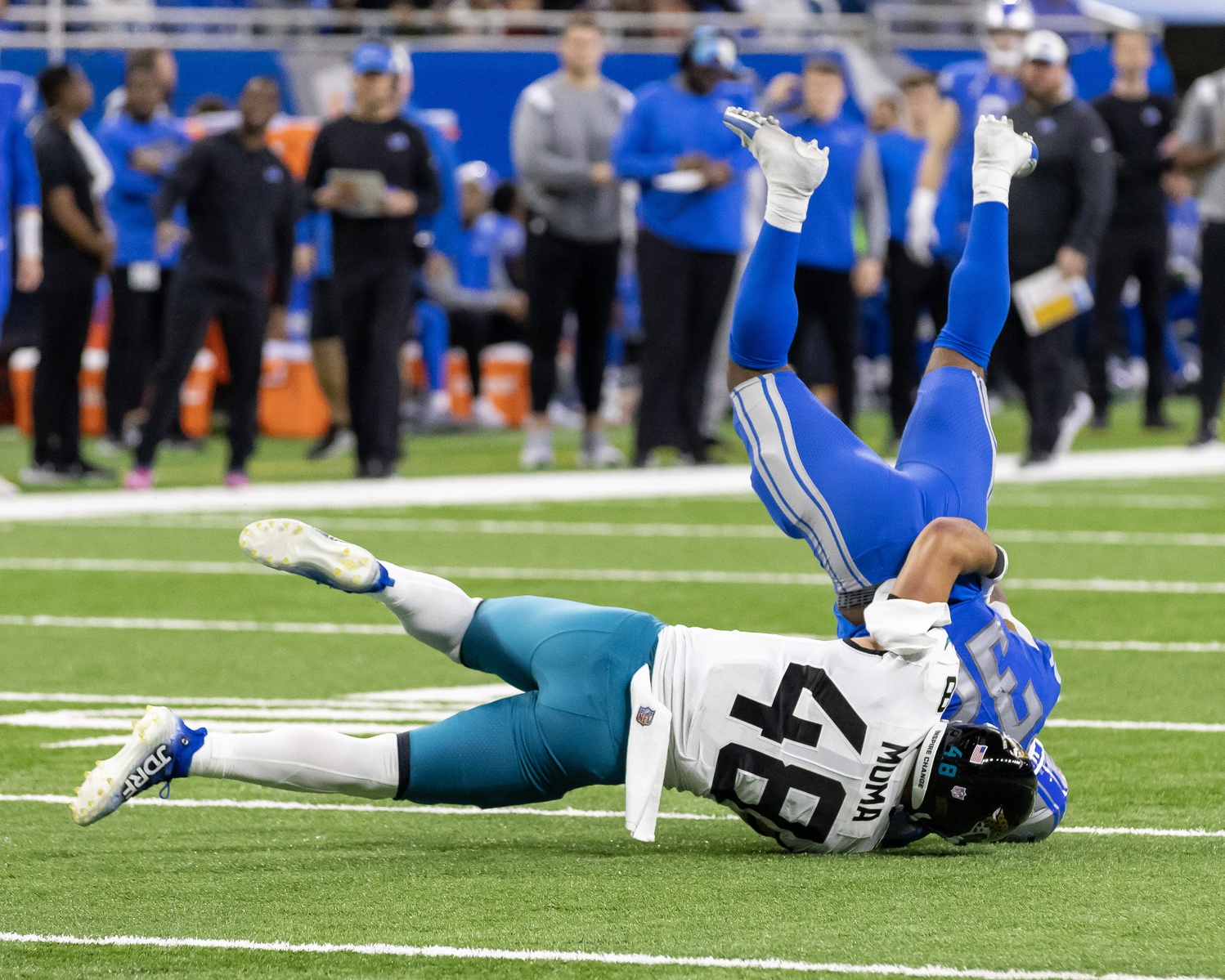 The Jacksonville Jaguars initiated the Chad Muma era last week after fellow rookie linebacker Devin Lloyd started to experience some struggles on defense. After his performance in Week 13 against the Detroit Lions, there’s no reason for the team to look back.

Muma’s first start was relatively quiet with nine tackles and not much else, though he notably played 100% of the team’s defensive snaps against Baltimore last week. Jaguars defensive coordinator Mike Caldwell also gave him credit for “settling everything down” from the MIKE linebacker position, which allowed Foye Oluokun to have a big game of his own. It was enough to earn Muma a second straight start. Fortunately for both the linebacker and the team, he took full advantage of the opportunity.

It’s true that the Jaguars had an overall brutal Sunday on defense. Per NFL Network’s Andrew Siciliano, the Lions were the first team to score on every possession in a regular-season game in four years. One of the biggest (and only) bright spots for Jacksonville on Sunday was Muma, the rookie linebacker out of Wyoming, who had a breakout performance in his second career start.

Muma recorded 11 combined tackles on Sunday, including two tackles for a loss and his first career sack (and a half) against the Lions before injuring his ankle in the second half. His 1.5 sacks immediately put him in the Jaguars’ top five in sack totals this year. Muma has already surpassed one of this year’s first-round rookies in sacks, Lloyd (0 sacks), and is just one short of the total of his other first-round rookie teammate (and this year’s No. 1 overall pick), Travon Walker, despite starting in just two games.

One of the plays that best showed off Muma’s potential in Sunday’s game was his tackle for a loss on Lions starting running back D’Andre Swift on a play inside the Jags’ own 10-yard line.

Chad Muma is really good at defending the run. Seeing and knowing those gaps then shoots pic.twitter.com/fnXtarBRmn

The Lions ran some kind of counter concept on the play with the pulling blocker being wide receiver Amon-Ra St. Brown. What was most impressive by Muma here was how well he read the play. Rather than overpursuing to the right side when quarterback Jared Goff opened up that way off of the snap, the rookie linebacker immediately started moving laterally, scraping across the line of scrimmage to his left. Once he recognized the gap that opened up as St. Brown kicked out to block the cornerback, Muma shot through it, broke down his feet, and made a nice tackle for a one-yard loss despite Swift’s spin move attempt.

Detroit may have scored one play later, but plays like the one Muma made are what the Jaguars have desperately needed from more of their defenders this season. Jacksonville is near the bottom of the NFL in opponent red zone scoring percentage and dead last in that category on the road despite heavily investing draft capital and money into their defense this offseason. One first-round pick, Lloyd, has already been benched in favor of Muma, a third-rounder.

Muma is already providing more of a spark to their front seven in two starts than Lloyd has all season, meaning he now has a real chance to step up as a leader for this rebuilding defense going forward. As the Jaguars’ other defensive investments continue to struggle, it will be up to him to make some more big defensive plays once he returns from this ankle injury. If his performance in Detroit on Sunday is any indication, Chad Muma is more than up for the task.