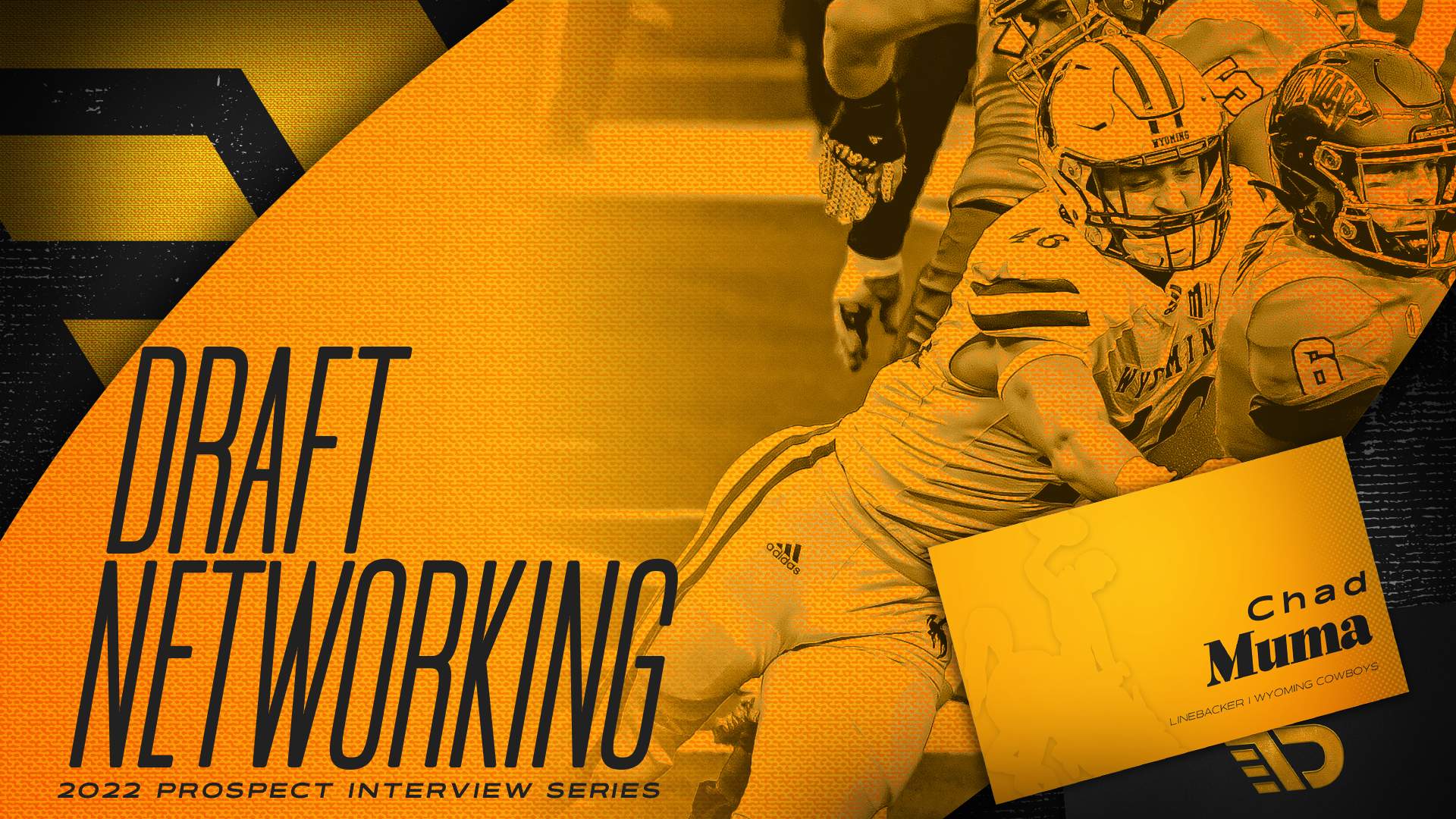 Wyoming’s Chad Muma is one of the most athletic, productive, and instinctive pro-ready linebackers in the 2022 NFL Draft. A tackle machine for the Cowboys, Muma enters the draft with several years of excellent tape under his belt.

Muma recently spoke with The Draft Network regarding his combine experience and performance, which teams have shown interest in him throughout the process, what he loves about playing the linebacker position, and so much more.

JM: You were unbelievable at the combine. The 40-inch vertical and 129-inch broad jump were truly elite results. I thought the 40-yard dash time of 4.63 seconds was very good as well. How would you grade your overall performance?

CM: I was happy with my overall performance. I had all these goals going into the event, ideas of the numbers I wanted to hit and I essentially exceeded all of those expectations in relation to my vertical and broad jumps. With my 40 time, I was spot on with how I expected to run. I was happy with how I performed.

JM: How would you describe the experience, and what was your biggest takeaway from the combine?

CM: The experience was great. I’ve been watching the combine since I was a little kid and I’ve always pictured myself performing on the field. My biggest takeaway was that there’s a lot more stuff behind the scenes than people realize (laughs). There’s a lot of medical stuff and checks, there’s a lot of waiting around throughout the medical process. It was a great experience overall. To be able to actually meet with teams in person was awesome, actual coaches, and general managers. That interview time was great. That was definitely a special part of the experience.

JM: The interview aspect plays a huge role in the overall combine experience. On that topic, which teams did you meet with formally, and do you have any virtual meetings coming up?

CM: I did meet formally with the Buffalo Bills and Washington Commanders at the combine. I have a virtual Zoom meeting with the Atlanta Falcons later this week. I know a lot of teams and coaches are planning to travel to my pro day, and they plan to schedule some more meetings and interviews with me there. We may do some lunch or some film work and things of that nature. I may head to dinner with some teams. I’m excited for the process.

JM: There’s a lot of interest in you and it’s easy to see why. You’re more than an athlete. You play the game with terrific instincts in the box. How did you develop that aspect of your game?

CM: I think it’s all in my preparation. I’ve been playing football since I was six years old. It mostly has to do with how I prepare for the game. I love going through my film preparation. I’m able to pick up on things based on different formations and certain keys. If they’re in a certain set, I’m able to identify that they’re about to run this play. I can judge things based on their alignments on the field. Whatever it is, I pick up on a ton of stuff during film study. I’m always looking to identify little things that can tip the hand pre-snap. I love knowing what play is going to come before it even happens.

JM: We saw that on tape from you. What’s your favorite aspect of playing the linebacker position?

CM: I love the whole communication aspect of it. You’re essentially the quarterback of the defense. You have to make all of the calls and checks. You have to be locked into what everyone on the field is supposed to do. At the linebacker position, you can make plays against the run by hitting someone pretty hard, and you also have the ability to drop in coverage and impact the passing game as well by making an interception.

JM: You bring me to my next question. Being able to play as a coverage linebacker is super important in today’s pass-happy league. You have the range and instincts to do that. What can you tell me about your abilities in coverage?

CM: I think I’ve always understood how and where teams are trying to attack us via the passing game based on what coverage we’re playing. It gives me an advantage and it allows me a peek into what the quarterback may be thinking. For example, if it’s Cover 3, the offense might try to attack with that bend route coming across with a dig behind. Understanding that helps me see what the quarterback is seeing in the passing game. What coverage we’re in always helps me. All of this can help me potentially bait the quarterback into an interception or an errant throw.

JM: You’re obviously a student of the game. What can you tell me about the scheme Wyoming ran on defense and what your coaches asked of you?

CM: For our scheme, we ran a 4-2-5 most of the time. With what we had going on, our base coverage was basically a Cover 3. A lot of the time, we’d be in a Cover 3 with four underneath match where we had our three deep principles with a match-zone underneath.

What my staff asked of me personally, I was the player asked to make sure the calls were correct as the MIKE of the defense. I had to make sure that everyone was lined up correctly. The sentence we always said was, “The MIKE is never wrong.” whatever I said on the field, goes. If the coaches wanted things done differently, we’d correct it after the play, but I had that freedom. They asked me to make those calls. Whatever I was seeing, I communicated that with the rest of our defense. The coaches would then communicate with me when necessary.

JM: They placed a ton of trust in you. You love to tackle. It’s evident on tape that you don’t shy away from the physical aspects of the game. What do you enjoy about tackling?

CM: I love the physicality of it. When that ball gets out there, it’s my job to go tackle the ball-carrier, and it doesn’t matter where he’s at on the field. I definitely love the part of going to hit someone the most. It’s such a great feeling as the MIKE linebacker. Wherever I’m at on the field, I’ve always felt that it’s my responsibility to go make that tackle. It doesn’t matter how much grass I have to cover, I have to go try to make that tackle no matter which part of the field I started at.

JM: Your effort and physicality pop on tape. What was the best game you ever played in a Wyoming jersey and why?

CM: Gosh, you have me thinking of different moments in every single game. This year specifically, I think about my first career pick-six against NIU. I had another pick-six against Ball State. Montana State was a great team game. The Utah State game was a great defensive performance for us. They won our conference and we shut them down defensively. It was a great game for everyone. I think back to my junior year when we played against UNLV and I had three sacks and however many tackles. All of those games and moments stand out for different reasons.

JM: I’m glad I could make you reminisce about those moments. Some people still view Wyoming as a small school, and they’ll refer to you as a “small-school prospect.” How do you typically respond to that?

CM: I think we saw the competition that occurred in the Mountain West, especially this past season. The majority of Mountain West schools were beating Power 5 schools throughout our out-of-conference games. For that stigma to still be there, for those who still consider Mountain West schools to be small schools, I just think that’s kind of outdated and unfair. That’s not the best way to characterize us anymore. What I’m saying is reflected by how many Mountain West teams were playing in bowl games this past season. We were beating Power 5 teams and we’ve had a ton of success at every level. We’re sending some excellent prospects to the NFL draft, too.

For myself personally, playing at the Senior Bowl provided me with a terrific opportunity to sorta debunk that. I flashed my skill set out there and proved that I’m still the same instinctive and productive player when you surround me with prospects from bigger programs. I can compete against anyone, and I’ve proven that at the Senior Bowl and combine. It speaks for itself.

JM: That’s the best way to answer that question. I’ve really appreciated your time today. This conversation has perfectly captured why you’re going to be an excellent linebacker in the NFL. In closing, what kind of impact is Chad Muma going to make at the next level?

CM: I’m going to make a huge impact. I 100% believe in myself. I understand how I operate and how I work. Wherever I’m at and wherever I end up, I’m going to put my best foot forward and pour my blood, sweat, and tears into this, both on and off the field. I’m going to be the same way in the film room and in the weight room. I just can’t wait to hit the ground running. I’m going to attack every aspect of the process on the road to greatness.