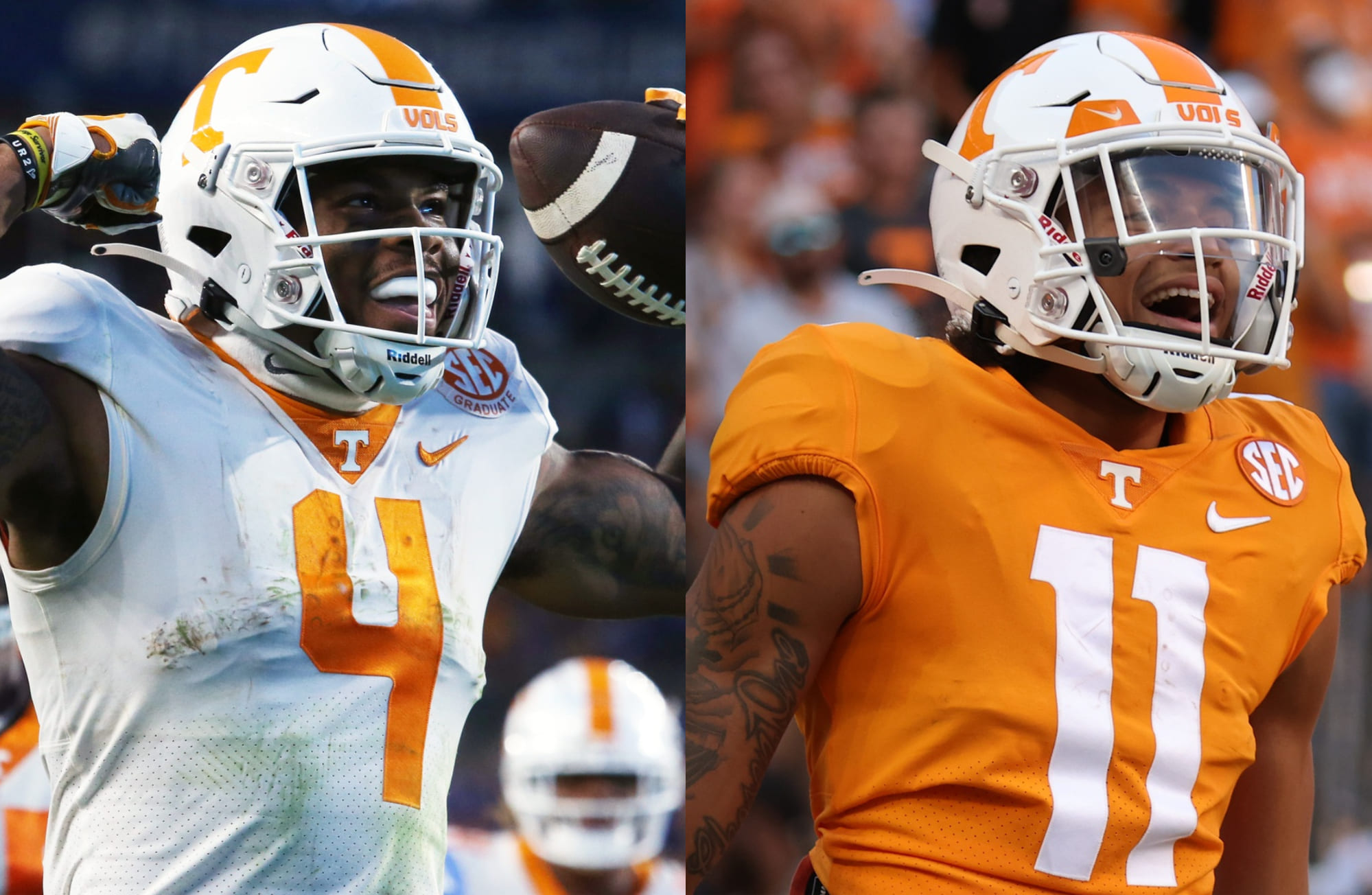 Cedric Tillman vs Jalin Hyatt: Which WR Would You Rather Have?

Two wideouts each gleaming with potential on Sundays, the Tennessee duo of Cedric Tillman and Jalin Hyatt has become one of the nation’s most intimidating perimeter tandems this fall. A pair of athletes unique in how they win on the outside and ways in which teams will project their success on Sundays, choosing one or the other if you’re an NFL general manager has become a topic of conversation. Let’s dive into it.

The Case For Cedric Tillman

Standout pass-catchers in the college game aren’t hard to find, but for Cedric Tillman, his path to stardom has come via a route less traveled as a fifth-year talent for the Volunteers. Following in the footsteps of Marquez Callaway, Velus Jones Jr., and Josh Palmer, the redshirt senior could be the next Volunteer to make waves early at the next level. Playing four years in the SEC is rare, let alone five.

In a conference littered with NFL talent, players are often champing at the bit to declare for the draft following their third year out of high school, but for Tillman, his game has aged like fine wine. After a 2021 season that saw him eclipse the 1,000-yard plateau—the first Volunteer to do so since 2012—Tillman returning to school was expected to form one of the country’s elite quarterback-wide receiver tandems in the country as Hendon Hooker’s top option.

SEC Preview on Journey to the Draft pic.twitter.com/EJQI3GBU6W

A big target at 6-foot-3 with an even larger performance ceiling, while Tillman won’t draw a spotlight that USC’s Jordan Addison, SMU’s Rashee Rice, or TCU’s Quentin Johnston will, he can flat-out get after it on the perimeter. There isn’t much he can’t do as a target hog within head coach Josh Heupel’s offense, as his imposing frame allows him to overpower smaller corners. And when the ball is in the air, it’s a wrap, as his hands and body control allow him to consistently haul in passes downfield—two of his three catches when targeted 20-plus yards downfield have resulted in touchdowns.

In a year that hasn’t gone to plan after suffering a knee injury against Akron, the onus fell on Tillman to produce even larger numbers than last fall. In the weeks in which he has played, he has showcased an athlete capable of producing at the sport’s highest level. The tape is there, the frame and athletic ability are there—heck, playing in the SEC helps as well.

This is about as good as it gets at the college level—and who better to do it against than Alabama? A simple nine-route to the boundary in a 2×2 set, the throw from Hooker is *chefs kiss* to Tillman some 42 yards downfield. Although defensive back DeMarcco Hellams did well to make up the gap created by the Volunteers wideout at the onset of the route, Hooker placed the ball in a spot only his wideout could make a play.

Opening up your inside hip to locate the football while falling back isn’t your run-of-the-mill reception, and Tillman makes it look so darn easy here, snatching the football out of the air. The play, although it fell into the shadows in a 52-24 Volunteers loss to the Crimson Tide last year, was a culmination of both Tillman’s explosive playmaking ability and Hooker’s easy gas under center. Electric pass-catchers at his size don’t come around too often and Tillman’s deep bag of traits should see him become a popular name as we move further into the 2023 NFL Draft cycle.

The Case For Jalin Hyatt

One of the nation’s most productive pass-catchers through 12 weeks of football, Jalin Hyatt has made it a habit seemingly every single week to shred opposing defenses out of the slot. While Heupel’s offensive architecture has thrown a wrench into Hyatt’s projection at the next level, microscoping his profile as an athlete should entice executives across the NFL.

A wiry product at a tick over 180 pounds, he’s reminded some of Will Fuller during his time at Notre due to their get-up-and-go. A fluid route-runner whose long, gliding strides—like Fuller—allow him to eat up ground and manipulate coverage at his discretion, he’s made it look too easy this fall. No wonder Hyatt is a Biletnikoff award semifinalist.

While his 207-yard, five-touchdown performance against the Crimson Tide in Week 7 will go down as one of the most impressive outings for a Volunteer wideout in their program’s history, his video-game-like outings no matter the prestige of the opponent aligned in front of him has forced us at TDN and evaluators across the industry to peel back the layers on who exactly the type of player Hyatt could be for an NFL offense.

Is he scheme-specific? Is he a one-trick pony? Can he get off the line of scrimmage on the outside if asked to slide to the ‘X’ spot within a passing attack? Those are all questions that remain as we approach Thanksgiving, but one thing is for sure in that he checks a ton of the boxes you look for in an oily receiver with the ability to put points on the board in an instant.

Give me Cedric Tillman. Yes, the home run ability of Jalin Hyatt will garner a ton of attention as we move forward into the thick of the pre-draft process, but I also want singles and doubles, and Tillman, right now, is the cleaner prospect and a guy that takes it personally when corners are able to bat passes away. He’s the most translatable for me right now, and with Hooker out for the year with a torn ACL, I expect the fifth-year senior in Tillman to lead the way once again through the air this week after amassing 18 targets against South Carolina.