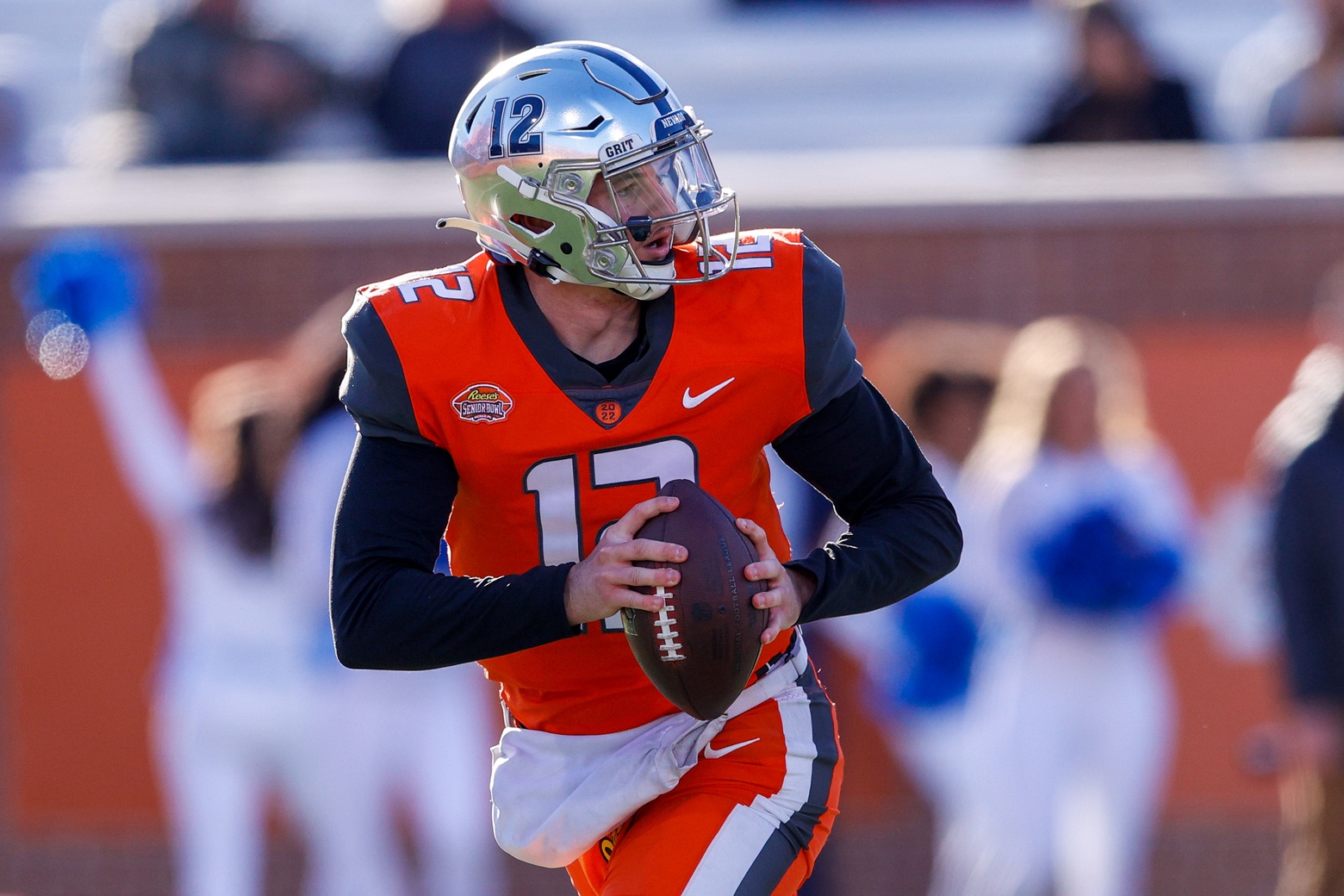 Day 1 of Senior Bowl practices kicked off in Mobile, Alabama on Tuesday. It also marked the first day of an extended battle for QB1 in a quarterback class that’s as wide-open as we’ve seen in recent years. While some quarterbacks (like Desmond Ridder) had a surprisingly poor day that they’ll surely be looking to bounce back from with a long week ahead, others continued to prove us right in everything we thought they could be. One of those passers was Nevada’s Carson Strong, who was one of the most consistent passers in the nation in 2021. That shined through as the week kicked off, with Strong only having two poor throws on the day—one was a near-interception into double coverage while the other was a low throw during routes on air that his receiver still managed to pull in. Outside of this, though, Strong—though in somewhat close contention with Pitt quarterback Kenny Pickett—was the most mistake-free signal-caller to take the field. When the National Team took the field, from the play-fake footwork drill to the end of the team period, Strong was clearly the best deep passer—both in the context of arm strength and accuracy—and showed the highest level of confidence and an unrivaled command over the offense that helped give him the edge. When it comes to “it” factor, one of the things we’ve talked about most this season is his deep ball down the sideline, something that was also unsurprisingly on display. https://twitter.com/TheDraftNetwork/status/1488629546240905217 Strong had a touchdown pass down to the corner of the end zone and almost had another one to the right corner of the end zone, but former teammate Romeo Doubs appeared to lose the ball, so it fell incomplete. The few incompletions Strong did have on the day were typically the fault of the receiver, whether they slowed down on the route, dropped the ball, or made another error. While Strong continued to check all of the boxes as a passer and continued to establish himself as the best in that aspect in this draft class, Strong also had moments when he evaded pressure well and he showed a more than competent ability to navigate the pocket and showed enough mobility within it. These are the things that are less talked about since Strong is classified as a pure pocket passer, something that carries an incorrect stigma that the quarterback is a statue and can be falsely viewed as negative with the mobile, running quarterback trend currently going on in the NFL. https://twitter.com/TheRealForno/status/1488591669654179846 And speaking of “negative,” one of the concerns surrounding Strong this season was a potential knee issue that could affect him badly looking at the long-term future. But those rumors have since become rather quiet, as Strong has been cleared by a Los Angeles Rams team doctor and his lower-body mechanics on Tuesday didn’t give any reason for concern, much less look like those of a quarterback hampered by an injury issue. If Strong—who completed 70% of his passes for 4,186 yards with 36 touchdowns and eight interceptions this season—can maintain this level of play throughout the remainder of the Senior Bowl, expect him to see him appear as QB1 across multiple draft boards at the end of the showcase.