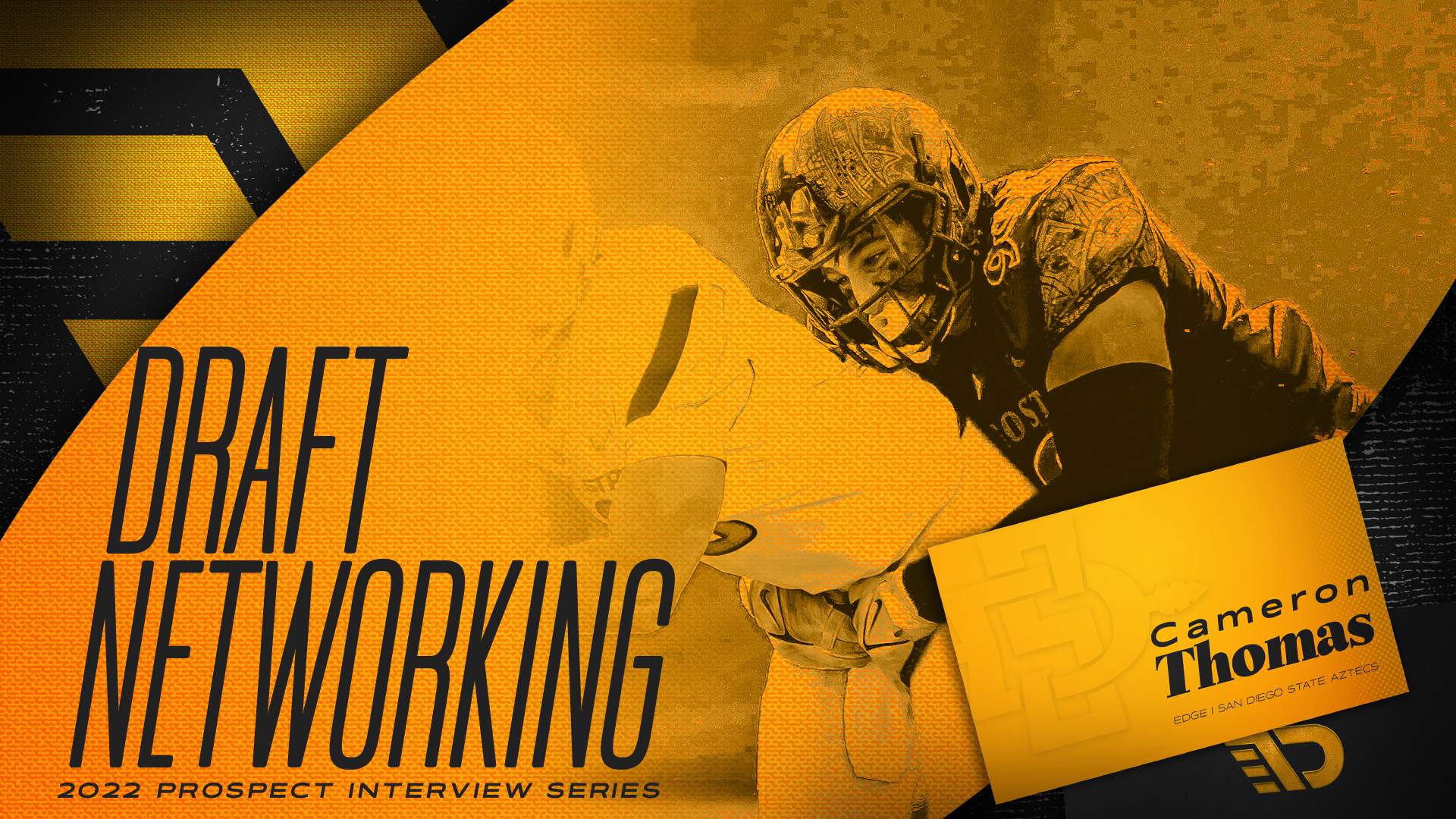 San Diego State’s Cameron Thomas is one of the most versatile and intriguing defensive line prospects in the 2022 NFL Draft. Thomas lined up all over the Aztecs’ defensive formation while serving as a game-wrecker in different alignments.

Thomas’ relentless motor pairs nicely with his diverse skill set and allows him to rush the passer from both the EDGE and interior positions. Thomas is an advanced pass rusher with excellent hands. Thomas exploded for a career-high 10.5 sacks in 2021 and is viewed by NFL teams as an ascending talent.

Thomas recently spoke exclusively with The Draft Network regarding his excellent 2021 campaign, his diverse pass rush arsenal, how playing in San Diego State’s defense helped prepare him for the next level, overcoming the “small school” stereotype, and so much more.

JM: You showed some exciting flashes prior to 2021, but you exploded for a career-high 10.5 sacks this past season. What allowed you to take that desired step forward?

CT: I would really credit the room I created for preparation. Preparation makes up a large part of my game and approach. That’s always been true about me, and it didn’t change heading into this past season. I continued to be myself and trusted the process. I also made a transition from defensive tackle to defensive end. If I had to point out anything specifically that changed, switching to defensive end certainly played a role. Like I said earlier, staying consistent within my preparation also made a difference.

JM: Tell me more about that switch to defensive end and what that transition was like. It obviously paid off.

CT: I’ll start from the beginning. I ended up redshirting during my freshman year and I was intended to play defensive end. Coach Brady Hoke stepped in during the spring of that redshirt freshman year back in 2019. I had multiple defensive line coaches throughout my time at San Diego State.

I remember at the end of that spring camp, coach Hoke began meeting with myself and everybody else on the defensive line. He sat there and told me the honest truth that he already had two starting defensive ends that were senior, more experienced players than I was at the time. They had more experience under their belt. I decided to ask coach Hoke about playing on the interior. They threw me in at nose tackle and I played my entire redshirt freshman year at nose tackle.

Going into the 2020 season, which was my sophomore year, I asked to play defensive end but the program decided not to fix what wasn’t broken. They were happy with my results at nose tackle and decided to keep me there throughout the majority of that season. We had to shuffle some things around late in the season due to an injury, and I ended up playing some defensive end towards the end of the year. Fast forward to 2021 and I got to play defensive end on a more permanent basis. I still had some snaps at nose tackle due to matchup-related stuff, but I spent the majority of my time at defensive end.

JM: We appreciate you sharing that with us. And where do NFL teams see you playing at the next level?

CT: They see me as a defensive end. I’m a natural EDGE rusher at the end of the day. I get after the quarterback. I played defensive tackle at San Diego State because that’s what I needed to do in order to help the team. Going into the next level, I’m definitely an EDGE rusher.

JM: I want to talk about your pass rush arsenal because it excites me on tape. What do you consider to be your go-to moves and top counters?

CT: I really learned more and noticed some things as a pass rusher this past season that allowed me to take steps forward, especially while studying NFL film. I better understand how to set up rushes now. That’s something I started doing this past season and I believe it helped me out a ton.

Let’s say I start the game with a simple bull rush. I hit the offensive tackle with two bull rushes at the beginning of the game. They start thinking that’s the natural angle I prefer to take, they now peg me as a bull rusher. Most offensive tackles will start sitting on the bull rush. Once they do that, they shorten up the edge. That’s where I can start working and winning the edge with some speed. If I’m playing inside as a three-technique, I can hit him outside twice and now he’s thinking I’m an outside guy. The tackle starts setting his momentum outwards and that’s when I can counter inside.

I love to do the same thing on the edge. Once I have them sitting, I like to fake a bull rush and slip inside really quick. There’s a lot that goes into it. That’s just one or two examples. If I were to narrow myself down to a certain pass rush move, I’m a big fan of the double-swipe. That’s more of a setup than my favorite move, however.

JM: You obviously put a lot of thought into your arsenal and pre-game approach. I appreciate you sharing that in-depth with us. Your hands are extremely active, technical, and advanced. How did you develop that?

CT: That’s all about me putting in the work every single day. I really try to consistently work my hands. I still believe I can get a lot better in that area. They’re not even close to being good enough. I’m always chasing improvement, and I plan on bettering myself in that area at the next level. I’ve definitely put a lot of work into using my hands,

JM: It shows on tape. Have you had any virtual or Top 30 visits, and do you have any more of those coming up?

CT: The experience and the process have been kind to me. I’ve really enjoyed getting on the road and meeting these NFL teams. I’m continuing to wrap up this draft process in the best way imaginable. It’s been really awesome.

JM: A hamstring injury unfortunately kept you from physically participating at the NFL Scouting Combine. What’s the current status of that injury?

CT: I’d like to thank San Diego State for being kind enough to host my own personal Pro Day. I was able to get in front of those NFL decision-makers and work out for them on the field. I’ve obviously been dealing with that injury throughout this process. I’m continuing to get healthy. Things are looking perfect right now. I plan on being out there for my first rookie mini-camp.

JM: That brings me to my next question. You did recently work out for NFL scouts and you posted some eye-popping numbers, including a 6.91 in the three-cone. Where does that agility come from, and do you think you surprised those in attendance?

CT: I wasn’t personally surprised at all. I had a great feel for what numbers I was capable of putting up and achieving. I was excited to finally receive an opportunity to show everybody what I’m all about. Before the combine, I had to sit out the Senior Bowl as well. That was really frustrating for me. And then the combine occurred. I finally got my chance to go out there and showcase what I’m all about at the individual Pro Day. It really meant a lot to me.

JM: You looked terrific all throughout that workout. You dominated the competition, but some people will still refer to you as a “small school” prospect. How do you typically respond?

CT: First off, I honestly think the Mountain West is a fantastic division. I was lucky enough to play my football within that conference. I’m very proud that I attended San Diego State. I wish I was able to showcase myself at the Senior Bowl against players and competition from different schools, but unfortunately, that wasn’t the case.

Obviously, some people are going to say that about the Mountain West, but I honestly don’t believe there’s any difference or dropoff whatsoever between our conference and some of the others. Not at all, not one bit. It’s an awesome division that continues to prove itself every year when they get an opportunity to play against Power-5 competition.

JM: I think that’s a fair point. A lot of talent is coming out of the Mountain West. I’ve seen some people compare you and your playing style to J.J. Watt. That’s obviously a lofty comparison. What goes through your mind when you hear that?

CT: Getting compared to somebody like J.J. Watt is obviously a huge honor. I always try to be my own person and player at the end of the day. I have a tremendous amount of respect for J.J. Watt and every single great NFL defender, but I have to carve my own lane. Watt has been so incredibly successful in this league for a reason.

I’m trying to be my own person as we approach the 2022 NFL Draft. I’m excited about the inside-outside versatility I’ve flashed throughout the course of my time at San Diego State. I have a tough time comparing myself to other players, but it’s really cool to hear people comparing me to Watt.

JM: It’s certainly an honor. I’ve really appreciated your time today. What kind of impact is Cameron Thomas going to make at the next level?

CT: Whichever team decides to draft me is going to get a kid that absolutely loves football. I have bad intentions on every single snap. My motor and effort levels never stop revving. I’m going to come in ready to work every single day.