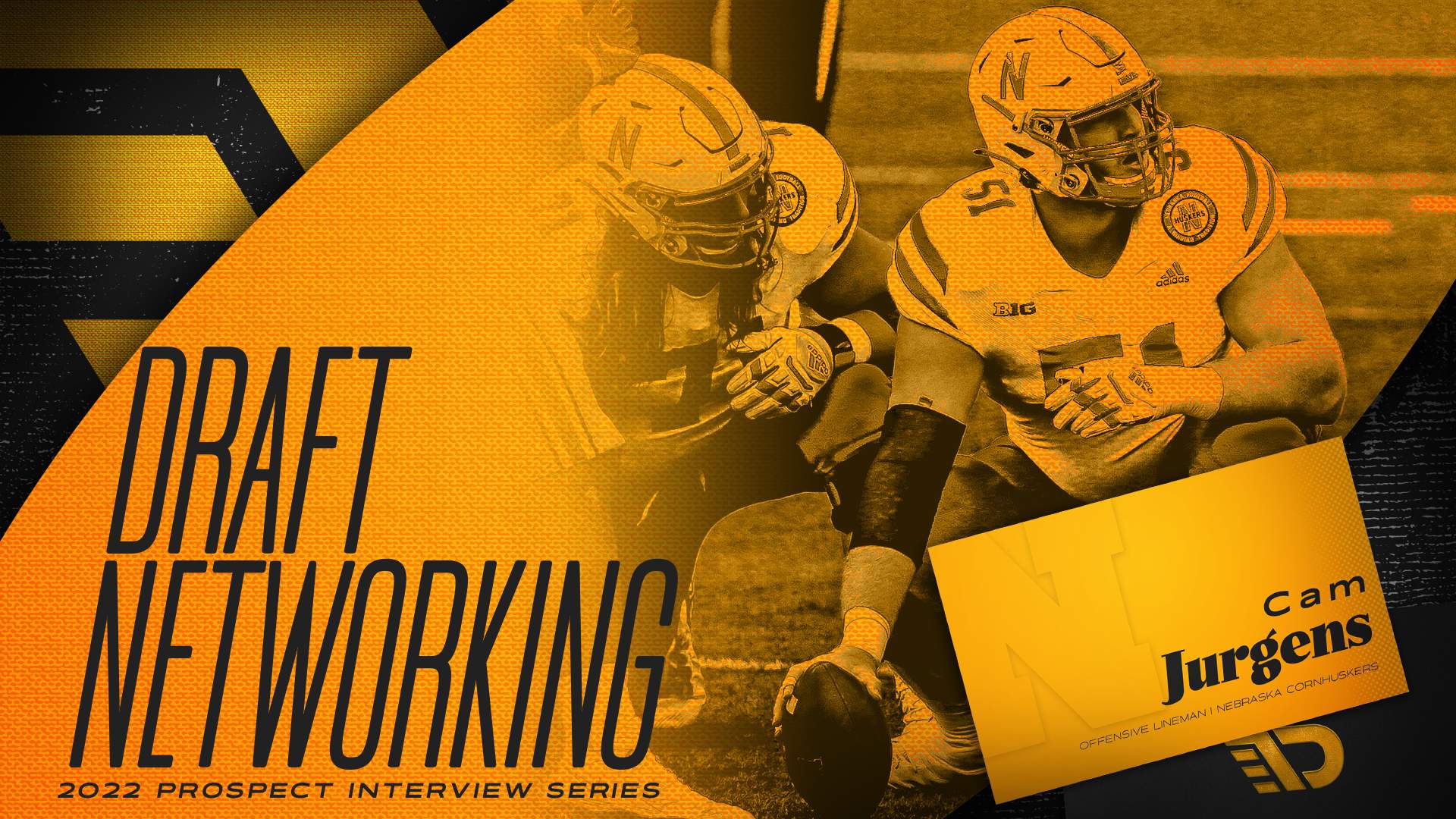 Nebraska’s Cam Jurgens is one of the more athletic and dynamic center prospects available in the 2022 NFL Draft. Jurgens blew up the NFL Scouting Combine by running the 40-yard dash in a blazing 4.92 seconds while tipping the scales at more than 300 pounds. Jurgens’ performance captured the attention of all 32 teams.

Jurgens recently spoke exclusively with The Draft Network regarding his combine experience and performance, what it meant to represent his hometown Nebraska Cornhuskers, and oh, we also discussed his personal line of beef jerky, “Beef Jurgy.”

JM: As a Beatrice, Nebraska native, what did it mean for you to represent and attend your hometown Nebraska Cornhuskers?

CJ: Growing up locally, attending Nebraska is the pinnacle. It’s the highest honor you can receive. That’s pretty much all we have in Nebraska (laughs). We have football.

If you grew up in-state, you have that Husker Red running through your veins. Every kid there, every parent, the dream is to witness their kids play for Nebraska. I got to live out that dream and it was so incredible for me. It gave me an opportunity to serve as a role model for the kids that grow up in Nebraska. It was so awesome.

JM: We couldn’t be happier for you. You’ve been training and preparing throughout the pre-draft process with the excellent team at Sanford Power. How are they getting you ready for what’s next?

CJ: We’ve done a lot of training for specific drills. My agency, Rep 1 Sports, has been awesome throughout this process. They helped bring in some offensive line coaches to help us throughout the preparation process. We had coach Paul Alexander and Joe Staley come in.

Being able to work with those guys and the entire team at Sanford Power has been amazing. They’re helping me become the best athlete I can be. I’ve been working with coach Alexander and Staley on things that extend far beyond drills. We’re working on techniques and actual football stuff. It’s been a really fun process for me.

JM: Your training clearly paid dividends. You had an excellent combine. You weighed in at more than 300 pounds and ran the 40-yard dash in 4.92 seconds, which was one of the fastest times among all performing offensive linemen. You also put up 25 reps on the bench press. What was your overall experience like in Indianapolis?

CJ: The combine is a busy event. People watch it on TV and see all of the on-field workouts and everything like that, but you don’t see the interviews, medical checks, and everything else that goes on behind the scenes. You have to be on point and ready 24/7.

It was a great experience. It was awesome to get that exposure with the teams. Prior to the combine, they’re only familiar with us prospects through what they’ve seen on film. To be in that meeting with them, to speak with their offensive line coach, and to shake the hands of the general manager and head coach, that’s an experience you can’t put a price tag on. It’s a huge part of the process.

They’ve seen me on film and now they’ve met me in person and have a better understanding of Cam Jurgens the human being. That one-to-one communication was awesome. I feel like that helped me a lot.

JM: It’s such an important event. Do you feel like you improved your draft stock with your performance?

CJ: I definitely did. There’s no doubt about that. When people see me in person and how I move on the field, it has a different impact. You see it on film and think, ‘OK, this guy is an athletic player,’ but when you see it in person, it only further amplifies my athletic abilities.

JM: We saw that with the 40 time and some of your other big-time results. Which teams did you meet with formally throughout the course of the week, and how do you feel those meetings went?

CJ: I met with roughly 13 teams formally. I met with a bunch of teams informally as well. I probably spoke with every team in one capacity or another.

A lot of teams sat me down and threw on the film of Nebraska’s offense. We were talking through some plays in their offenses as well and they asked me to re-teach the play and prove that we can retain information. We went through a bonding process. I went in there and I was authentic. I was myself. I was letting teams know what I’m all about. They were very in-depth meetings and I’m thrilled with how they went.

I met with the New York Jets, Green Bay Packers, Arizona Cardinals, New England Patriots, Tennessee Titans, Buffalo Bills, New York Giants, Philadelphia Eagles, Miami Dolphins, Pittsburgh Steelers, Houston Texans, San Francisco 49ers, and Cincinnati Bengals to name a few. It was so much fun to meet with so many teams and get face-to-face with so many coaches and general managers.

JM: There’s a lot of interest in you and it’s easy to see why. What’s your favorite aspect of playing the center position?

CJ: I love how physical it is. It allows me to go hit someone every play. I love the contact aspect of football. I can go out there in the run game and throw some blocks at the second level. I’m a great athlete for the position. I love to explode out of my stance and get after it.

JM: It pops on tape. How did playing in Nebraska’s offense help prepare you for the next level?

When I get to the next level, I’ll already have some familiarity with whatever system I land in. Whatever we run, I’ve seen it before. It’s going to help me be a quick learner. Whatever it may be, we did something similar at Nebraska. We ran a very diverse system. We ran a lot of power, a lot of wide spread stuff. We really did a little bit of everything. It’s going to help me a ton at the next level, and it was fun to get a feel for what NFL teams do and run at the combine.

JM: Studying your tape is such a fun process. This might be my favorite story of this draft cycle. You created your own line of beef jerky called “Beef Jurgy.” You actually sold out of the product during the combine. You have to tell me about this!

CJ: I started with NIL at Nebraska. We had a logo and everything. Everybody started calling them Beef Jurgy (laughs). We made a logo with that in mind. I grew up on a cattle farm so it’s second nature to me. It was fun to be able to incorporate NIL into my everyday life. One of my teammates Matt Sichterman is a computer engineer. He helped build a website for me. We partnered up with UHLS Sporting Goods in my hometown of Beatrice and began selling merchandise.

I had a bunch of meat lockers reach out to me and I ended up partnering with a local locker and meat butcher and we started making my own brand of beef jerky.

It’s been so much fun because when I was a little kid, one of my first memories was going out hunting with my dad. We used to go deer hunting. We’d hang it up at the end of the year and we always made deer jerky together. Going through that process as a little kid helped teach me how to actually make jerky. To now have my own brand of jerky is the coolest thing ever to me.

I love it. It’s tied into who I am as a person. It represents Cam Jurgens and Nebraska. It’s been such a cool experience.

JM: That’s absolutely amazing. I’ve really appreciated your time today. This conversation has highlighted why you’re one of the top center prospects. In closing, what kind of impact is Cam Jurgens going to make at the next level?