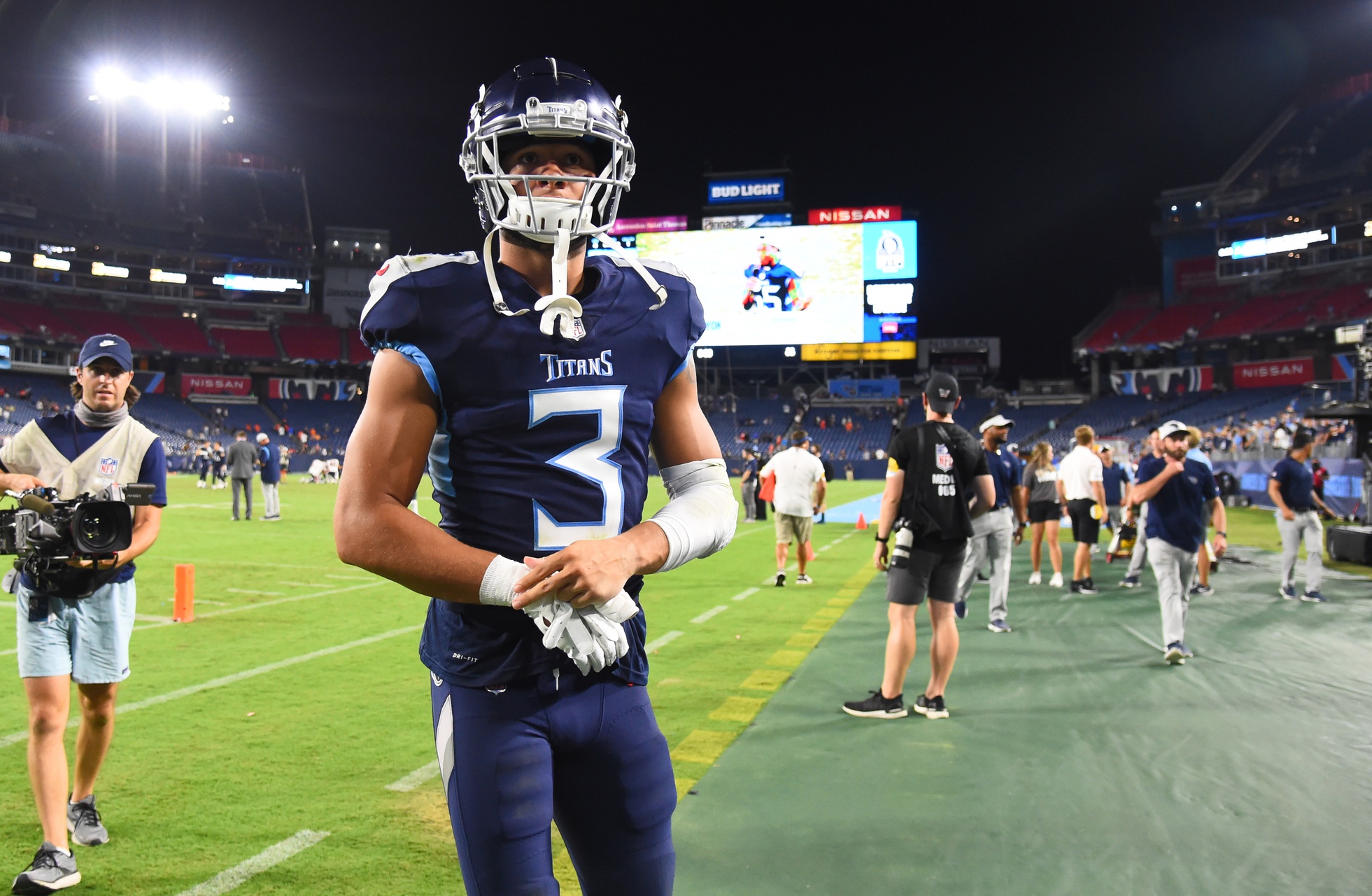 Is Breakout Season On The Way For Caleb Farley?

Tennessee Titans sophomore cornerback Caleb Farley appears set to experience a breakout season in 2022. Farley essentially experienced a lost rookie campaign last year. Titans General Manager Jon Robinson drafted Farley with the No. 22 overall selection in the 2021 NFL Draft despite some injury concerns being attached to his pre-draft stock. The former Virginia Tech standout had two back surgeries in college that threatened to limit his first-year availability. Farley ended up appearing in three contests as a rookie but unfortunately suffered a torn ACL in a thrilling mid-October primetime victory over the Buffalo Bills.

Farley now returns to the Titans in 2022 and will receive an opportunity to become a starter opposite Kristian Fulton for the first time in his short career. The Titans released veteran cornerback Janoris “Jackrabbit” Jenkins earlier this offseason. Jenkins was a cap casualty that gave the Titans quality snaps on the boundary last season. Jenkins’ release opened a clear path for Farley to become the player the Titans envisioned he’d become when they used a premium draft selection on him.

One who has paid close attention can argue this was always the plan for Farley. The aging Jenkins signed a two-year contract last offseason that was structured in a manner that always allowed the Titans to treat him as a one-year bridge option while Farley continued to rehab and acclimate to the professional ranks. That time has come.

The Titans have been thoroughly impressed with Farley’s progress this offseason. Head coach Mike Vrabel praised Farley throughout the first week of organized team activities (OTAs), calling the second-year defender “lightyears ahead” of where he was last season mentally. Vrabel rarely showers young players with praise publicly unless they truly deserve it, so it’s fair to take the reigning Head Coach of the Year at his word. Farley chimed in more recently, claiming he’s “stronger mentally than I’ve ever been.” Getting mentally prepared has been a constant theme for Farley.

As a prospect in the 2021 draft, Farley routinely scored exciting evaluations from a traits perspective. If not for the injuries, there’s an excellent chance Farley would have been a top-10 selection. Farley possesses elite measurements for the position at 6-foot-1 and 207 pounds. Farley has excellent size for a cover-man. The athletic traits are through the roof as well. A back procedure prevented Farley from running the 40-yard dash at the NFL Scouting Combine, but he had previously been timed in at a staggering 4.28 seconds.

On tape, Farley was a loose and fluid prospect in coverage. Terrific length (33 ⅜” arms, 96th percentile for cornerbacks) allowed Farley to disrupt the catch point with outstanding ball skills at Virginia Tech. Overall, Farley has the size, foot quickness, length, and straight-line speed to develop into a high-level cover-man in Tennessee.

Whether or not Farley reaches that potential is mostly contingent on his ability to stay healthy. The Titans possess several backup plans in case availability continues to be an issue for Farley. They somewhat surprisingly drafted another cornerback with a premium selection in the 2022 NFL Draft. Robinson ignored needs at receiver and across the offensive line (both of which were addressed later) to select former Auburn cornerback Roger McCreary with the 35th overall pick in April’s draft. McCreary is capable of playing both outside and at the nickel. The Titans also feature terrific veteran depth at the position. Both Buster Skrine and Chris Jackson have performed admirably when thrust into starring roles. Elijah Molden isn’t a candidate to start outside, but the former Washington standout has already made the nickel position his own. Tennessee’s cornerback room is filled with young, promising players (some of which have already proved their worth) and Farley could elevate this position group to the next level.

The Titans fielded an excellent defense in 2022. Robinson spent the offseason revamping a defense that was well below average in 2021. Sweeping personnel changes welcomed the much-desired improvement.

The Titans’ defense ranked inside the top-10 of multiple regular-season categories, including rushing yards allowed per contest (84.6/game, second place), points allowed per game (20.8/game, sixth place), and sacks (43 quarterback takedowns, tied for ninth place). Continued success is expected in 2022 with 10 of 11 starters returning from last season. That sole new starter is expected to be Farley, who is currently being prepared to seize his opportunity.