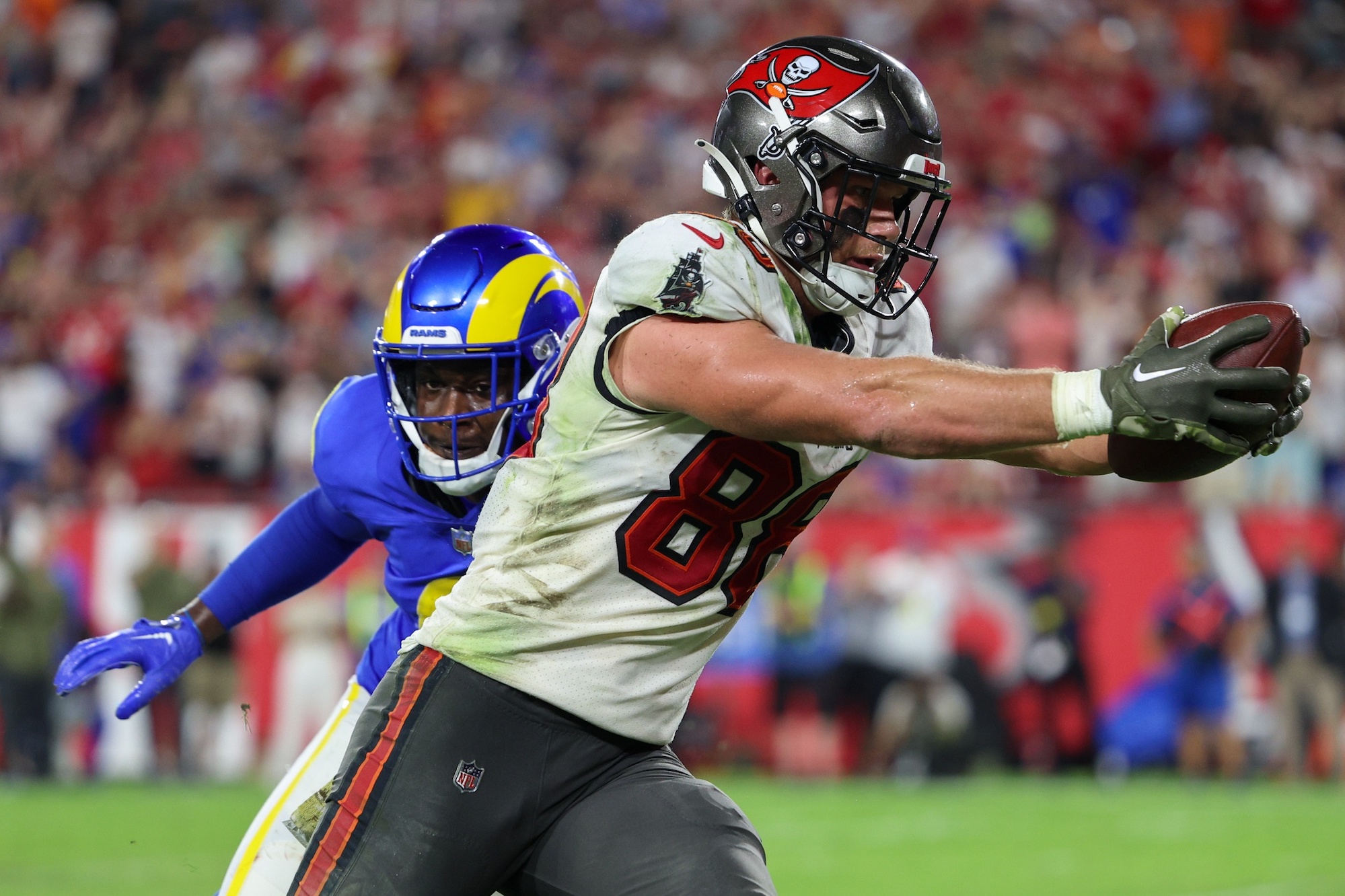 Cade Otton Is More Than Just An Injury Fill-In

Rookie tight end Cade Otton’s game-winning touchdown reception against the Los Angeles Rams on Sunday may have saved the Tampa Bay Buccaneers’ season. Tampa Bay risked falling to 3-6 with a loss, and instead sit atop the NFC South at 4-5. However, the symbolic nature of Otton’s performance may wind up being the most important part of his performance on Sunday, outside of the whole “saving the season” thing. Otton’s coming out party symbolized a few things: a changing of the guard at one of the most important positions in Tampa Bay’s offense, and a growing trust with a notoriously prickly 45-year-old quarterback.

When Tom Brady arrived in Tampa Bay in 2020, arguably no position on the roster boasted more talent than tight end. After luring Rob Gronkowski out of retirement, Tampa Bay, a base-one tight end offense, went three deep in quality starters at the position. Gronkowski, O.J. Howard, and Cameron Brate formed the strongest tight end room in the league. Slowly but surely, that depth has deteriorated. Gronkowski retired after 2021. Howard tore his Achilles tendon in 2020, returned a shell of himself in 2021, and departed as a free agent after the season. Brate, the lone holdover from 2020, was 29 years old when Brady arrived in Tampa and he has aged into a different phase of his career and struggled with injuries this season. This has necessitated the emergence of new talent at the position, a crucial one for Brady throughout the course of his career, this season. Enter Otton.

23-and-a-half years into Brady’s career, Otton is proving to be one of the few exceptions to the seemingly endless list of rookie skill position players who struggle to find their footing in a Brady offense. And with the depletion of depth at the tight end position in Tampa Bay, the Buccaneers need it now more than ever.

The Buccaneers selected Otton with the first pick of the fourth round in the 2022 NFL Draft. Initially, they expected him to fill a role like that of Howard’s last year: a third tight end behind Gronkowski and Brate. However, with Gronkowski’s somewhat unexpected retirement and Brate’s bad injury luck, Otton has been thrust into the No. 1 tight end role for Tampa Bay.

While there have been bumps along the way, Otton has flashed upside to be a long-term starter at the position for the Buccaneers. Through nine games, Otton is on pace for 46 catches, 465 yards, and 2 touchdowns. The numbers don’t pop off the screen at first glance, but they come with the caveat that Otton was not a full-time player for much of the early part of the season.

When given the opportunity to play a full-time role due to Brate’s numerous injuries, Otton has put up impressive performances against the Rams (five catches, 68 yards, 1 touchdown), Carolina Panthers (four catches, 64 yards), and Atlanta Falcons (six catches, 43 yards). These numbers represent three of Tampa Bay’s four highest outputs in terms of receiving yards from a tight end this season. This, coupled with the fact that Otton offers more as a blocker than Brate, presents a strong case for him to take command of Tampa’s top tight end job even once Brate returns.

What Otton has done should also be considered even more impressive given the difficulties rookie skill players have faced entering Brady’s esteemed Circle of Trust. Otton’s current pace of 465 yards would rank sixth among all rookies Brady has played with, behind Aaron Hernandez (2010 season, 563 yards), Gronkowski (2010, 546), Aaron Dobson (2013, 519), Deion Branch (2002, 489), and Kenbrell Thompkins (2013, 466). He would even slot ahead of Super Bowl LI hero Malcolm Mitchell, a player whose overall numbers may not have been as gaudy as players such as Dobson or Thompkins, but, unlike those players (who played as a matter of circumstance, frustrated Brady to no end, and washed out of the NFL within a couple of years), firmly entrenched himself in Brady’s Circle. What Otton has done over the past few weeks, gaining Brady’s trust in an offense that features established stars in Mike Evans and Chris Godwin, should be lauded.

Otton has quickly become one of the main complementary parts of the Buccaneers’ offense, and Tampa Bay needs it. Their two big offseason acquisitions to complement Evans and Godwin, Russell Gage and Julio Jones, have struggled to stay healthy. Jones, in particular, seems like a sunk cost at this point. His recent injury history suggests he is a poor bet to stay on the field for a sustained period at this point in his career. Gage has dealt with a hamstring injury since training camp. The Buccaneers will have to hope he will come out of the bye week healthy. Tampa Bay has well-documented issues with their running game too. Their running backs are capable pass-catchers, but not necessarily mismatch threats in the passing game.

This all goes to show one thing: with no running game and little in the way of secondary receiving options, much of the offensive burden has fallen on Evans and Godwin at this point in the season. Otton’s emergence not only fills a hole at the tight end position, but it could give the team the complement it has needed for its two best skill position players all season. Not bad for a rookie in a Tom Brady offense.