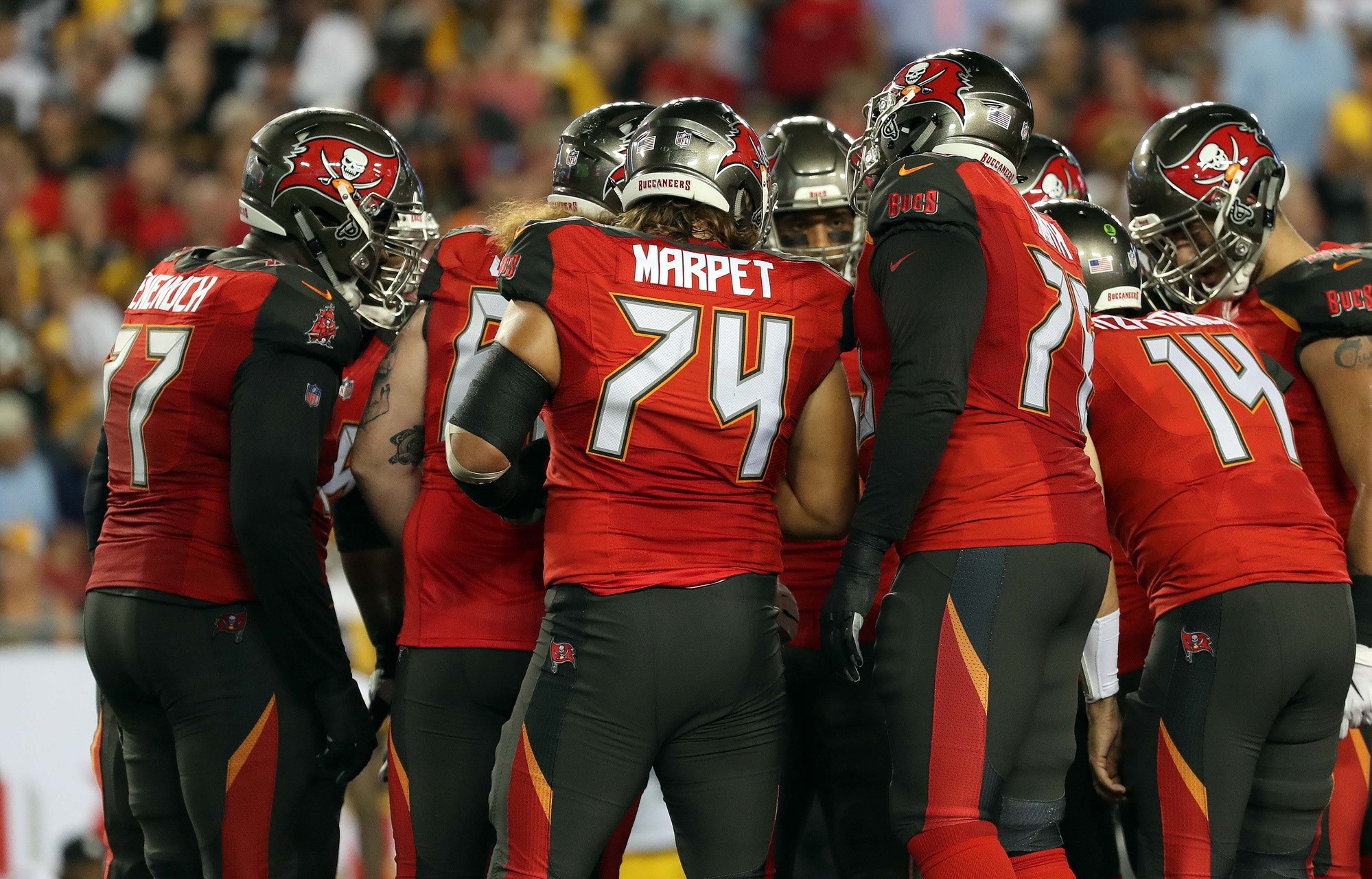 The retirement of a Pro Bowl guard certainly ‘threw a wrench into things,’ but maybe not as much as you’d think. Pro Bowl left guard Ali Marpet made the shocking announcement this week that after seven seasons with the Buccaneers, he was retiring from the game of football. Marpet, a small school product coming out of Division-III Hobart, was a seven-year starter and one of the top guards in the league during that time, even if it took until this past season to get the recognition for it. A Super Bowl championship, a Pro Bowl jersey, and Marpet is ready to move on to life after football. Who could blame him?  Not many get to go out on their terms, especially after accomplishing everything they wanted to accomplish, in relatively good health. Marpet is now free to watch all the San Diego sunsets he wants (a nod to his most recent Instagram post) and maybe even strum the ukulele seaside, should he so desire. But it isn’t all sunshine and rainbows for the Buccaneers, who now have all three of their interior linemen in flux going into 2022. Both center Ryan Jensen and right guard Alex Cappa are impending free agents. Swing guard Aaron Stinnie, who has filled in multiple times at various positions throughout the last couple seasons, makes a trio. And with no scarcity of need for offensive linemen across the league and an increased appreciation for the unit (you love to see it), those players won’t come cheap if the Buccaneers want to re-sign them.  “We can't replace the player,” said head coach Bruce Arians of the now-island boy Marpet. “But if we can get back, Ryan and Alex, [Aaron] Stinnie, they all played together. Nick Leverett played. We went through seven or eight offensive linemen last year. Those five guys were Iron Men for most of the year till January. But yeah, I think we're fine there.” Like the Drake lyric goes: “It could all be so simple.” Say you do re-sign Jensen and Cappa. Perhaps you get Stinnie on a team-friendly deal to fit them all under the cap. Can you plug and play Stinnie for Marpet just like that? For a unit that thrives on continuity, that could actually end up being the case. Not only has Stinnie filled in at multiple positions, he’s done it at crucial times. He came in for Cappa in the 2020 divisional round and helped the Buccaneers to the mountaintop without hardly skipping a beat. “I think our offensive line was a major key to our success winning the Super Bowl and having a really good record this year,” said general manager Jason Licht. “So we want to continue to build that offensive line or retain the players that we have on that offensive line to continue that position group being strong and we'll just have to see how it goes. Sometimes what you want to do and what happens are two different things, but we definitely ideally would like to keep it moving forward.” Of course, Stinnie may not be the real question here. The ‘center’ of it all could indeed be Jensen, who has grown into a leader on the line.  “He's been the center pivot of our offense,” said Licht. “We signed him when we did to elevate the and set the tone of the toughness of the team, and he's definitely done that. So, I think for me, it's a definite priority. We want to continue that.”