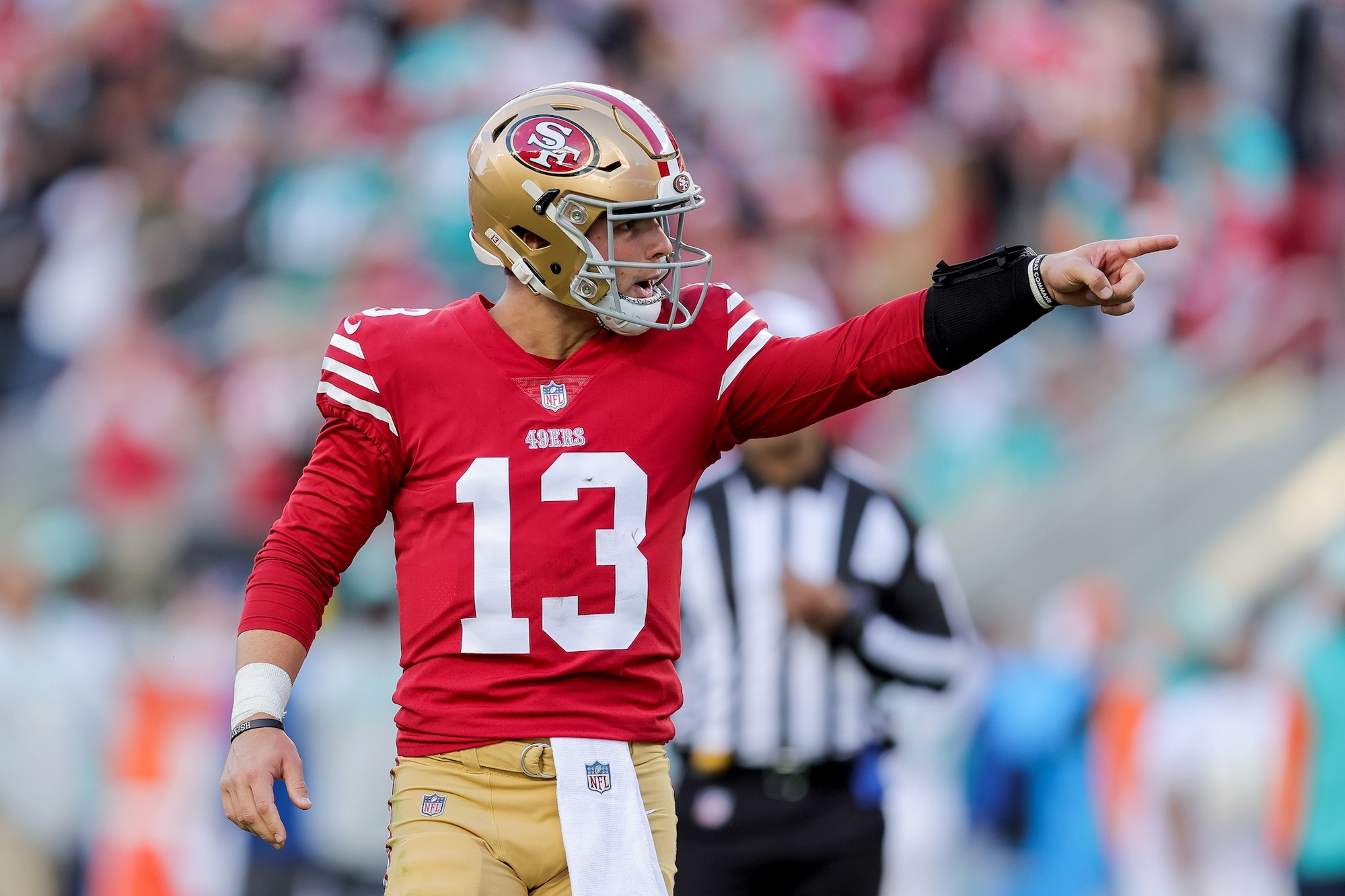 San Francisco 49ers rookie quarterback Brock Purdy entered Sunday’s win over the Miami Dolphins following an injury to starting signal-caller Jimmy Garoppolo. It has since been confirmed that Garoppolo suffered a season-ending broken foot. Purdy appears poised to serve as San Francisco’s starting quarterback moving forward and his performance against the Dolphins showcased reason for optimism.

The No. 262 overall, and final, selection in the 2022 NFL Draft, Purdy helped San Francisco to a convincing 33-17 victory over a legitimate postseason contender. Purdy was beyond serviceable, finishing 25-of-37 (67.5%) for 210 passing yards, two touchdowns, and one interception.

Purdy threw his first career touchdown in the first quarter to give San Francisco a 10-3 lead. A play-action fake to Christian McCaffrey allowed Purdy to hit a wide-open Kyle Juszczyk, who came uncovered while leaking out of the backfield. Purdy became the first Mr. Irrelevant in NFL history to throw a touchdown.

Purdy’s second touchdown pass occurred just seconds before halftime, breaking a 10-10 deadlock and giving his 49ers the lead going into the break. He showed terrific poise while making a quick decision to hit McCaffrey in the end zone. The Dolphins routinely applied pressure on Purdy throughout the contest. He was completely unbothered.

CMC gives the @49ers the lead before the half!

Speaking of pressure, Purdy faced 13 blitzes from the Dolphins, many of which were of the “Cover Zero” variety, per ESPN Stats & Info. Dolphins defensive coordinator Josh Boyer was clearly trying to rattle the cage of an inexperienced signal-caller. Purdy ultimately went 8-of-12 for 54 yards and was sacked once throughout Miami’s 13 blitzes. Purdy rose to the challenge in admirable fashion.

Purdy’s most impressive throw of the contest occurred under one of those aforementioned pressures. Purdy recognized the blitz pre-snap, called an audible, and released the football in 1.72 seconds, which was the sixth-fastest throw any quarterback has made this season, per Niners Nation. Purdy stood tough in the pocket and hit tight end George Kittle up the seam. Purdy is a quick processor and he was unphased by Miami’s exotic blitz packages.

Purdy will receive an opportunity to build on Sunday’s performance. He began the season as San Francisco’s third quarterback, but both Trey Lance and Garoppolo are out for the season. The 49ers are thin at the position as a result of two season-ending injuries. General manager John Lynch signed veteran quarterback Josh Johnson to his 53-man roster off the Denver Broncos’ practice squad on Sunday evening. A 13-year veteran, Johnson is expected to back up Purdy moving forward. Former fourth-round selection Jacob Eason is on San Francisco’s practice squad but has never appeared capable of spearheading an NFL offense. Purdy is San Francisco’s best remaining quarterback.

Purdy has inherited a supporting cast that will attempt to alleviate the pressure off of his shoulders. Throwing to what’s arguably the best group of pass catchers across the league certainly helps. The likes of Deebo Samuel, Kittle, and Brandon Aiyuk will help Purdy make quick, accurate decisions such as the ones seen via his two touchdown tosses. McCaffrey and Juszczyk are legitimate dual-threat weapons. Head coach Kyle Shahanan operates a quarterback-friendly system that won’t overcomplicate matters for Purdy.

Garoppolo’s injury represents an unfortunate setback for a 49ers squad that believes they can win Super Bowl LVII. Their aspirations now rest on the arm of a day-three rookie quarterback. If Sunday was any indication, Purdy will keep the 49ers competitive in January and possibly beyond.