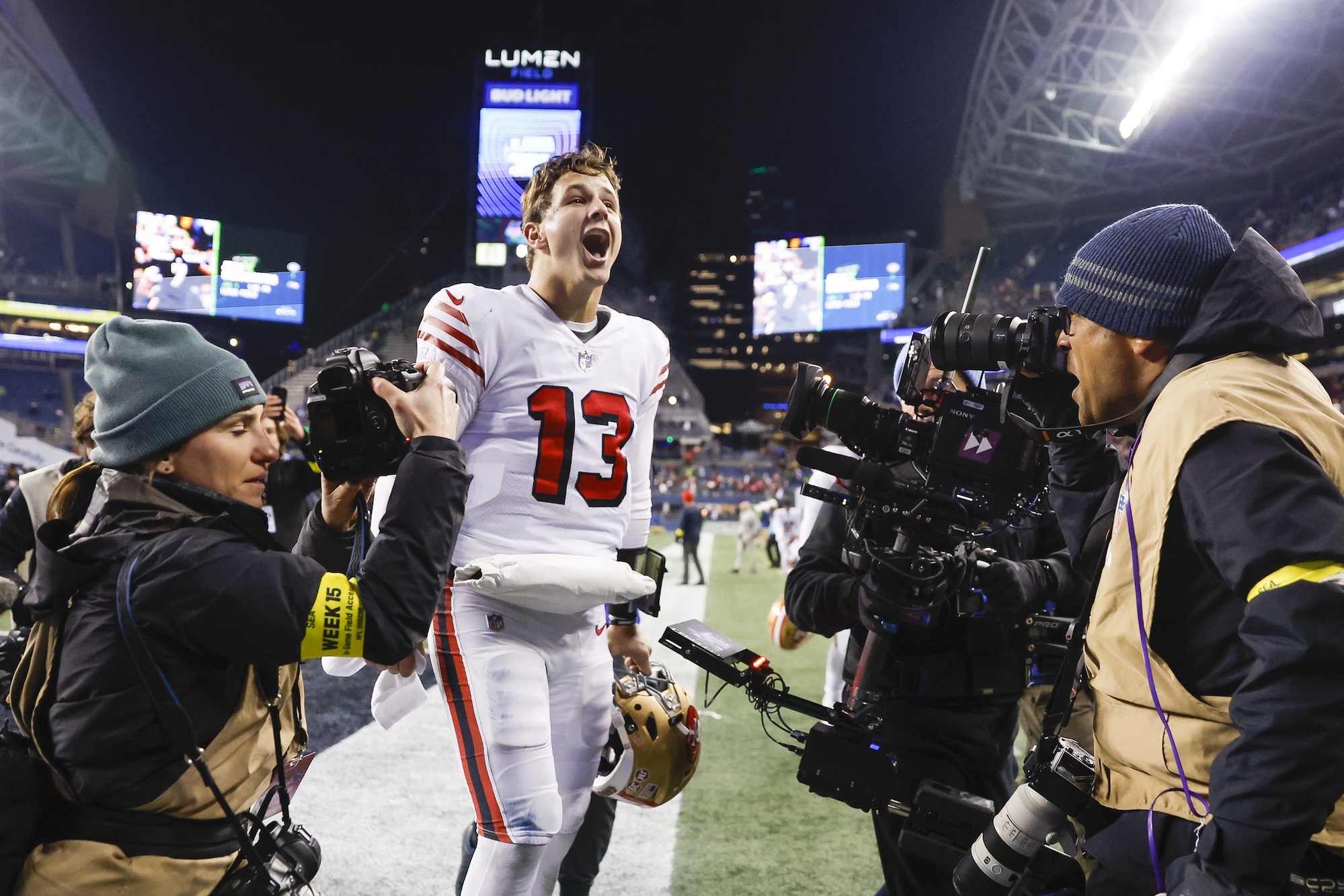 Deemed ‘Mr. Irrelevant’ by the nature of being selected with the No. 262 overall pick back in April, San Francisco 49ers quarterback Brock Purdy has been everything but this fall. QB3 on the depth chart as training camp arrived, a path to snaps looked far-fetched for the former Iowa State standout. Slotted behind former top-five pick Trey Lance and veteran Jimmy Garroppolo, third-team snaps and meetings were his gamedays. It was exhaustive prep work for a chance at the seemingly impossible. Then football happened.

The now de facto leader of the newly crowned NFC West champs, Purdy has become not just one of the more bizarre stories of the 2022 campaign, but a player that’s thrown a hefty wrench into the future under center for head coach Kyle Shanahan. In a season expected to be spearheaded by Lance and assisted by Garoppolo if needed, injuries—as they often do for the 49ers—reared their ugly head at the sport’s most important position. But under the tutelage of Shanahan and within an offense littered with playmakers, Purdy’s grace period to success has been erased with production arriving in waves despite him just getting his feet wet at the NFL level.

With an offensive blueprint lauded for allowing quarterbacks to keep it simple in the pocket, Purdy has executed to a T over the last three weeks. With six touchdowns compared to just one pick and three consecutive wins, he’s looked the future for a franchise that entered the campaign with a large list of questions to be answered at the quarterback spot. As much as it’s been about Purdy being an efficient distributor of the football, the ways in which Shanahan has allowed him to get into rhythm is a recipe that works at all months of the season.

Let’s look back to his first start against the Tampa Bay Buccaneers. With weapons in abundance, the name of the game is getting athletes in space, and at the tight end spot, there aren’t many better than George Kittle. A safety blanket that can also wiggle after the catch, this is pitch and catch with Tampa Bay working in zone behind a blitz. Aligned with Christian McCaffrey to his shoulder, as the play progresses and Keanu Neal (22) roams down to shade Brandon Aiyuk (11), Purdy pumps the ball to Kittle down the hashes in front of the closing safety. It’s a nice job by the all-everything flex talent to get his head around while recognizing coverage—while Kittle would have preferred to have the ball on his numbers to avoid a hit to his ribs, this is a good job of Purdy hitting his first read for an easy gain.

Again, athletes in space, and Deebo Samuel is one of the most versatile talents in football. A quick way to get the ball out of his hands is by running a quick bubble inside the red zone. This allows Samuel to use his explosiveness and counter the pass rush of the Buccaneers. Simplifying Purdy’s reads has been paramount for Shanahan, and when you have a variety of weapons to pepper on the perimeter, Purdy doesn’t have to pull rabbits out of his hat to put points on the board.

And as soon as you prepare to stall McCaffrey, Samuel, and Kittle, and you finally get a free rusher in his face, he makes Joe Tryon-Shoyinka whiff.

This is a play you simply can’t draw up on a chalkboard. Purdy’s ability to reset, square his body, and make a throw amid an army of bodies on the move is high-level quarterbacking. Really, it’s his confidence within chaos. With more snaps comes an even higher level of willingness to make a big-time play, a key as San Francisco prepares for a playoff run.

This is where it all comes together. A beautifully designed play that allowed McCaffrey a free release off the line of scrimmage, Purdy couldn’t have walked up and placed the ball in a better spot. Scheme, talent, execution, it’s all quickly come together with him at the helm.

While I won’t sit here and anoint him as the next coming of Joe Montana or Steve Young in San Francisco, executing a playbook is something the seventh-round rookie has mastered early on in his career. Just two starts in, there’s a long way for him to go and teams will make it increasingly tougher on him to execute as more tape on his game becomes available. However, Purdy has been nothing short of excellent since he’s been given the keys to an offense that’s as quarterback-friendly a scheme as there is in the league today.