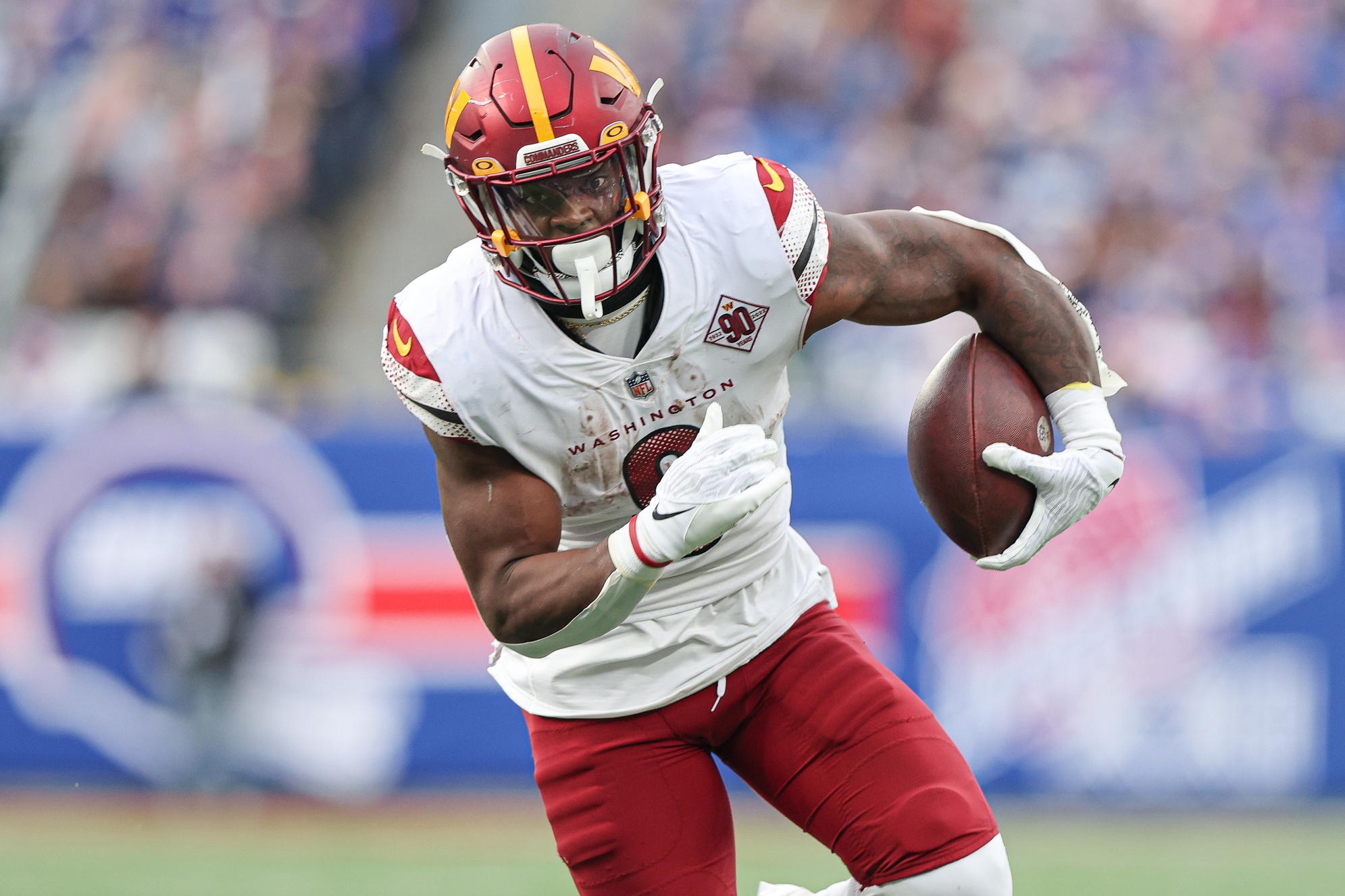 Brian Robinson Jr. Looks Like RB Commanders Can Build Around

The Washington Commanders may have suffered a gut punch of a loss on Sunday night, but the future of their backfield is clearly in very good shape. The continuing emergence of rookie running back Brian Robinson Jr. this season has been something truly special.

Perhaps the craziest part of Robinson’s rookie season so far is the fact that it nearly never happened. During an attempted carjacking in late August, the rookie was shot twice in the leg, which (obviously) put his first NFL season in jeopardy immediately. Somehow, by Week 5 of the regular season, Robinson was active and on the field.

He’s been the starter almost every week since then, and he’s done just about everything to prove that he is ready to take over Antonio Gibson’s reins as the Commanders’ bellcow back. Robinson has taken the lion’s share of carries over the last 10 weeks and has been incredibly productive with them. When the rookie gets going downhill, he looks nearly impossible to tackle—you’d never be able to tell he suffered any kind of injury to his legs, let alone two bullet wounds.

And here we have @BrianR_4 dragging two Philly defenders for a good 6 yards. pic.twitter.com/xvhdNllSEC

That’s not something that has changed or diminished as the season has gone on, and over the last few weeks in particular, Robinson has really started to kick things into another gear. In Week 12’s win over the Atlanta Falcons, the rookie cemented his role as Washington’s RB1 with his 18 carries to Gibson’s nine, generating 105 rushing yards along with 20 yards receiving and a caught touchdown. Against the New York Giants one week later, he put up 96 yards on 21 carries, once again more than doubling up Gibson’s looks and production.

Ironically, Robinson’s best game may have come this past week—once again against the Giants—despite seeing the fewest number of carries in a game he’s started this year. On just 12 rushes, the rookie put up 89 rushing yards. That’s an average of 7.42 yards per carry, which probably isn’t news for anyone who was watching the game. Somehow, Robinson looked even more unstoppable than he had all season, attacking creases with explosiveness at the line of scrimmage and driving his feet through contact even as those creases began to close.

Love the brand of football that Brian Robinson plays. pic.twitter.com/JUYcp0cm8e

Brian Robinson, out of the shotgun, converts the 4th down and picks up a chunk of bonus yards too.

As great as his ability to generate yards after contact is, the Alabama product deserves recognition for his patience and vision as well. When he can, Robinson is more than happy to follow his blockers and avoid contact to generate even more yards once he has the ball in his hands. To that end, even when an occasional play looks broken from the snap, Robinson is capable of finding a way to turn it into positive yards.

In the blink of an eye (and two consecutive plays) the Commanders are in the redzone!#HTTC | @BrianR_4 pic.twitter.com/yNaMWxcpEW

Brian Robinson with the patience and vision to find the cut back and make a man miss to turn what easily could have been a 3rd and 10 into a 1st down pic.twitter.com/WRCrKurGOq

Aside from the missed calls and ridiculous penalties the Commanders had to deal with at the end of the game, the most surprising part about that game was Robinson not getting more looks. The guy had been balling out in the two weeks beforehand and was averaging over seven yards per carry on Sunday Night Football. So why give him just 12 carries as quarterback Taylor Heinicke’s completion rate rested under 60 percent on the day? Why, after a controversial penalty call on receiver McLaurin’s alignment, did Robinson not get at least one more carry on third down with six yards to go, one minute left on the clock, and a timeout remaining?

Regardless of Washington’s decision-making, Robinson is going to get more chances to take over games for the Commanders in the future. He’s an excellent bellcow back who has only gotten better as he’s accumulated carries over the course of this season. As the future face of Washington’s run game, the offense in the nation’s capital is clearly in good hands.