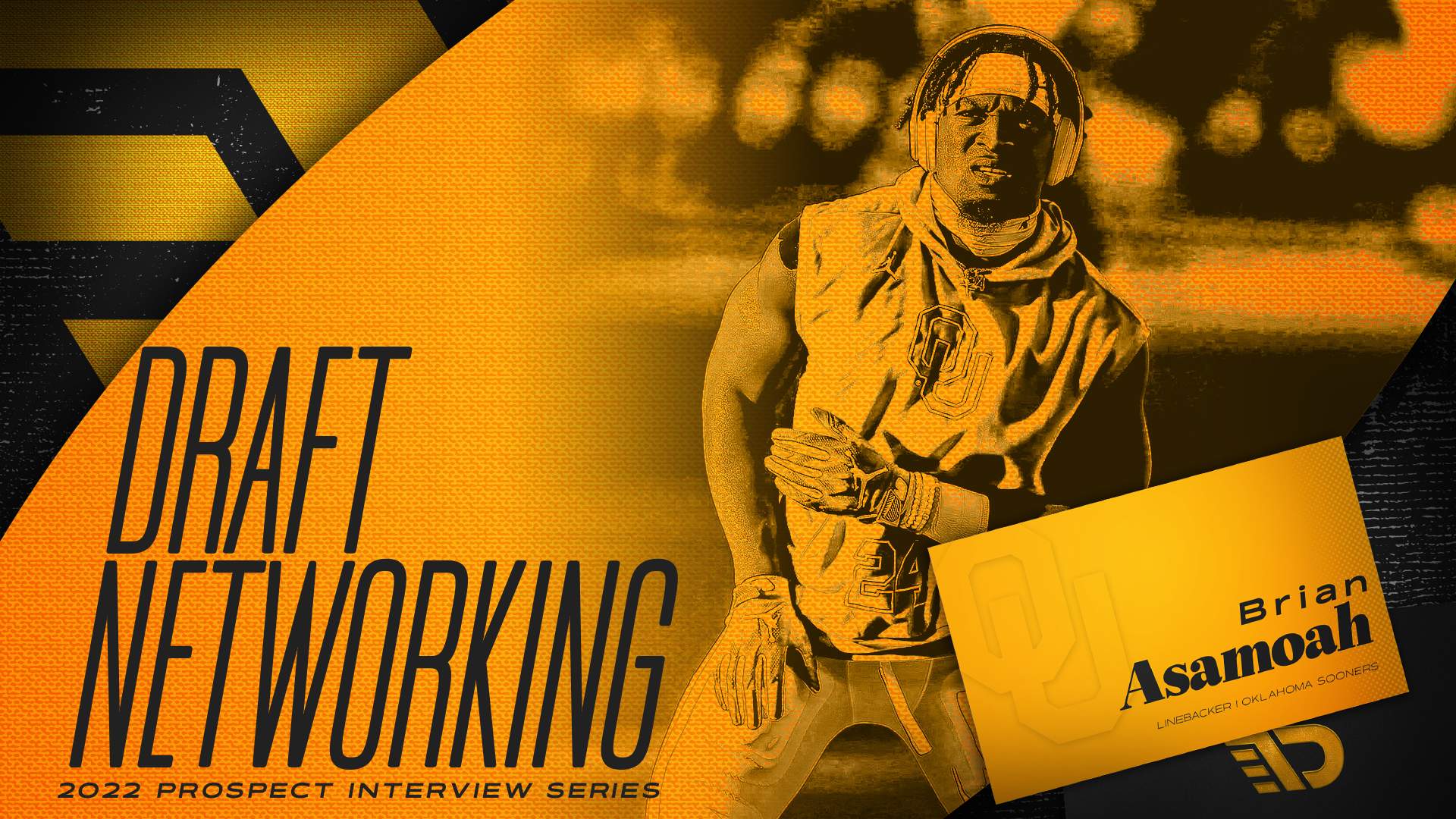 Oklahoma’s Brian Asamoah is one of the most exciting and dynamic linebacker prospects in the 2022 NFL Draft. On tape, Asamoah routinely displays the quick-twitch ability to play sideline-to-sideline while covering every inch of grass on any given snap. Asamoah carries the appearance of a true three-down linebacker at the next level thanks to his capabilities to play both in the run game and in pass coverage.

Asamoah recently spoke exclusively with The Draft Network about his experience at the NFL Scouting Combine, why he feels he improved his draft stock in Indianapolis, what he most loves about playing the linebacker position, which teams have expressed interest in him, and so much more.

JM: I thought you had a terrific season in 2021. You led the team in tackles with a career-high 90 takedowns. What about your game changed last season?

BA: I was aware of what my weaknesses were headed into the season. It was my last season of college football. I tried to improve those areas of my game so that I could experience a proper final season at Oklahoma.

I became more coachable, to be honest with you. I became a better defender against the run. I became a smarter player when analyzing our opponents. It allowed me to make plays. Those are the things I focused on throughout the summer. I came into the season with clear goals in mind.

JM: It pops on tape. What’s your favorite aspect of playing the linebacker position?

BA: I love being able to run sideline to sideline. A lot of defenders don’t get the opportunity to do that. I can make plays up the middle and on each sideline. I understood how teams were trying to attack us. That allows linebackers to diagnose the offense and make plays. I love diagnosing and triggering downhill.

JM: You took the words right out of my mouth. On tape, I see an extremely dynamic athlete with sideline-to-sideline ability. How would you describe the way you approach the game?

BA: I approach every game like it’s my last game, to be honest with you. You never know when this game is going to be taken away from you. The most important game is the next one. Every defensive series is an important series. That mindset makes me want to make a play on every single snap. That mindset helps you become a leader of the defense. What you say and what you do matters. It dictates the entire attitude. That’s my approach to every single game.

JM: You’re quick to diagnose plays in the run game. You touched on that. How did you develop that aspect of your skill set?

BA: You have to understand how offenses want to attack you on first and second down. You have to understand formations as well. There are certain plays you can make in certain formations and those are the things that allowed me to play with terrific play speed this past season. When you understand what’s really going on around you, it just gives you an opportunity to play faster and make plays. I understood different types of coverages and formations. I knew what was coming before the play even started.

JM: Your instincts jump off the screen. What was your experience like at the combine?

BA: Man, that was a fantastic experience. To be one of 324 prospects that received an invite was truly a blessing. It gave me an opportunity to showcase my athleticism. It was a surreal moment for me. I was so excited for the opportunity.

JM: You had a terrific week. You showcased your explosiveness by recording a 36.5-inch vertical and 124-inch broad jump. How do you feel about your performance?

BA: I think I put forth a smooth performance. I obviously wanted to run a 4.4 but I wasn’t able to achieve that personal goal. I think the 4.54 in the 40-yard dash was still a good result. Other than that, everything was smooth. Some of the results were amazing. The vertical and broad jumps were great as you said. It was a smooth day overall.

JM: Do you feel like you improved your draft stock in Indianapolis?

BA: I think I definitely did. It was a great opportunity for me to showcase my abilities. I started that process at the Senior Bowl and I built on that momentum at the combine. I feel like I definitely improved my stock in Indianapolis. We began building those relationships. I showed my range and ability to cover. I also did well throughout the on-field portion and that was extremely important. I showcased some great footwork and quick-twitch movements on the field. I definitely improved my draft stock.

JM: You touched on building those relationships. Which teams did you meet with formally throughout the week, and how do you feel like your team meetings went?

BA: I met with a lot of teams, but I’m going to keep that information discreet out of respect to the teams. I met with a bunch of teams and did a lot of interviews. I thought they went really well. I’m super excited to find out what the future holds for me. We started learning about team needs, schemes, and how I can fit into their system. We talked about how I can make plays within their scheme. The interview process was amazing, man. It went smoothly.

JM: What was the strangest question a team asked you at the combine? We’ve heard some crazy stories in the past. One guy was asked to play basketball on a mini-hoop this year (laughs).

BA: I played a little basketball in one of my interviews as well (laughs). I had the same basketball situation. It was great.

JM: That’s hilarious. What do you think is the best game you ever played in an Oklahoma jersey and why?

BA: I would point to the game I played against Baylor this past season. We played that game on the road at Baylor. The reason why I picked that game is because I felt so good going into it. I felt great about my tape study throughout the week. If you watch that game of mine, the tape speaks for itself. I had like 10 tackles and I forced a fumble. Unfortunately, we didn’t win that game so it was very bittersweet for me. I think that was my best game, to be honest with you.

JM: It’s a pass-happy league nowadays and I think you’re athletic and instinctive enough to thrive in coverage at the next level. What do you enjoy about playing in coverage?

BA: I love playing in coverage. You can use me as a coverage linebacker. I can cover tight ends and running backs in single-man coverage. I can handle those matchups and responsibilities. I feel great one-vs-one. You said it, man, it’s a pass-happy league. I understand the route tree and I can take things away in the passing game. I’m that guy that can play that role for you. I’m excited to get into a defense and figure out my role. It’s a big part of my game.

JM: I’ve really appreciated your time today. What kind of impact is Brian Asamoah going to make at the next level?

BA: I’m going to make a huge impact. My ceiling is extremely high. I have high-level goals for my rookie season and I plan to achieve those goals.

I’m super excited to get to the league and hit the ground running. I’m going to take my opportunity and run with it. I’m blessed to be in this position. Whoever drafts me is going to get one hell of a player. I play for my teammates. I’m trying to become a future Hall of Famer.