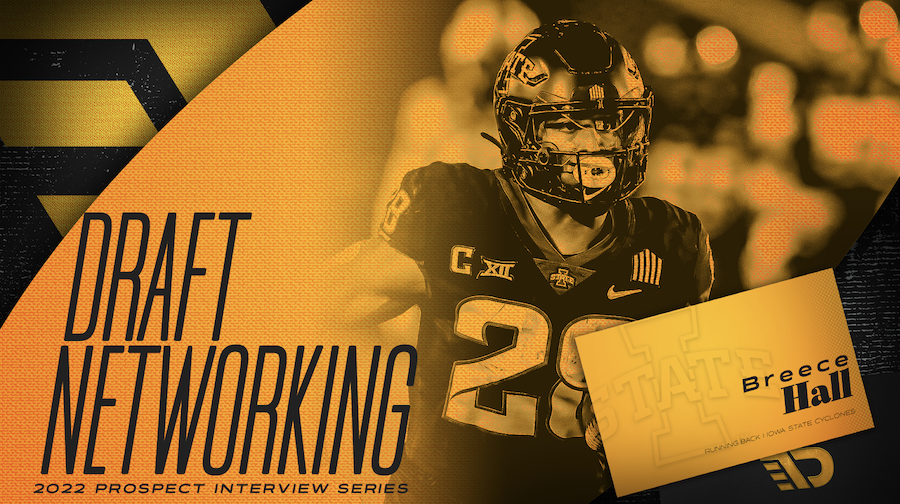 Iowa State’s Breece Hall has an excellent chance to be the first running back selected in the 2022 NFL Draft. Hall was absolutely electric throughout his final two campaigns as a Cyclone en route to compiling an astounding 3,526 all-purpose yards and 46 touchdowns while collecting several school records on his journey.  Hall’s combination of size, vision, and patience makes him an incredibly intriguing ball-carrier.

A high-level producer, Hall has showcased himself nicely throughout the pre-draft process. The Wichita, Kansas native exploded at the combine by recording a 4.39 in the 40-yard dash, a 40-inch vertical, and a 126-inch broad jump. These results led to an eye-popping RAS score of 9.95.

Hall recently spoke exclusively with The Draft Network about his well-rounded skill set, his experiences and performance at the combine, his patience as a runner, which schemes best suit his running style at the next level, and so much more.

JM: You had one of the most successful collegiate careers at the running back position in recent memory. You accounted for 3,526 all-purpose yards and 46 touchdowns throughout your last two seasons. How do you look back on your time at Iowa State?

BH: It’s really crazy. When I arrived at Iowa State, I was just a 17-year-old kid who graduated from high school early. I was trying to find my way and my place in the world as I transitioned into adulthood. I was looking up to those older players, and before I could blink, I had our younger players looking up to me.

My time at Iowa State really matured me. It made me a better person and a better football player. Being around some of the people I was around at Iowa State, they helped mold me into the leader I wanted to be. That’s how I look back on my time at Iowa State. I learned a lot of lessons throughout my tenure there.

JM: It’s a terrific program. One of the things that jump out about your skill set on tape is your ability to display the necessary vision before showcasing great burst through the hole. How did you become such a patient runner?

BH: I feel like that happened extremely naturally for me. Several factors played into that, including the type of offensive system we ran and other reasons that extend beyond our scheme. I have an excellent feel for the game. I played quarterback, running back, and middle linebacker growing up. I feel like I’ve always played the game with a terrific amount of control. I’m always in control of whatever I’m doing, both from an offensive and defensive standpoint. As a running back, I feel like I control the overall pace of the game. That stems from playing so many positions when I was younger.

JM: It shows on tape. You recently participated in the NFL Scouting Combine and you showcased high-level athletic traits by recording a 4.39 in the 40-yard dash, a 40-inch vertical, and a 126-inch broad jump. All three of these results are elite. Do you feel like you surprised some people in Indianapolis?

BH: Coming into the combine, doing some of those interviews, coaches were telling me I was going to run in the high 4.4s or low 4.5s. That’s what I was hearing. I really just wanted to show everybody that I’m just as fast and just as athletic and I can do a lot of the same things that the smaller ball-carriers can do. Some of the coaches I was speaking with were definitely underestimating what I was capable of from a testing perspective. I definitely didn’t like that.

JM: You must have felt extra great when you saw that official 4.39 in the 40 then.

BH: Yeah, it felt great. I wasn’t surprised by the results though. During my run, I felt like I had a great start and I felt like my transitions were extremely smooth and efficient. I just feel like my pre-draft training helped prepare me to run extremely fast and put up the desired result in the 40. Once I saw the 4.39 on the jumbotron, I felt like everybody turned their heads and looked at me. I wasn’t surprised. I expected that.

JM: We love to hear that. Which teams did you meet with formally at the combine, and do you have any top-30 or virtual visits coming up?

BH: I met with a bunch of teams at the combine and throughout this process. I’d estimate somewhere between 16 and 24 teams. All of my meetings have gone really well. Sitting in the meeting rooms with the coaching staff has been an awesome process. It’s giving me great vibes. I’m answering questions and building relationships with different teams. I felt like I was in the hot seat (laughs). I have some top-30 visits coming up, but I’m keeping the details private at this time.

JM: There’s a lot of interest in you and it’s easy to see why. What was the strangest question a team asked you at the combine?

BH: The Atlanta Falcons wanted to know how my family members would describe me. They asked me how I think various members of my family would describe me in one word. I answered with the word “different” and they followed up by asking what if I hated my family? (laughs). I answered by saying your family is the people you choose to surround yourself with, it’s not just about being blood-related. That was one of the weird ones. When I had a formal meeting with the Philadelphia Eagles, they asked me to shoot five jump shots on a mini-hoop and I made four out of five (laughs). That was a little weird.

JM: We’ve heard that basketball story with the Eagles a few times now. You shot 80% from the field, which means you may have shot up their draft board! Iowa State ran a zone running scheme throughout the majority of your time there. How do you think playing in that scheme helped prepare you for the NFL, and do you feel that scheme fits your play style best at the next level?

BH: I feel like I can fit any style and play in any scheme. I just like having the ball in my hands. That’s how we approached the offense at Iowa State. They wanted to get me out in space, running 12 and 13 personnel with big tight ends. They let me pick where I want to go and how I wanted our run fits to look. We weren’t always in zone. We ran some power and counter as well. We ran outside leads and outside zone. They prepared me to play in every scheme in the NFL.

JM: You enjoyed your best season as a pass-catcher in 2021, recording career-highs in receptions (36), receiving yards (302), and touchdowns (3). Today’s NFL is all about running backs that can catch the ball. If teams have questions about your abilities as a pass-catcher, how do you plan to address those questions?

BH: I would just tell them to watch my film. That’s all they have to do. Just look at the film. For every coach that has asked those questions, I’ve literally told them to watch the film. If you see some of the catches I’ve made, I feel like I made some pretty remarkable catches throughout my time at Iowa State. The film speaks for itself.

JM: You don’t shy away from contact and the physical aspects of the game. How did you develop that mentality?

BH: From a young age, I quickly learned to deliver the hits instead of taking them (laughs). That’s where that stems from.

JM: What do you feel are the most important traits a running back must possess?

BH: We touched on catching the ball earlier. Everybody has to be able to run the ball but playing in the passing game is so important in today’s league. That sentiment extends to pass protection as well. Last but not least, I would say you have to take good care of the football. You can’t fumble the ball and put it on the ground. Turnovers can swing the momentum and outcome of a game.

JM: Those are three important traits. I’m going to put you in a scenario I enjoy putting running backs in. Which do you prefer, a 75-yard touchdown run, or carrying the ball six-plus times on a long scoring drive?

BH: It depends on the in-game situation. When does the 75-yard scoring touchdown occur? When we’re talking about six carries on a long drive, if we’re trying to beat a team up and wear them down or whatever, I definitely like that. That’s what our team needs at that moment. If we’re talking about one of the first plays of the game and I take it 75 yards to the house, we capture that momentum immediately. Both scenarios can pay off at different moments. It can go both ways.

JM: That’s a terrific point. I’ve really appreciated your time today. I feel like this conversation has highlighted why you’re one of the few high-level ball-carriers in this draft class. Why should Breece Hall be the first running back selected in the 2022 NFL Draft?

BH: There isn’t another running back in this class that can do what I do with the ball in my hands.