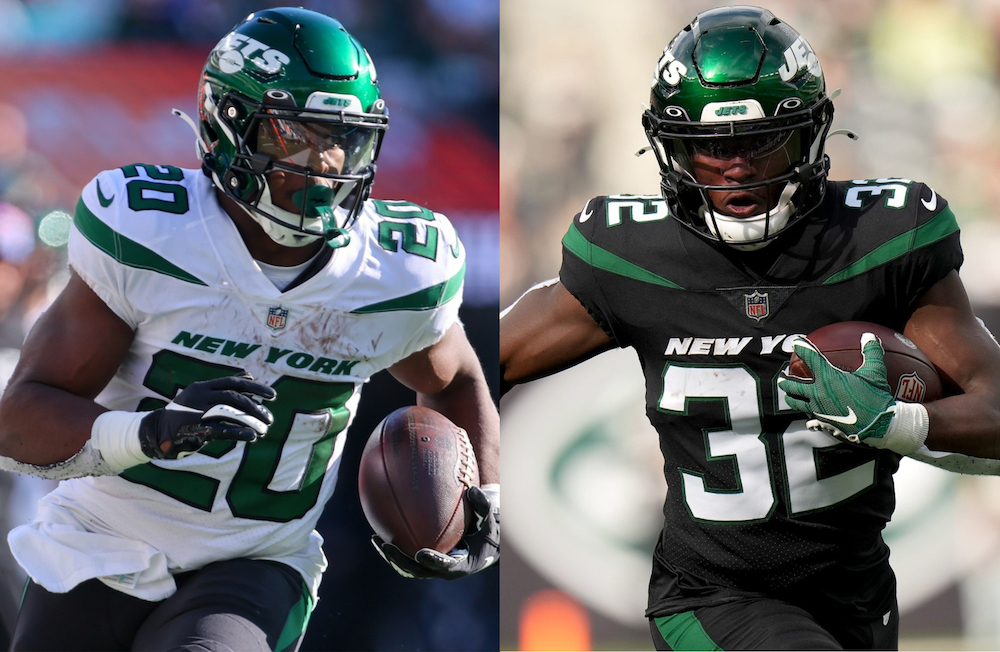 The New York Jets already had a young running back that showed flashes of dominance—Michael Carter—when they drafted Iowa State’s Breece Hall in the second round of the 2022 NFL Draft. It’s only been five weeks, but they’re already enjoying the extra benefits of having a young and even more talented backfield brimming with potential.

Carter was one of the best breakout surprises for the Jets during the 2021 season. After opening the year behind Tevin Coleman and Ty Johnson on the depth chart, Carter broke out as a dual-threat running back halfway through his rookie season. By the end of the year, he had firmly established himself as being worthy of three-down back status with his 964 yards from scrimmage despite missing three games and starting just 11 all year.

So when the Jets not only drafted a running back but took a prospect as highly regarded as Hall early in the second round, it came as a surprise. It seemed as if New York already had the young back to pair with quarterback Zach Wilson as a building block at the core of their offensive rebuild. Why would they draft another running back so early in the draft and suggest they were looking to potentially unseat Carter as a lead back?

Through the first few weeks of the season, that was a question that remained unanswered. Carter opened his second season as the featured back in the offense, and with Wilson missing, got his fair share of touches and production as both a receiver and rusher. Hall, on the other hand, wasn’t seeing the ball as much—he stood out with his explosiveness when he did get touches, though.

By the time Week 4 rolled around and Wilson returned, Hall seemed to have unseated Carter. One week earlier, he had officially gotten more offensive snaps for the first time—40 to Carter’s 38—and the new kid on the block took the lion’s share of carries against the Pittsburgh Steelers with 17 to Carter’s nine. Hall also saw twice as many targets as Carter did in Week 4 and finished with 78 total yards from scrimmage, nearly tripling Carter’s 29 scrimmage yards. It wasn’t like Carter was just limited to short-yardage or goal-line situations in Week 4, either. He had plenty of opportunities to contribute on first and second down, Hall was just the better all-around back last week.

Week 5 featured more of the same, except this go-round was something of a coming-out party for Hall, who finished with 97 rushing yards paired with 100 receiving yards on just two catches. Carter, for his part, had plenty of opportunities against the Miami Dolphins early to re-establish himself as the leader of the tandem after Hall’s solid Week 4 showing but never got things rolling. He finished with just 21 yards on 10 carries with a couple of catches for 12 yards as well. Instead, it was the rookie who gashed Miami for nearly 10 yards per touch and has all but officially supplanted Carter as the Jets’ new lead back.

That doesn’t mean Carter has completely lost his role in the offense or looks like he’s lost a step. Quite the contrary. Carter’s stat line was impacted significantly with a few rushes for negative yardage, but his performance against Miami also featured some nice runs with good stiff arms and elusive moves on goal-line carries to help give his team breathing room in the final quarter.

The Jets were also able to take advantage of having such a talented backfield tandem to rip off some big plays out of T-formation. New York’s biggest play of the game came when Wilson faked a handoff to Carter as Hall ran a wheel route out of the backfield. The Dolphins bit so hard on the play fake that Hall was left wide open, and he rumbled his way down to the 1-yard line with an impressive display of toughness and yards-after-catch ability before Carter punched it in.

Yes, Hall deserves tons of attention for his breakout game against Miami last weekend, but don’t count out Carter just because of his lack of statistical production. Like Hall, the second-year back is more than capable of hitting the home run with his explosiveness and ability to elude defenders and can still be a real contributor on offense in both the passing and run game. The Jets will continue to take advantage of having two talented, young backs to work with all year, regardless of who is the “official” starter or lead back.