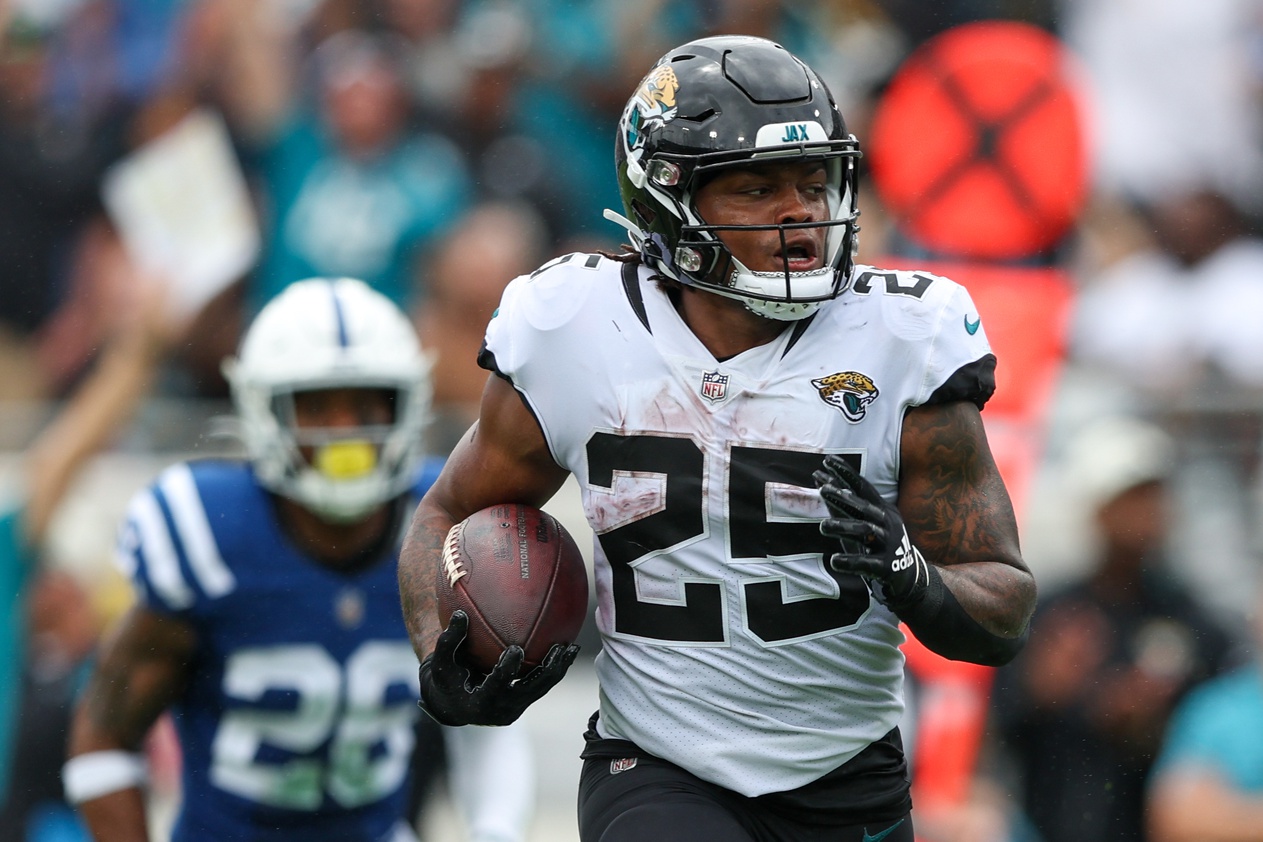 3 RBs Jets Could Trade For After Breece Hall Injury

New York Jets rookie running back Breece Hall suffered a serious ACL injury in Sunday’s victory over the Denver Broncos, according to multiple reports. Prior to departing the contest, Hall had totaled 72 rushing yards and a touchdown on just four carries, including an explosive 62-yard score that saw Hall reach a season-high 21.87 MPH, per Next Gen Stats.

Hall has totaled 463 yards and four touchdowns on 80 carries this season. He’s averaging 5.8 yards per carry. It qualifies as a catastrophic blow to the Jets’ offense.

No ball carrier has run faster this season than Breece Hall

The surging 5-2 Jets are winners of four consecutive contests and shockingly find themselves in postseason contention. Jets general manager Joe Douglas must consider acquiring a running back ahead of the Nov. 1 trade deadline. No. 2 running back Michael Carter will take on a larger role in Hall’s absence, but Carter is most effective when paired alongside another back a la Hall.

Wilson can’t be thrilled with San Francisco’s decision to acquire fellow running back Christian McCaffrey via blockbuster trade. Prior to McCaffrey’s arrival in San Fran, Wilson had totaled 400 rushing yards on 81 carries. That equals an efficient average of 4.93 yards per carry. Wilson recently exploded for a 120-yard performance. Wilson even ran for 54 yards on seven carries (7.7 yards per carry) during Sunday’s blowout defeat to the Kansas City Chiefs despite splitting time and carries with McCaffrey.

Wilson is performing like a top-32 running back that deserves a starring opportunity down the stretch.

Both Jets head coach Robert Saleh and offensive coordinator Mike LaFleur have a history with Wilson. Saleh and LaFleur coached Wilson for three seasons (2018-20) in San Francisco before accepting promotions with the Jets. Wilson has spent his entire career executing LaFleur’s preferred outside zone running scheme alongside Kyle Shanahan in San Francisco. Wilson’s familiarity with LaFleur’s system makes him a perfect fit in New York.

Travis Etienne has taken over Jacksonville’s backfield. Etienne has accounted for an astounding 341 total yards of offense throughout his last three appearances. He’s averaged 8.5 yards per touch as a ball-carrier and receiver during that stretch. Robinson has seen his playing time decrease as a result. Robinson played 30 snaps in Week 5 and 27 snaps in Week 6. On Sunday, Robinson played a season-low 12 snaps while Etienne exploded for a career-high 114 rushing yards. It marks the third-lowest snap total of Robinson’s career. This is no longer a timeshare.

Robinson is set to become a restricted free agent at the conclusion of the current campaign. Robinson’s future likely resides elsewhere. Losers of four consecutive contests, the 2-5 Jaguars no longer appear to be legitimate postseason contenders in the AFC South. General manager Trent Baalke would be wise to begin fielding calls on trade opportunities for Robinson ahead of next week’s trade deadline. The Jets represent an ideal landing spot.

It’s just a matter of time before Akers departs the Los Angeles Rams for his next franchise. Rams head coach Sean McVay recently confirmed the two sides are working through some differences. Akers isn’t thrilled with his involvement in McVay’s offense, and a split appears inevitable.

Akers has rushed for 151 yards and a touchdown in five regular-season appearances this season. The former FSU product is inherently familiar with the Jets’ offensive system. McVay runs a similar scheme to what LaFleur is calling in East Rutherford. It’s essentially all an iteration berthed from the Shanahan coaching tree. Akers would have little issue adapting to his new surroundings. The injury to Hall could provide Akers with exactly what he’s looking for—an opportunity to play a sizable role.