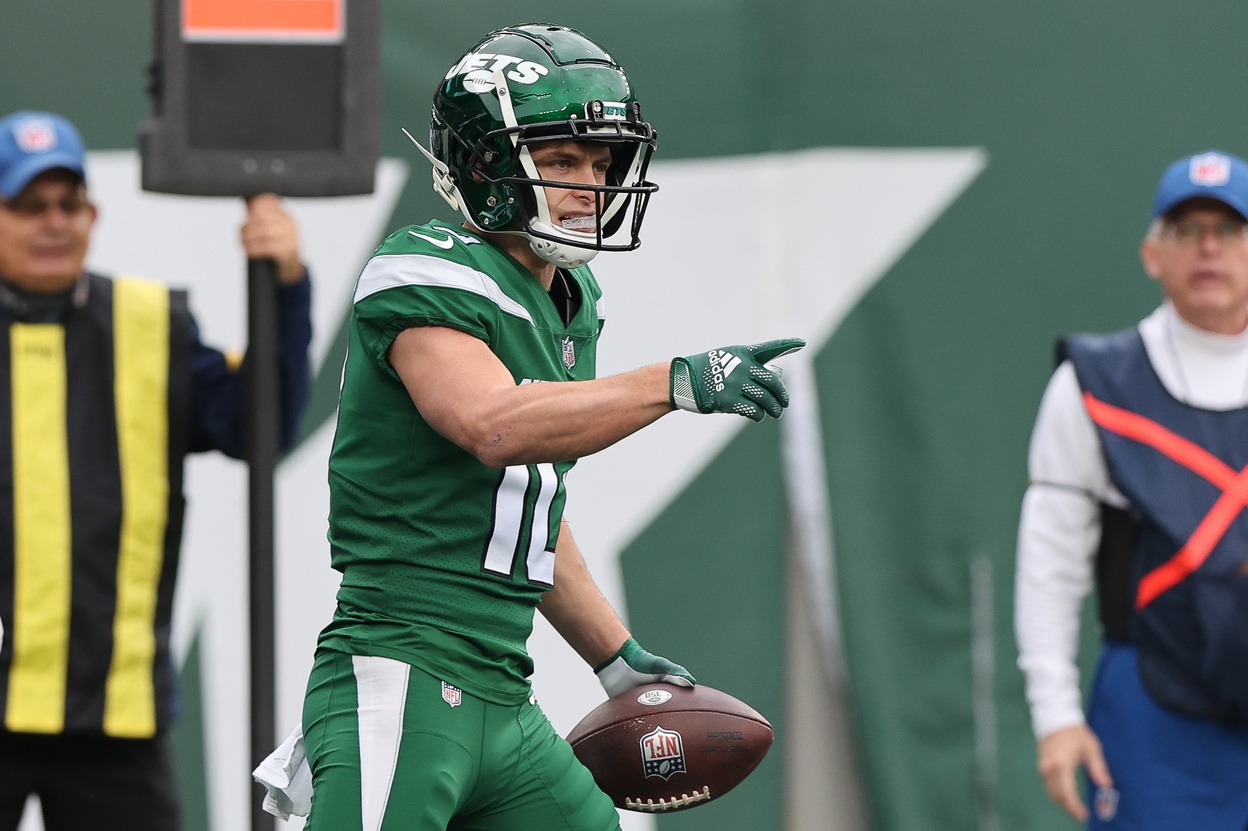 The New York Jets have not had much luck in the injury department, particularly at the wide receiver position. General manager Joe Douglas made a pair of notable efforts to enhance New York's group of wide receivers in the offseason as the Jets prepared to surround rookie quarterback Zach Wilson with talent in the pass-catching department. Firstly, Douglas added former Titans receiver Corey Davis via a lucrative but fair three-year, $37.5 million contract. Davis had experienced a breakout season in Tennessee in 2020, recording a career-high 984 receiving yards and five touchdowns while playing second fiddle to A.J. Brown. Davis was largely expected to secure New York's receiving corps while serving as their No. 1 pass-catcher but unfortunately appeared in just nine games before his season came to an end after undergoing core muscle surgery. It was a similar outcome for rookie Elijah Moore, who electrified in 11 appearances before landing on IR with a quad injury of his own. Injuries to Davis and Moore ravaged New York's wide receiver depth chart while simultaneously freeing up targets and opportunities for other players on the roster. One such player is Braxton Berrios, a former sixth-round selection of the New England Patriots back in 2018. Berrios has made the most of those opportunities in recent weeks while proving he's a legitimate NFL receiver worthy of receiving playing time. In New York's last four games, Berrios has caught 20-of-29 targets for 180 receiving yards and one receiving touchdown. Berrios possesses some dual-threat ability as a player capable of handling jet sweeps and other creative manners that get the ball into his hands and has also scored two rushing touchdowns over that time period—he also had a special teams score. Berrios was especially productive in Sunday’s nail-biting loss to the Tampa Bay Buccaneers, having scored a pair of touchdowns on a career-high 10 touches. Berrios' unexpected uptick in production could lead to meaningful contract extension talks in the coming weeks, as Douglas and the Jets would be wise to make keeping him in New York a priority. Sweeping changes are coming to New York's receiver room ahead of the 2022 campaign. While Davis and Moore will undoubtedly return in the two starring roles, things get murky beyond that. Another core receiver currently slated to join Berrios in free agency, Jamison Crowder is set to hit the open market and the soon-to-be-29-year-old slot receiver is expected to pursue opportunities elsewhere. Former second-round selection Denzel Mims is under contract for 2022 but is hardly guaranteed a roster spot after experiencing his second disappointing campaign in a row. With Mims and Crowder unlikely to factor into New York's plans, retaining the services of the surging Berrios may become all that much more important. The Jets will likely take additional measures to address the receiver position, either via a mid-sized free agent signing or draft pick—or both. But keeping Berrios around following his impressive late-season surge qualifies as a move Douglas would be wise to aggressively pursue as he prepares to make every attempt imaginable to transform the Jets into legitimate playoff contenders next season.