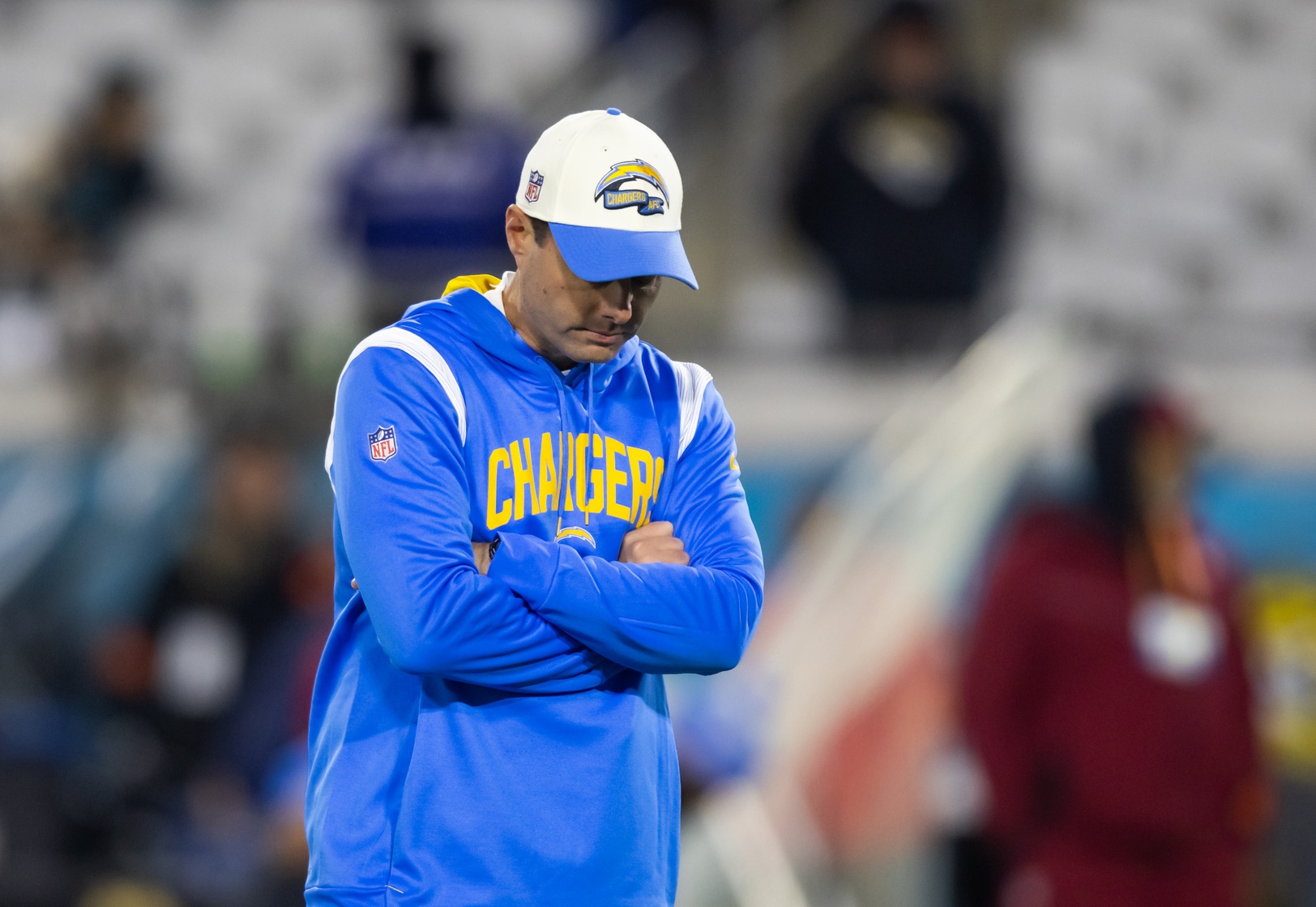 Should Chargers Make A Coaching Change?

The Los Angeles Chargers suffered a historically bad defeat to the Jacksonville Jaguars in Saturday’s wild-card embarrassment. The Chargers lost 31-30 despite building a sizable 27-0 first-half lead. It culminated in the third-largest comeback in playoff history. The Chargers may consider firing Brandon Staley as a result.

The Chargers’ first postseason appearance in four years ended in a total meltdown. The Jaguars played a bold and confident second half. Head coach Doug Peterson went for two-point conversions and executed fourth-down attempts. By comparison, the Chargers were shell-shocked and went into self-preservation mode. Staley and his coaching staff must be held accountable.

Firing Staley wouldn’t feel reactionary. The Chargers felt like a disappointment all season long. They entered the 2022 campaign as potential Super Bowl favorites. Third-year quarterback Justin Herbert was considered a preseason MVP favorite. General manager Tom Telesco enjoyed an aggressive offseason that saw his defense acquire the likes of J.C. Jackson and Khalil Mack. It all led to disappointment as the Chargers crawled to an unconvincing 10-7 record before suffering Saturday’s shameful loss.

The Chargers never appeared capable of competing alongside the Kansas City Chiefs for this season’s AFC West division title. And make no mistake, that was their expectation. Staley’s Chargers won two of six divisional contests, splitting the season series with the lackluster Denver Broncos and Las Vegas Raiders all while failing to rub shoulders with the AFC’s elite.

Should Staley manage to survive, he should be forced to make a few coaching staff changes at a minimum. Offensive coordinator Joe Lombardi has especially been uninspiring. The Chargers finished the regular season scoring a rather pedestrian 23.0 points per contest. They’re the league’s 13th-ranked scoring offense.

There aren’t any personnel-related issues preventing the Chargers from being a top-five scoring offense. Herbert is an elite NFL quarterback and running back Austin Ekeler is a premier dual-threat back with a special nose for the end zone. Yet when watching Los Angeles’ offense, you’ll never mistake them for the likes of Buffalo, Kansas City, or Cincinnati. Herbert is every bit as talented as Patrick Mahomes, Josh Allen, and Joe Burrow. The difference is that those quarterbacks don’t suffer from coaching malpractice. Passing game coordinator Shane Day shouldn’t be safe, either.

Staley’s hand-selected offensive coordinator has failed to generate the desired results. Staley himself is a defensive-minded coach. The Chargers must be elite in that department, right? Wrong. They’re middle of the pack at best. The Chargers allowed opponents to score a 21st-ranked 22.6 points per contest. Their run defense was atrocious despite sizable offseason efforts (Sebastian Joseph-Day, Austin Johnson) to improve up the middle. They allowed 145.8 rushing yards per game, which was the fifth-worst mark in the league. Staley’s defense continues to disappoint. Defensive run game coordinator Jay Rodgers didn’t achieve improvement and should also be evaluated.

Staley’s Chargers lack overall effectiveness both offensively and defensively. Perhaps most importantly, they lack an identity and discipline. Should the Chargers job become available, it would immediately become the top choice of potential candidates due to Herbert’s presence. Sean Payton would likely jump at the opportunity to coach Herbert. A well-respected leader like Dan Quinn could instill much-needed toughness into a flailing squad, too.

Staley was once considered one of the league’s most ascending coaching candidates. His two-year stint with the Chargers has revealed more negatives than positives, however. The Chargers should seriously consider making a change following their latest blunder.