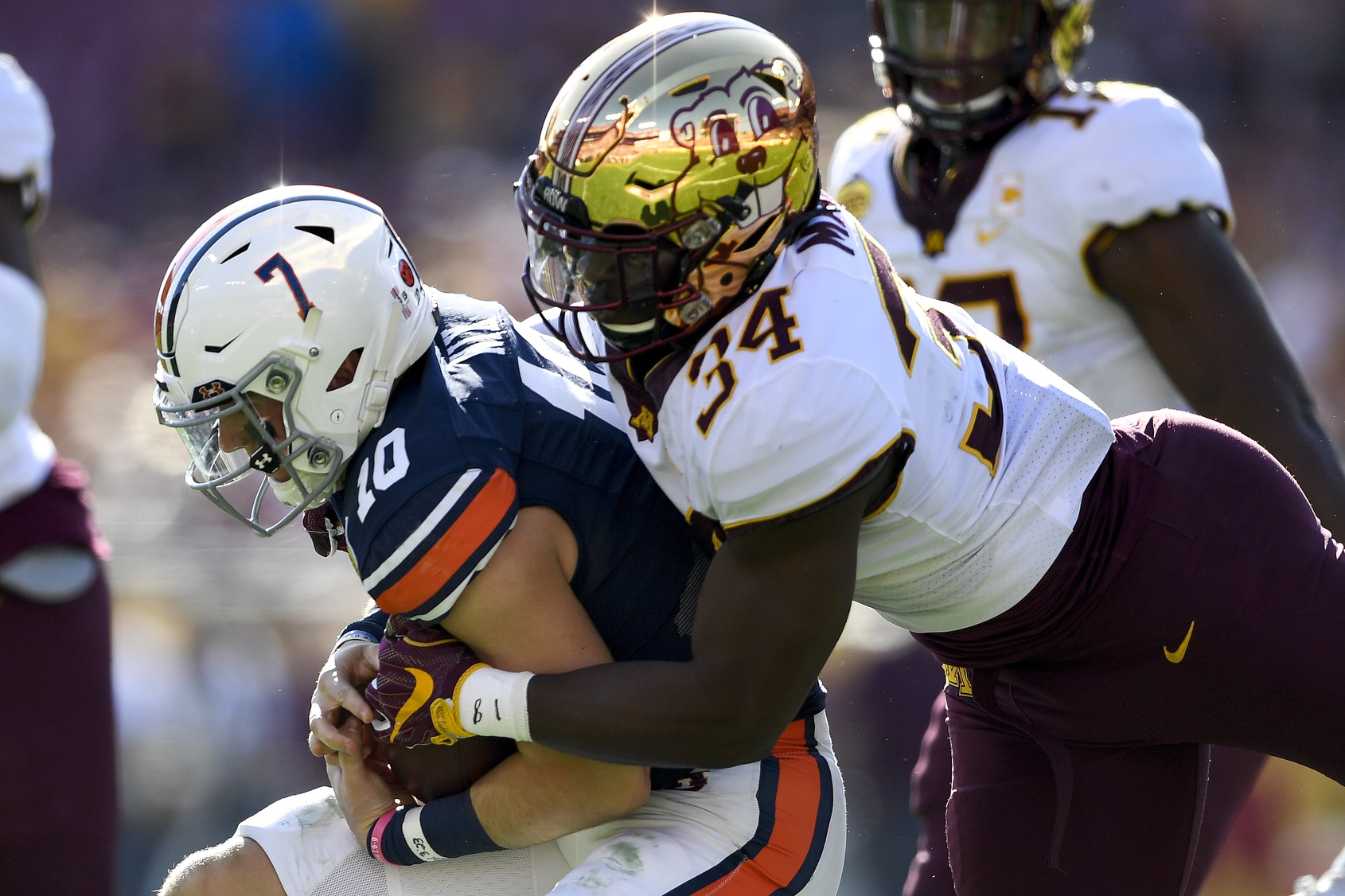 A toolsy defender who entered Senior Bowl week with a third-round evaluation from TDN scouts, there wasn’t a single player that made himself more money on Saturday than Minnesota edge threat Boye Mafe. A flat-out DUDE for all four quarters, with Saturday’s game representing the last time we had a chance to see Boye Mafe under live fire of a football game, he left a lasting impression for the slew of talent evaluators on site for the 2022 Senior Bowl. Named the National Team MVP for his multiple-sack performance, a talent that has slipped under the rug during the evaluation process due to the high-end skill set and premier depth of the EDGE class had a multitude of plays that won’t show up in the box score. A physically imposing defender from the opening kickoff, Boye Mafe flashed an array of pass-rush moves, counters, and an ability to anchor in the run game all game long. One of the “freak” athletes in college football who’s expected to jump north of 40 inches in the vertical at the NFL Scouting Combine, Mafe single-handedly made himself a substantial amount of money with his showing on Saturday afternoon. A second-team All Big-Ten selection, while the gleaming lights of the Senior Bowl were too bright for some, Mafe used the national lens to fuel his game. He was wreaking havoc within the American Team’s backfield all day long, making it tough sledding for the likes of Malik Willis, Sam Howell, and Bailey Zappe. https://twitter.com/uSTADIUM/status/1490082076183379968 Whether he was bending the edge with speed, bull-rushing with brute force, or providing a counter to the counter from opposing offensive tackles, Mafe’s deep bag of traits have him on the rise heading into the combine, pro days, and separate team workouts over the next few months. Although Michigan’s Aidan Hutchison, Oregon’s Kayvon Thibodeaux, and Purdue’s George Karlaftis have headlined the group (among others), the play of Mafe not just in today’s game but throughout the week as a clear winner in one-on-ones and team drills forces us to now to ask the question: How high can he go? While one week shouldn’t sway multiple years of work and hundreds of snaps pocketed in the depths of an evaluation process, his performance is substantial. A position in today’s NFL where both three-down impact edge defenders and rotational third-down pass rushers make up the front seven of a team’s rotation, projecting Mafe as a potential early-third or late-second-round pick could provide a team with a heck of an amount value when searching for a player with juice off the edge. Built like a tank who’s dripping with potential, while many have compared his raw ability to the likes of Baltimore Ravens 2021 first-rounder Odafe Oweh as a guy defensive line coaches would fall in love with if given the chance to work with, Mafe—who proved this week he didn’t only belong with the country’s elite talent, but will leave Mobile as one of the true winners of the event—has seen his name slide significantly up league-wide draft boards. While Saturday’s performance, in a vacuum, will be forgotten if he fails to evolve his game, it’s hard not to rave on a guy who threw around 6-foot-6 tackles like they were a ragdoll for 60 minutes in any way he deemed fit. A week that had risers and fallers, Saturday was the climax of what was an awfully impressive week for the 6-foot-3 Mafe. An already deep edge class with varying skill sets to fit any type of defensive front, his emergence as a player to be reckoned with over these next few months has thrown a name into the fire teams will have circled during the pre-draft circuit.