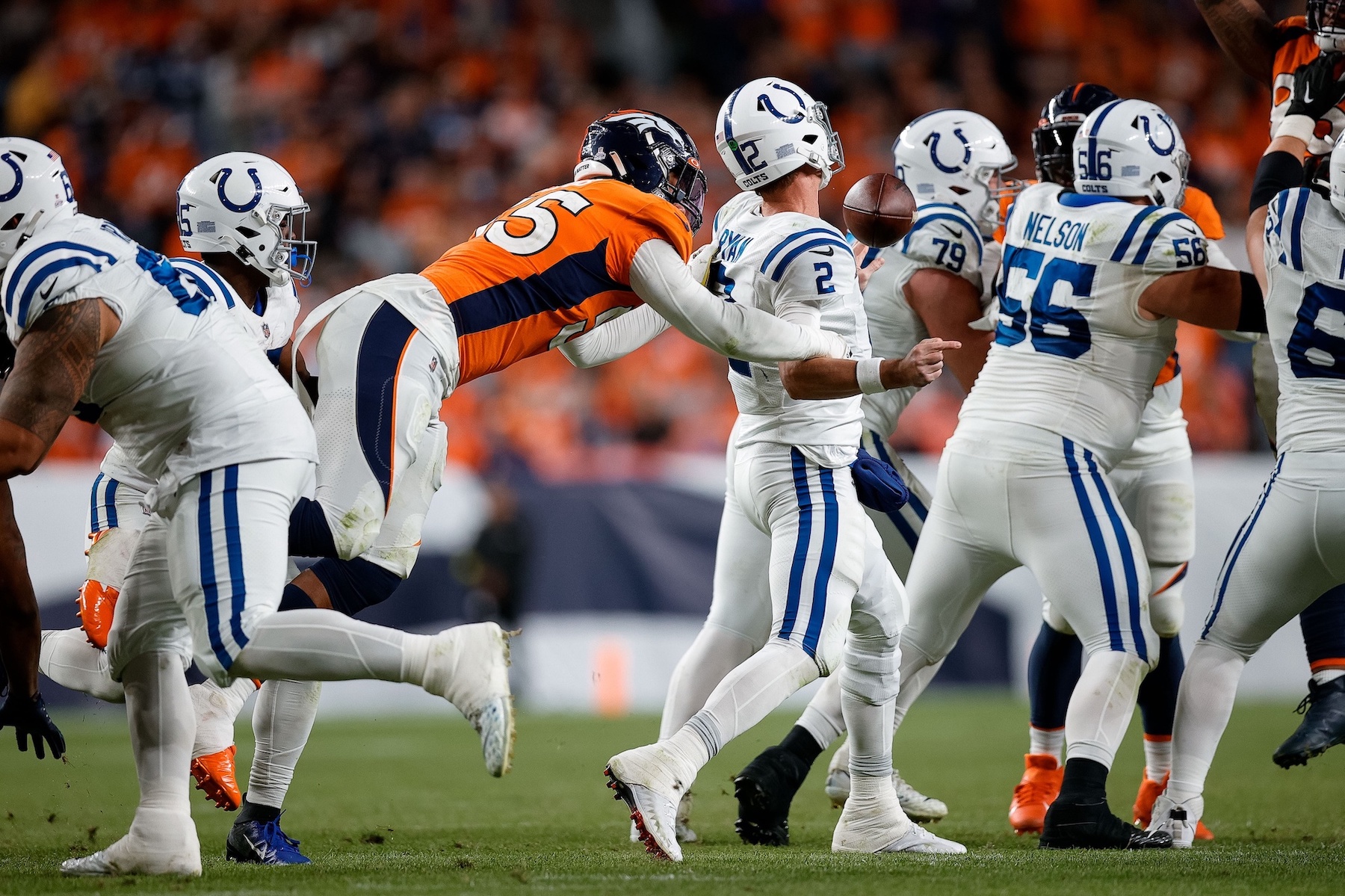 Bernhard Raimann Isn’t Ready To Be A Starter

The Indianapolis Colts made several changes across their underwhelming offensive line ahead of Thursday’s primetime showdown against the Denver Broncos. The Colts managed to secure an ugly 12-9 victory in overtime, but the offensive line continued to struggle mightily. Part of the changes saw rookie left tackle Bernhard Raimann earn his first career start. Raimann put forth a nightmarish performance. Raimann isn’t quite ready for regular NFL action.

Raimann was whistled for four first-half penalties—three of them were clear holding infractions. The raw and inexperienced Raimann was schooled by Broncos sophomore pass rusher Baron Browning with consistency. Colts head coach Frank Reich was right to attempt change given Indianapolis’ horrid offensive line, but Raimann proved he isn’t capable of providing an immediate solution to Indianapolis’ offensive woes.

Raimann wasn’t the only change. Braden Smith moved from right tackle to right guard. Matt Pryor moved from left tackle to right tackle. The shuffle sent starting right guard Danny Pinter to the bench, but this new-look combination of offensive linemen proved no more effective. Raimann wasn’t the only Colts O-lineman to struggle. Pryor allowed nine quarterback pressures, per Pro Football Focus. That represents the most pressures any starting offensive lineman has allowed this season. Starting quarterback Matt Ryan was sacked on six occasions. The Colts entered the game ranked 27th in ESPN’s pass block win rate metric and it’s difficult to imagine they will improve much after Week 5.

The No. 77 overall selection in the 2022 NFL Draft, the pre-draft report on Raimann indicated he required time to develop on the bench. Raimann began playing football as a teenager in Steinbrunn, Austria, eventually landing a spot with local-based football club Vienna Vikings. Raimann made his way to America as a 230-pound tight end for Central Michigan before making the transition to offensive tackle. Indianapolis’ struggles have catapulted Raimann to a starting spot, but Thursday’s showing may swiftly send Raimann back to being a reserve.

Raimann is blameless in all this. He should have been afforded the time necessary to continue acclimating to the pro ranks given the uncommon road he embarked on to a professional football career. Colts general manager Chris Ballard is culpable for mismanaging the left tackle position this offseason. Ballard allowed bridge-option Eric Fisher to reach free agency and decided to trust in-house candidate Pryor to man the blindside. Pryor has been truly putrid, and the Colts arrived at Raimann while scrambling for in-season solutions. Ryan is a statue in the pocket and the Colts needed to take the left tackle position more seriously this offseason. It should have never reached a state that forced them to rely on a third-round international rookie.

The 2-2-1 Colts are a sham. Bernhard Raimann is being treated unfairly due to general managerial malpractice. Ballard deserves criticism, not Raimann.