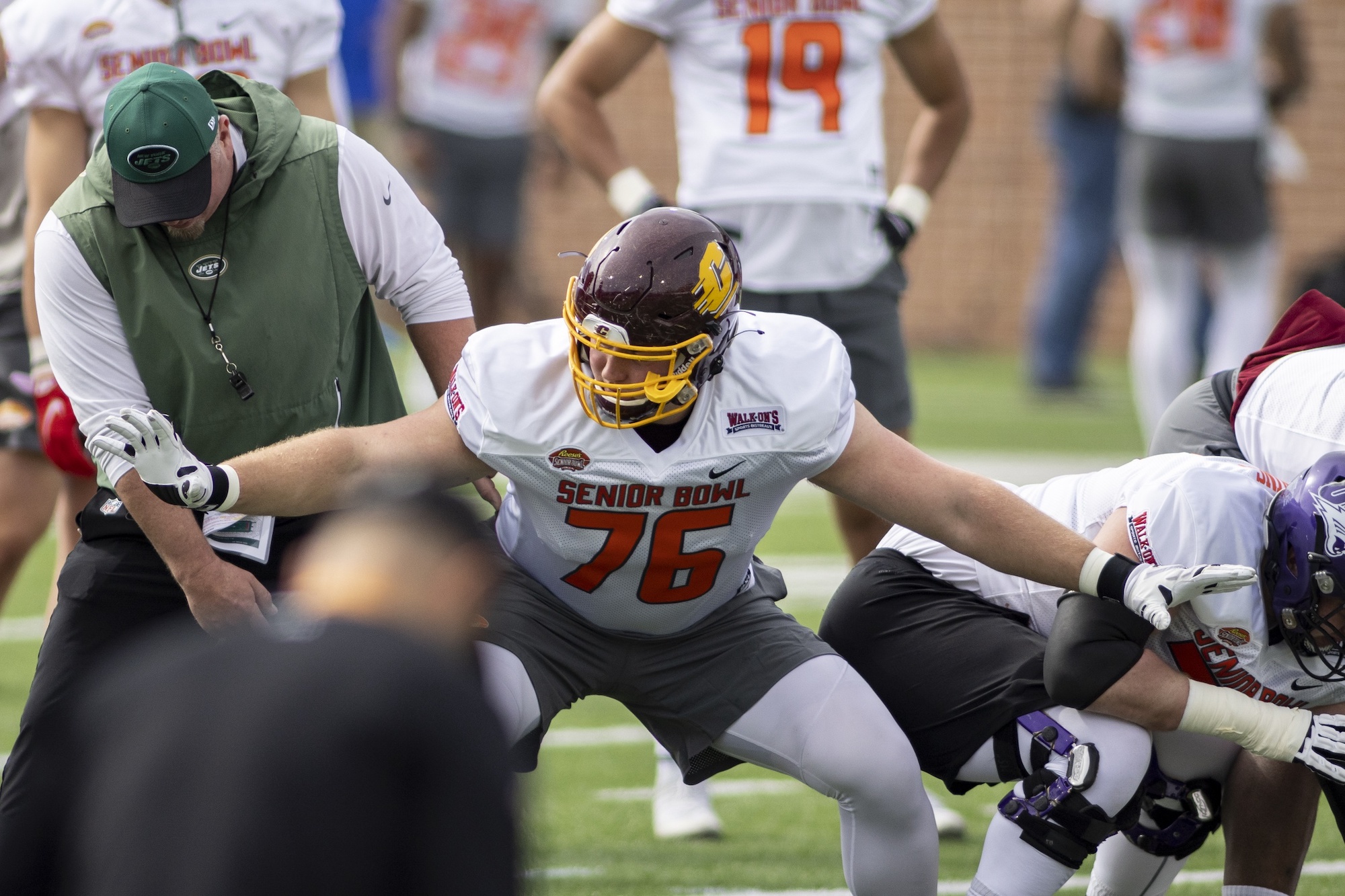 Is Bernhard Raimann A Good Fit For Bears?

The Chicago Bears don’t have a first-round pick in April’s 2022 NFL Draft after trading up with the New York Giants for quarterback Justin Fields in 2021. It was a smart move by the Bears at the time, and it’s aged equally well. The likely picks in the top 10 of this year’s draft—Chicago would’ve held the No. 7 overall pick—are comprised of good, not elite prospects. Sure, the Bears would’ve been in striking distance for a quality edge rusher or cornerback, but no prospect in this year’s class offers the franchise-changing impact that Fields continues to. That turns our attention to the second round, where Chicago owns the 39th overall pick. Sure, they could trade back in an attempt to add more picks to general manager Ryan Poles' arsenal, but assuming they don’t, the Bears have a chance to land a starting-quality player with their first pick. According to the latest mock draft from TDN scout Drae Harris, that potential starter is Central Michigan offensive tackle, Bernhard Raimann. It’s an interesting projection by Harris and one of the first that I’ve seen that has Raimann as a target for the Bears. I have Raimann slotted more as a late-second-round pick than a guy who’ll come off the board in the first 10 selections of day two, but that’s splitting hairs. At the end of the day, Raimann presents as a high-upside prospect whose athletic background as a wrestler and tight end will appeal to teams who view him as a discounted version of Lane Johnson. Raimann has to add some weight to his 6-foot-6 frame (he checked in at 304 pounds at the 2022 Senior Bowl), and some growing pains should be expected when he enters the NFL next season because of his inexperience playing offensive line. But if he continues at his rate of development during the 2020 and 2021 seasons, it’s fair to project him as a quality starter by the second or third year of his career. But therein lies the problem, doesn’t it? The Bears need a starter for next season—whether it’s an offensive lineman, wide receiver, or defensive back—to come from that 39th pick. And if they use it on Raimann, it’s a bit unclear whether he’ll be ready to step in and play right away. As TDN’s Kyle Crabbs noted in Raimann’s player evaluation:

The three-year projection is undoubtedly higher than the one-year projection and in a perfect world, he may get a little seasoning on the bench before taking the field. But with his position and his likely projected draft status, I would not be surprised if Raimann was handed a starting role early on and charged with learning on the job.

NFL free agency will kick off in about two weeks, and the flurry of transactions over the first 48-72 hours will change much of what we’re projecting to happen in the first and second rounds of the 2022 NFL Draft. This includes the Bears’ strategy at No. 39 overall. If they land a free agent like Terron Armstead, they won’t draft an offensive tackle… at all. If, instead, they sign D.J. Chark? Then betting on an offensive lineman being their first selection is a smart wager. For now, mock drafts like Harris’ help shed light on prospects like Raimann, who’d make sense for the Bears if they approach the 2022 NFL Draft with an eye toward landing a starter for 2023 and beyond.