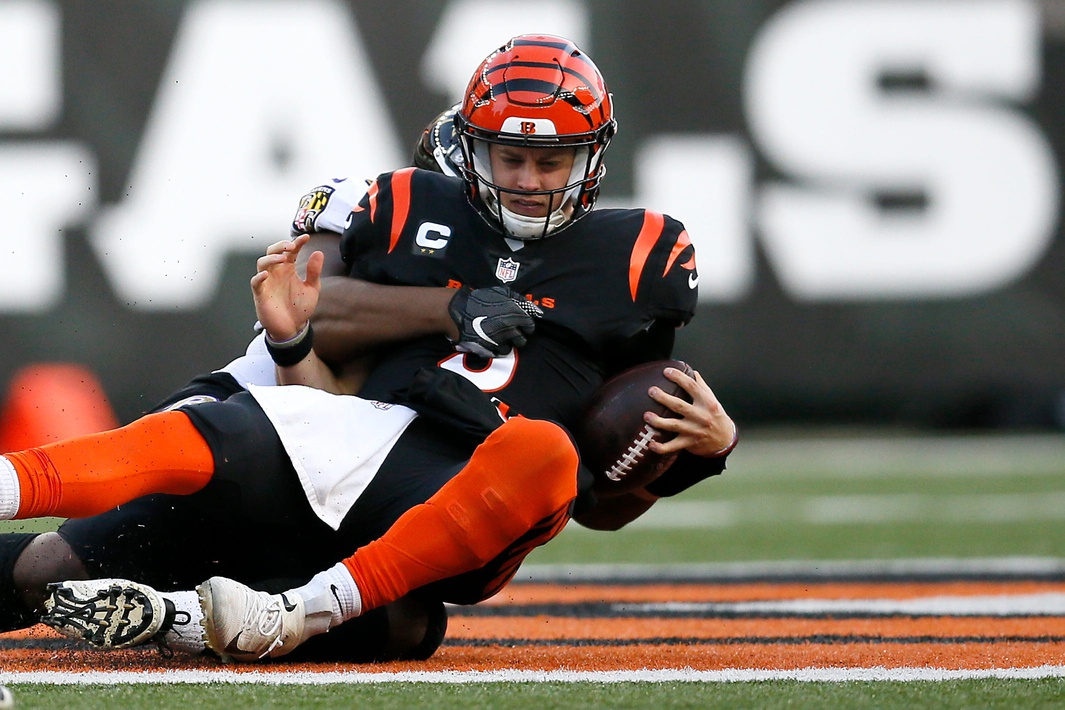 The impending 2022 NFL season welcomes a new opportunity for all 32 franchises. That sentiment rings especially true for teams that missed the postseason in 2021. Last year’s division winners enter the new campaign with a bullseye on their back as their inner-division contenders aim to narrow the gap. When closely analyzing last year’s first-place finishers, the Cincinnati Bengals are the reigning division champions that could find themselves in danger of missing the postseason altogether in 2022.

The Bengals experienced a dreamlike campaign on the back of a breakout season by sophomore quarterback Joe Burrow. The Bengals unexpectedly qualified for Super Bowl LVI and now return in 2022 with the weight of newfound expectations on their shoulders. It will be interesting to monitor how head coach Zac Taylor prepares his team to handle expectations for the first time in his tenure. Bengals General Manager Duke Tobin has spent the offseason retooling his offensive line, which was a clear area of weakness throughout the 2021 campaign. Acquiring the likes of Alex Cappa, La’El Collins and Ted Karras should lead to the desired improvement.

We don’t have any particular issues with the way the Bengals have gone about improving their roster this offseason. This prediction has little to do with the state of the Bengals themselves and more to do with the overall competition level in the AFC North, and a new-look, fully-loaded AFC in general. Somewhat lost in the shuffle of Cincinnati’s run to Super Bowl LVI is the fact they went 10-7 last season. The division was essentially decided by a single contest and remained tight the entire way. The second-place Pittsburgh Steelers finished 9-7-1 and both the Cleveland Browns and Baltimore Ravens finished within two wins of matching Cincinnati’s win totals by winning a respectable eight contests.

Of the three contenders, the Steelers possess the most concerning outlook despite finishing second a year ago. Starting quarterback Ben Roethlisberger has retired (not that he was effective last season) and a new question mark has revealed itself at quarterback as the Steelers prepare to usher forward with Mitchell Trubisky and Kenny Pickett. The ever-steadying presence of head coach Mike Tomlin should keep the Steelers above water regardless. The Steelers have never finished below .500 throughout Tomlin’s illustrious 15-year coaching career. It’s an astounding statistic that should continue in 2022.

The Cleveland Browns could pose the biggest threat to Cincinnati’s divisional throne. Browns General Manager Andrew Berry signaled his dissatisfaction with Cleveland’s inability to qualify for the playoffs in 2021 by executing a shocking blockbuster trade for quarterback Deshaun Watson. Watson represents a significant upgrade over Baker Mayfield and could immediately place the Browns in Super Bowl contention. The fellow offseason acquisition of wide receiver Amari Cooper immediately provides Watson with a dominant boundary receiver.

The two-headed monster of Nick Chubb and Kareem Hunt remains in place, as does a solid defense that possesses arguably the best pass rusher in the league in Myles Garrett. The Browns just re-signed Jadeveon Clowney as well, who gained a second lease on life after playing alongside Garrett last season.

A potential lengthy suspension for Watson hangs over the Browns’ 2022 prospects like a dark cloud, as the league continues to investigate his off-field behavior. But until that happens, it’s safe to view the Browns as a legitimate contender.

And that finally brings us to the Ravens. John Harbaugh‘s team managed to capture eight victories last season despite dealing with an abundance of injury-related adversity. The Ravens somehow lost J.K. Dobbins, Marcus Peters, and Gus Edwards for the entire regular season before Week 1 marked its arrival. Superstar quarterback Lamar Jackson also missed five games, the majority of which occurred down the stretch. All of these talents are healthy and ready for 2022 and general manager Eric DeCosta has done a fantastic job adding quality talent to the roster this offseason.

Arguably the worst secondary in the league last season has received massive upgrades in the form of Marcus Williams and Kyle Hamilton. The right tackle position was upgraded by signing Morgan Moses. The loss of Marquise “Hollywood” Brown qualifies as somewhat concerning for Jackson’s prospects as a passer, but the Ravens seem prepared to abandon efforts to field a more balanced offense in favor of returning to the heavy tight end sets that Jackson ran so effortlessly throughout his 2019 MVP season (DeCosta just drafted two tight ends in Isaiah Likely and Charlie Kolar). The Ravens have qualified for the playoffs in three of their last four attempts, and an appropriate return to form appears on the horizon.

Predicting the Bengals to miss the postseason may qualify as a bold prophecy for some given their 2021 success. We certainly considered featuring the Tennessee Titans or Dallas Cowboys here, both of whom experienced disappointing offseasons, but they play in significantly weaker divisions so it’s a tad more difficult to forecast their downfall. Predicting who may qualify for the wild card is an impossible task given the overall depth the conference now features.

The AFC North currently holds the appearance of being one of the more competitive divisions in 2022. All four contending teams have realistic paths to capturing 10-plus victories. The Browns and Ravens particularly loaded up for battle. The division certainly complicates matters to a notable extent, and that places the Bengals in danger of missing the playoffs.