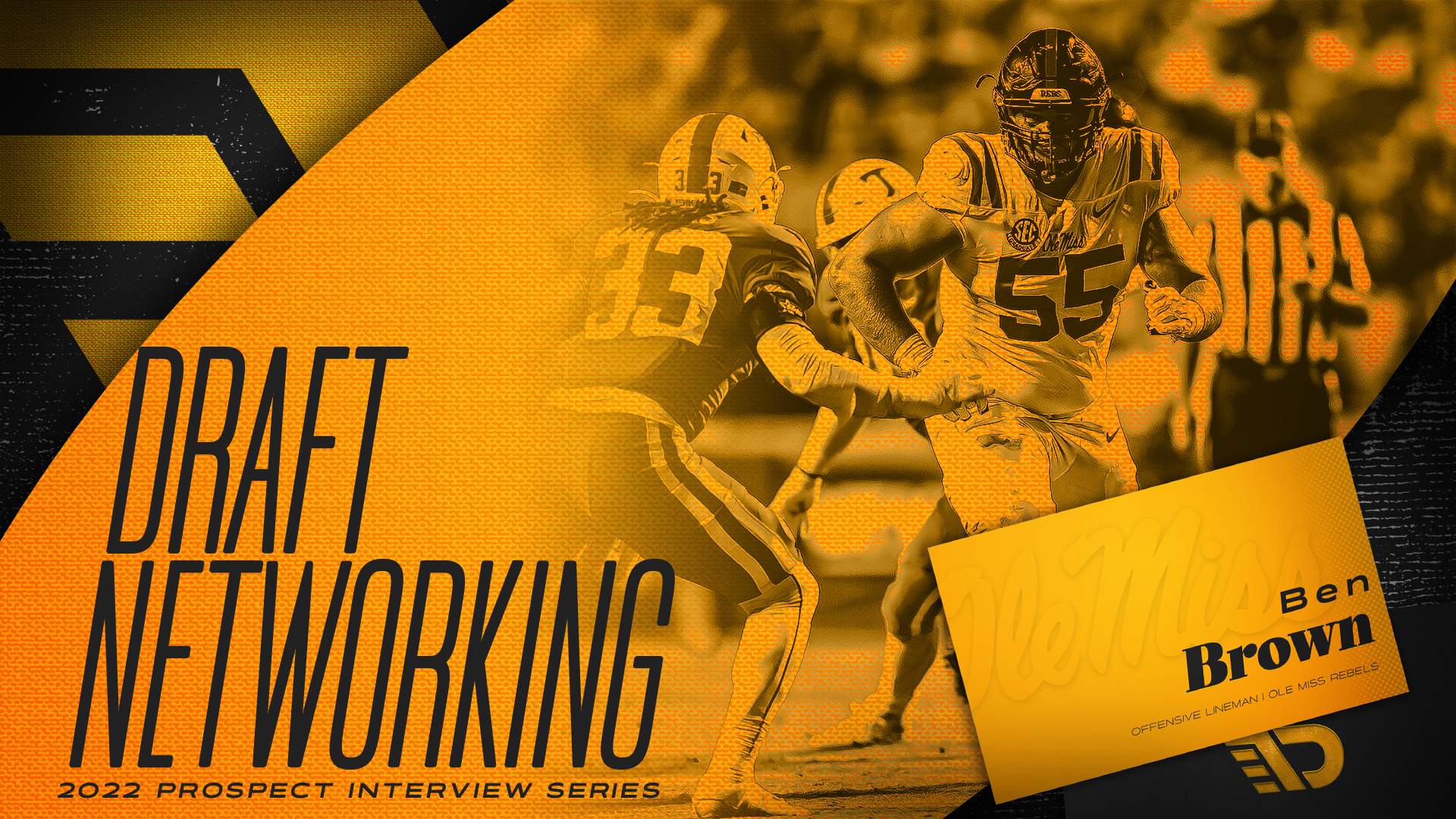 NFL teams often desire versatility and durability across the offensive line. It should make Ole Miss’ Ben Brown a hot commodity in the 2022 NFL Draft.

A four-year starter in college football’s toughest conference with experience starting at several positions across the interior, Brown is a good-sized prospect that understands how to use length and strength to stifle his opponents.

Brown recently spoke exclusively with The Draft Network regarding his illustrious career for the Ole Miss Rebels, his NFL Scouting Combine experience, his positional flexibility, which positions he sees himself playing at the next level, and so much more.

JM: You leave Ole Miss as a four-year starter. How did your experiences for the Rebels help prepare you for the next level?

BB: I think my experiences as an Ole Miss Rebel thoroughly prepared me for what’s to come. I started four years as you said, and I was able to make 40 consecutive starts throughout that timeframe. I have vast experience at two different positions, one being at right guard, and the other being at center. I think all of those experiences are going to help me out a bunch.

I’ve played a lot of football against some really good players. I’ve played the highest level of amateur football imaginable in the SEC. I’ve had a lot of experience and I’m an extremely versatile player that can play multiple positions. I feel very prepared.

JM: As you should, those experiences are going to take you a long way. You played both guard and center throughout your time there, as you said. What are the main differences between the two positions?

BB: As a center, especially having played that position in Lane Kiffin’s and Jeff Lebby’s high-tempo offense, you’re really running the show as their center. That can be said about the NFL level as well where the center is so critical to the overall effectiveness of the offense. You’re in charge of the entire offensive line. You really have to make sure that everyone is on the exact same page. You have to identify the MIKE and things of that nature. You have to make certain calls in passing situations and on third downs. That’s one major difference between center and guard.

As for another difference, playing center means you’re having contact a lot quicker than any of the other offensive line positions. At center, the defensive tackle will be crowding the ball right in front of you. If you’re at guard, you’re lined up a bit more off the ball when compared to center. Contact happens a little bit quicker at center than it does at guard. I love playing both of those positions.

JM: I love how thorough your thought process is. Through your conversations with NFL teams throughout this process, where do most teams see you playing at the next level?

BB: Most of the teams I’ve spoken with strictly see me as an interior offensive lineman. That’s about as specific as it gets. Some teams see me strictly playing center, whereas others see me at guard. Obviously, my added versatility opens up avenues at both positions. My NFL team will have an option to utilize me in multiple spots. It really depends on the team and their offense. Teams are looking at me as an interior player.

JM: That makes sense. Do you feel your game is more advanced as a run blocker, or in pass protection?

BB: I’d say early in my career, I was a bit more developed in pass protection. As I matured more and developed in an SEC weight room and strength training program, I feel like my ability as a run blocker began to blossom more and more. I’d say overall, I’m a very balanced player today. I maybe didn’t start that way, but my experiences have really helped me develop an overall skill set. I feel comfortable in my abilities both as a run blocker, and in pass protection.

JM: That’s terrific. Playing in that offense, you touched on Lane Kiffin and Jeff Lebby. How did playing in their offenses help get you ready?

BB: It really opens your eyes to how complex an offense can be (laughs). I had to learn various different schemes and plays. We had various wrinkles within our playbook and formations. Small things led to us changing plays altogether. We could change our pace or approach based on what our weekly game schedule looked like. Game prepping was always a different experience under Kiffin and Lebby. We might add a wrinkle to one of our zone running plays for our upcoming opponent.

That’s how complex and fluid our offense was. We’d make those changes for a single week or game. It was specific to our opponents. We saw we wanted to attack on tape. We’d identify their weakest points and plan to attack it. With coach Kiffin and coach Lebby, I’ll say this, their offense really helped open up my mind to various different schemes and different ways of blocking.

JM: That’s a terrific in-depth look on how that offense operated on a weekly basis. We’ve talked about you being a four-year starter. You made 40 consecutive starts as you said. You’ve been so durable. Unfortunately, you suffered a torn bicep injury in October which kept you from physically participating at the combine. Where are you at from a health perspective right now?

BB: I feel very, very good right now. I’m currently in the last stage of my recovery, which is just about getting strength back in my arm. I feel great physically. I feel like I’m in shape right now, I’m conditioned. I’m moving around well. I actually moved around some for scouts during our Pro Day. I wasn’t quite ready to strike a bag at that point but I’m striking bags now. I’m up and moving around more and more. I feel great right now.

JM: That’s terrific news and we love hearing that. I’ve really appreciated your time today. Why should a team use one of their draft picks on Ben Brown?

BB: I think an NFL team should draft me because they’re going to get a determined offensive lineman. I’m a hard-working player that’s all in for my team. I’ll do whatever it takes to help the team win a Super Bowl. That’s what I want to achieve throughout my professional career at the next level.