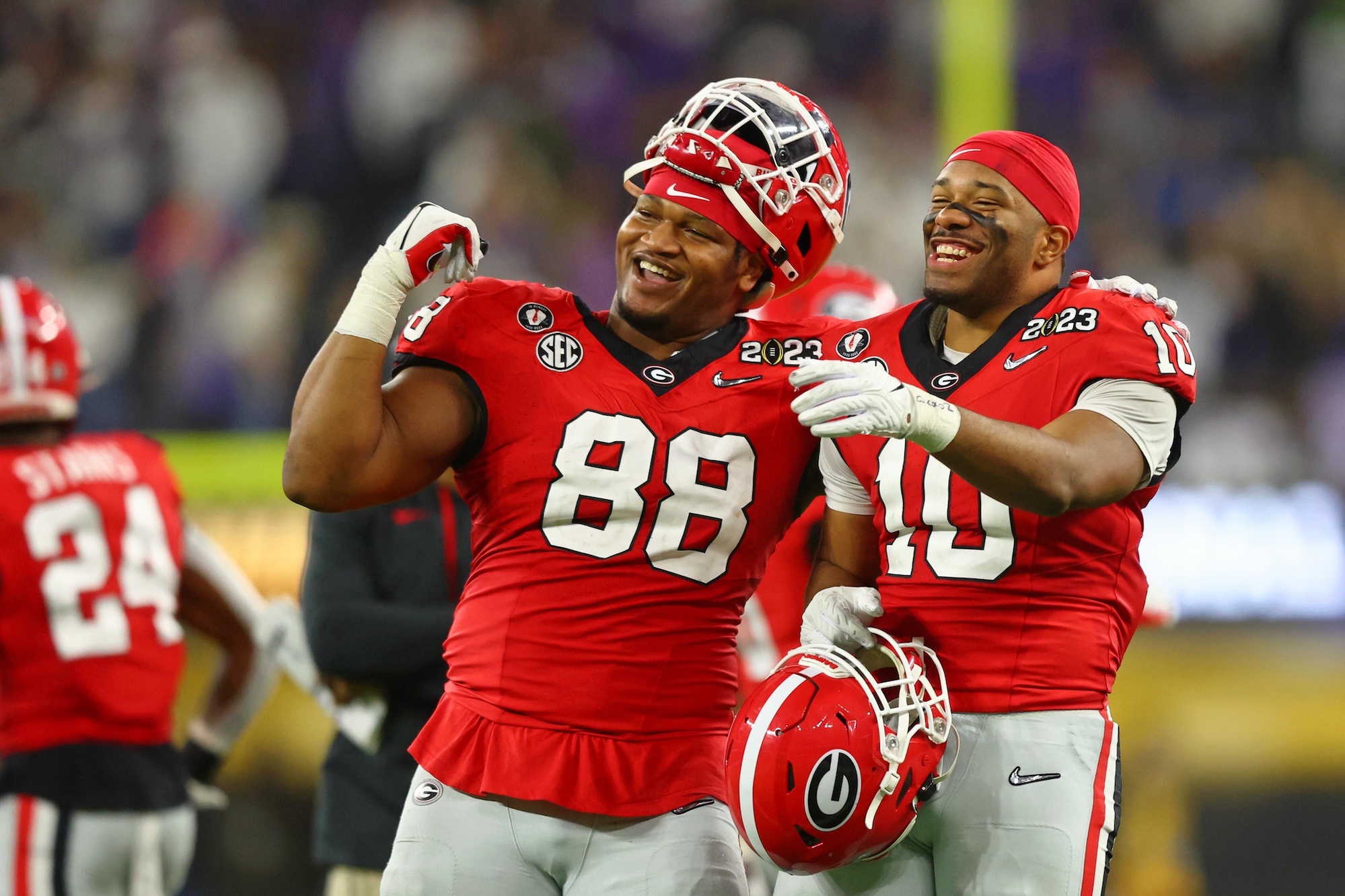 According to owners, general managers, and head coaches, their professional football teams don’t try to tank for better draft picks. However, if a team was going to try to tank, the way the Chicago Bears did it was perfect. They found out what they have in their supremely athletic second-year quarterback by building an offense around his traits… and then lost just about every game down the stretch for the premium draft capital that allows them to build around said quarterback. Now they hold the No. 1 overall pick in the 2023 NFL Draft, which they can either use as trade bait or as a chance to reboot their franchise’s rebuild.

With more than three months to go until the draft, the valuations of so many prospects could change with the college all-star games and NFL Scouting Combine still ahead. Even team needs might look different by the time the draft rolls around thanks to free-agent signings. But if the draft happened right now and I were the general manager of the Bears, this is how things would go in Chicago.

With the fourth overall pick, the Bears start to rebuild the interior of their defensive line. Assuming Will Anderson Jr. came off the board one pick earlier, Chicago gets the best consolation prize: an elite interior defender that not only may be arguably the best prospect in this class but one that fills a massive hole in their roster. Jalen Carter would add a level of disruption and (controlled) chaos to a Bears front seven that has been missing that in recent years.

The Bears may have given up their second-round pick for a wide receiver weapon in Chase Claypool, but it was a move that was more than a little underwhelming. Quarterback Justin Fields needs some better weapons around him in a big way if the Bears want to have any kind of firepower in the passing game.

Josh Downs has thrived as a No. 1 option for North Carolina in his last two seasons, putting up more than 1,000 yards and eight touchdowns in back-to-back years. With excellent athleticism and high yards-after-catch potential, the Bears would get a guy that can bring their passing offense up to another level.

Round 2 (No. 56 overall, via BAL): Felix Anudike-Uzomah EDGE, Kansas State

Along with help on the interior defensive line, the Bears need some major help on the edge. Trevis Gipson was solid stepping up as a starter after his team traded away Robert Quinn, but fifth-round rookie Dominique Robinson didn’t move the needle much after the season opener.

Felix Anudike-Uzomah is still a bit raw, but his explosiveness provides him tons of upside as both a pass-rusher and run-defender. For a team that was dead last in the league in team sacks with 20, getting an explosive athlete to help rush the passer would be a huge upgrade to the defensive front.

Let’s keep this simple: Fields was tied with Russell Wilson as the most sacked quarterback in football this year, taking 55 of them in 15 games. That’s an average of nearly four sacks taken per game even as Fields magically seems to escape what looks like a sure sack once a game. The best way to keep the quarterback upright and healthy is to improve the offensive line in front of him.

Matthew Bergeron has tons of experience at both left and right tackle but could transition to guard at the next level. For a team that needs help just about everywhere on the offensive line, Bergeron could slot in almost anywhere the Bears see fit as they develop a prospect that’s still a bit raw and undersized into a big help up front for their quarterback.

A 6-foot-4, 220-pound, violent tackler at the linebacker position, Overshown has all of the physical traits to be an impressive defender at the next level. Thanks to his size, speed, and physicality, he has everything it takes to be solid in run defense, but Overshown has also shown some upside as a pass defender as well in both man and zone coverage. He’s a super toolsy athlete with plenty of upside at the position, and with Roquan Smith sticking around in Baltimore, the Bears wouldn’t have to mourn that loss too long if Overshown plays close to his ceiling.

Round 4 (No. 106 overall, via IND): Olusegun Oluwatimi OC, Michigan

The Bears got an upgrade at tackle with their third-round pick, but now they get some extra help on the interior. Oluwatimi has played as a starting center for three years, including two at the University of Virginia. This year, he started at Michigan as a graduate transfer and won the Rimington Trophy, an award given to the best center in college football. Oluwatimi’s experience and lack of injury trouble over his three years as a starting center are sure to help the Bears’ mission to keep Fields upright more often going into 2023.

The Bears likely will lose starting running back David Montgomery to free agency this offseason. While Khalil Herbert has been solid in his second year, it never hurts to add extra depth, especially to a run-first offense.

Zach Evans is an explosive runner with good vision and tons of big-play ability. He has clear upside at the next level as a first- and second-down back but also runs with a physicality that plays well in short-yardage and goal-line situations.

Chicago may have just added some young guys to their defensive secondary in last year’s draft with Jaquan Brisker and Kyler Gordon, but they could still use some help at cornerback. Deonte Banks recorded 38 tackles, eight pass deflections, and an interception this year en route to an All-Big-Ten honorable mention. He’s a fluid mover with a high football IQ, though he lacks the top-end speed teams might have hoped for. Still, grabbing a high-upside cornerback in the fifth round would be a solid move.

Shall we double-dip at the receiver position? I’ll say it before and will say it again: Fields needs more weapons to throw to in the passing game. Equanimeous St. Brown had a nice year, but he couldn’t stick on the Packers’ roster his first four years in the league and doesn’t have a high ceiling as he gets older.

Jayden Reed, along with Downs, gives Fields an extra weapon in the passing game. He can play on the outside or in the slot and has good initial quickness to get open. Once the ball is in Reed’s hands, like Downs, he has the yards-after-catch potential to break open a big play.

Earlier in this hypothetical draft, the Bears got a new tackle and a new center. Here in the seventh round, they move to further upgrade the interior of their offensive line with a guard.

Caleb Chandler is athletic enough to work to the second level and make his blocks in the run game. In the passing game, Chandler’s short-area quickness and good reaction speed keep him on the winning side of the battle in the trenches long enough to give his quarterback time to get the ball out.