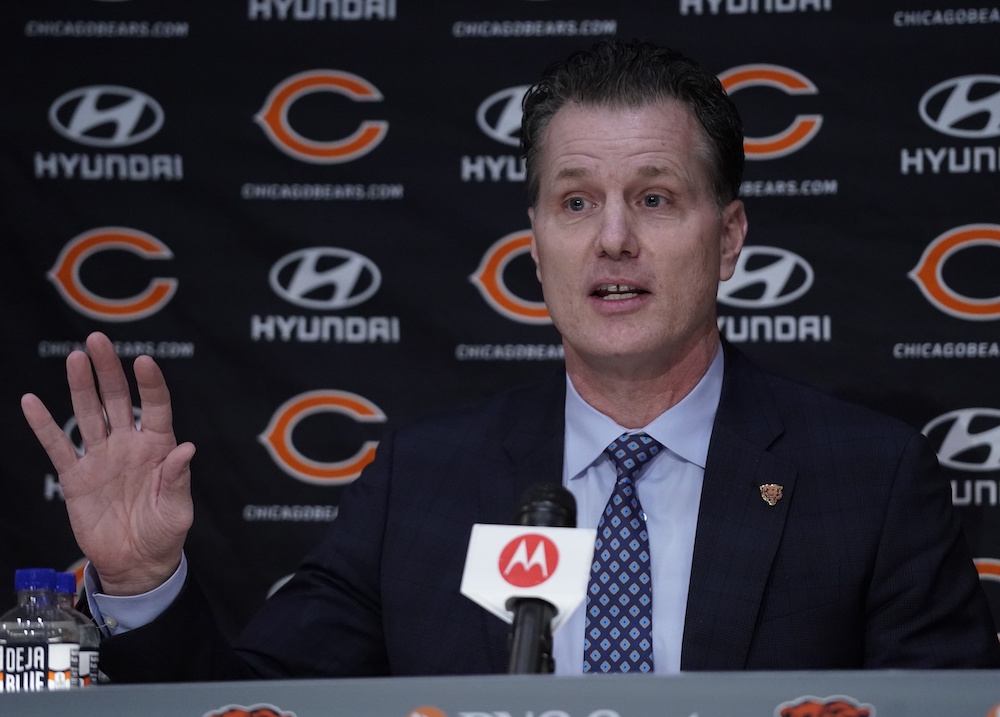 The 2022 NFL draft runs deep with talent and it’s the most appealing aspect of this year’s draft class, considering there isn’t a slam dunk cluster of elite players at the top of the first round. For teams like the Chicago Bears that don’t have a first-round pick, that depth will spill into the second round, where impact starters can still be had.

Bears Head Coach Matt Eberflus appeared on The Cris Collinsworth’s podcast this week and said Chicago expects to land three starters with their picks in the second and third rounds because of that depth.

“What’s nice about this draft is that it’s deep,” Eberflus said. “It’s deep just because of the whole COVID thing; guys stayed in [college] another year. We feel that it’s a good draft to have where we are: 39, 48, 71. We feel pretty good we’re going to pick up three starters there or have potentially three starters based on the development of those players. So, we feel real good about it.”

You know the deal by now. The Bears’ most pressing needs are at wide receiver, interior offensive line and in the defensive backfield. Chicago should be able to land starting-quality prospects in two of those three areas at picks 39 and 48, and No. 71 has a chance to produce a starter at wide receiver if the Bears decide to wait an extra round before swinging on a pass-catcher.

According to TDN’s current 2022 NFL Draft rankings, a player like Boise State wide receiver Khalil Shakir – who ranks 72nd overall – could be on the board when the Bears are on the clock in the third round. He’s the kind of talent Eberflus alluded to; he can start right away as a rookie and would be incredible value on day two.

The NFL Draft is always more fun when your favorite team has a first-round pick, and for Bears fans, the first night of the 2022 NFL Draft will be anti-climactic, barring an unexpected trade into the first round. But if recent history indicates what matters most to this team, it’s the picks that occur after the first 32 that have the most meaning.

If we put 2021’s first-round pick Justin Fields in his own bucket, the Bears haven’t had much luck with first-rounders. In fact, they didn’t have any in 2019 and 2020 following the Khalil Mack trade, and their stretch of first-round players from 2015 to 2017 included wide receiver Kevin White, edge rusher Leonard Floyd, and quarterback Mitch Trubisky. All three were busts in Chicago. The best, most recent, first-round player is linebacker Roquan Smith, but he’s one first-round pick in the last six non-Fields first rounds that positively impacted the team.

Maybe the Bears’ failures in the first round are why they’ve only been to the playoffs twice in the last eleven years. Perhaps former General Manager Ryan Pace did more harm than good by trading two first-round picks for Mack at the start of the 2018 season. But none of that matters in 2022, the first year with Eberflus and General Manager Ryan Poles at the wheel. Fortunately for Chicago’s most important power players, this year’s draft will give them a chance to impact the roster even without a first-round pick in their arsenal.

It’s something of a best-case scenario for Poles and Eberflus. While expectations remain high for the draft, there isn’t nearly as much pressure as what comes along with making a first-round pick. Team draft classes are often judged by whether a first-rounder becomes a star. Hits on days two and three are icing on the cake; a bonus prize. It’s a foolish way to judge a general manager’s performance, but it’s the nature of the beast. In his first draft on the job, Poles won’t face that beast.

This isn’t to suggest there’s no pressure on the Bears. Eberflus set the bar high; he’s expecting the Bears to land three starters this month. That’s a tall order to fill and one that usually doesn’t happen. It doesn’t mean it’s impossible, however.

The 2020 NFL Draft produced two Bears starters in the second round: cornerback Jaylon Johnson and tight end Cole Kmet. Chicago didn’t have another pick that year until the fifth round. The Bears landed running back David Montgomery in the third round of the 2019 draft (their first selection in that draft); it didn’t take long before he ascended to the top of the depth chart. Guard James Daniels and wide receiver Anthony Miller were a pair of second-rounders in 2018. Despite Miller’s bizarre career path, both draft picks were key contributors in their first seasons. None of those draft classes were as deep as this year’s, so it’s reasonable to be optimistic about the Bears’ potential draft haul.

It’s obvious that the 2022 NFL Draft is, and has been, a huge variable in the Bears’ offseason plan. Chicago hasn’t been as active in free agency as many expected. They haven’t added big-name upgrades around Fields or opened the checkbook for a star player on defense. Instead, Poles has been calculated and targeted with his moves, and it makes more sense now.

The Bears are banking on the NFL Draft to produce those upgrades – three instant starters – in 2022. The best teams build through the draft, and it’s what Chicago is hinging their immediate and long-term outlook on this year.