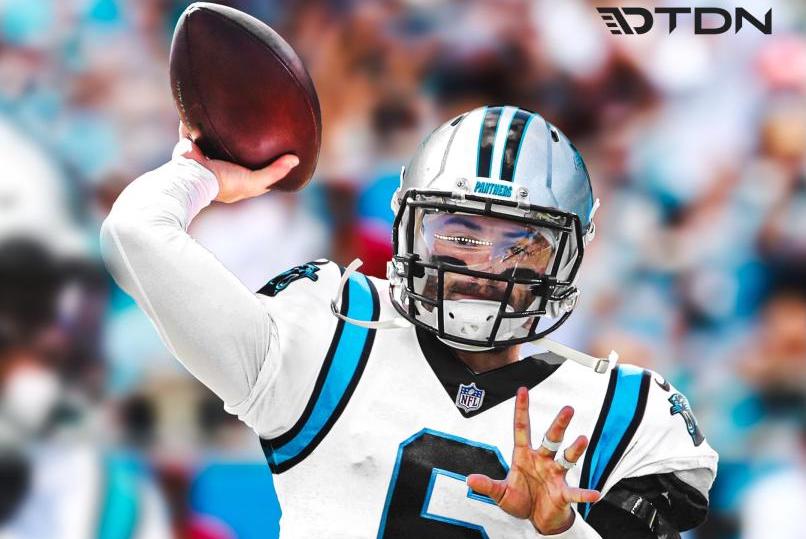 Baker Mayfield Trade Is A Win-Win For Panthers, Browns

It finally happened. According to multiple reports, the Carolina Panthers have acquired disgruntled Cleveland Browns quarterback Baker Mayfield in exchange for a 2024 conditional fifth-round selection that can convert to a fourth-round pick should Mayfield reach certain playing-time incentives. Mayfield’s broken relationship with the Browns has finally reached its appropriate conclusion.

The deal represents a quality trade for a Panthers squad that just upgraded their quarterback position at a low cost. It also provides Mayfield with a much-needed fresh start while ridding the Browns of an unnecessary distraction. It’s a win for all parties involved.

Mayfield was seemingly expected to become a Panther, but the two sides continued to work through some difficult financial-related details. The Panthers are already paying quarterback Sam Darnold a fully-guaranteed $18.858 million in 2022 following their ill-advised decision to exercise his fifth-year option. Mayfield was set to carry an exact cap hit and salary of $18.858 million via the same fifth-year player option. Reports indicate the Browns agreed to pay $10.5 million of Mayfield’s 2022 salary in order to help facilitate the trade. Mayfield agreed to trim approximately $3.5 million of his base salary, which he could earn back via incentives, and the Panthers will pay Mayfield under $5 million (pending incentives) as a result.

Although Mayfield joins a crowded quarterback room that features Darnold, rookie Matt Corral, and P.J. Walker, Mayfield is expected to immediately step into Carolina’s starting role under center, even if the Panthers will present this as a training camp competition between Darnold and Mayfield. The reality is the Panthers don’t work tirelessly to acquire Mayfield if they’re satisfied with what Darnold brought to the table last season. The former USC standout completed just 59.9% of his passing attempts while throwing more interceptions (13) than touchdowns (nine) in 12 regular-season appearances as a Panther (a shoulder injury temporarily sidelined him).

Mayfield is joining a Panthers squad that actually has several quality offensive weapons in place. Superstar receiver D.J. Moore may be one of the game’s most underrated boundary targets. Moore has often made the best out of Carolina’s less-than-desirable quarterback situation in recent years, having totaled 1,000-plus receiving yards in three consecutive seasons while playing alongside Teddy Bridgewater, Darnold, Walker, an over-the-hill Cam Newton, and others. Despite his recent struggles, Mayfield represents an upgrade for Moore.

Mayfield enjoyed playing alongside Kareem Hunt and Nick Chubb in Cleveland, and he’d certainly enjoy teaming up with a healthy Christian McCaffrey in Carolina. When available, McCaffrey is the game’s premier dual-threat running back. The likes of Robby Anderson, Terrace Marshall Jr., and Rashard “Hollywood” Higgins help round out an impressive surrounding cast. Mayfield won’t encounter the same dominant offensive line he often had the luxury of playing behind in Cleveland, but the offseason additions of Ikem Ekwonu and Austin Corbett (who Mayfield previously played with in Cleveland) lean favorably toward improvement. Carolina’s offense has often been described as, “being a quarterback away.” Mayfield will now attempt to serve as that solution.

For Cleveland, it welcomes an inevitable conclusion to the Mayfield saga. The Browns signaled their dissatisfaction with Mayfield’s play by acquiring Deshaun Watson and signing him to a historic fully-guaranteed contract worth $230 million. It never felt like Mayfield was going to remain in Cleveland, even with a potentially lengthy suspension looming for Watson due to the league’s ongoing investigation into his alleged off-field behavior. Mayfield wasn’t going to rescue the Browns from the ugly situation they willingly placed themselves in, and Browns General Manager Andrew Berry prepared for Mayfield’s eventual exit by signing Jacoby Brissett earlier this offseason.

Indications that a trade involving Mayfield may have been nearing first arrived in early June when the Browns excused the former No. 1 overall selection from attending their mandatory minicamp. Negotiations have remained steadfast since then and Carolina finally landed the signal-caller of their choosing on Wednesday.

Carolina’s decision to acquire Mayfield is obviously motivated by the pressure the current regime feels to deliver immediate results. Head coach Matt Rhule is on the hot seat after compiling just 10 victories across his first two seasons as Carolina’s head honcho. Mayfield instantly makes Carolina’s offense better, but whether or not it’s enough to convince general manager Scott Fittrerer and owner Dave Tepper to retain Rhule and his staff following the 2022 season remains to be seen.

Mayfield’s first opponent as a member of the Panthers? A Week 1 home contest against his former Browns. It’s must-watch television.