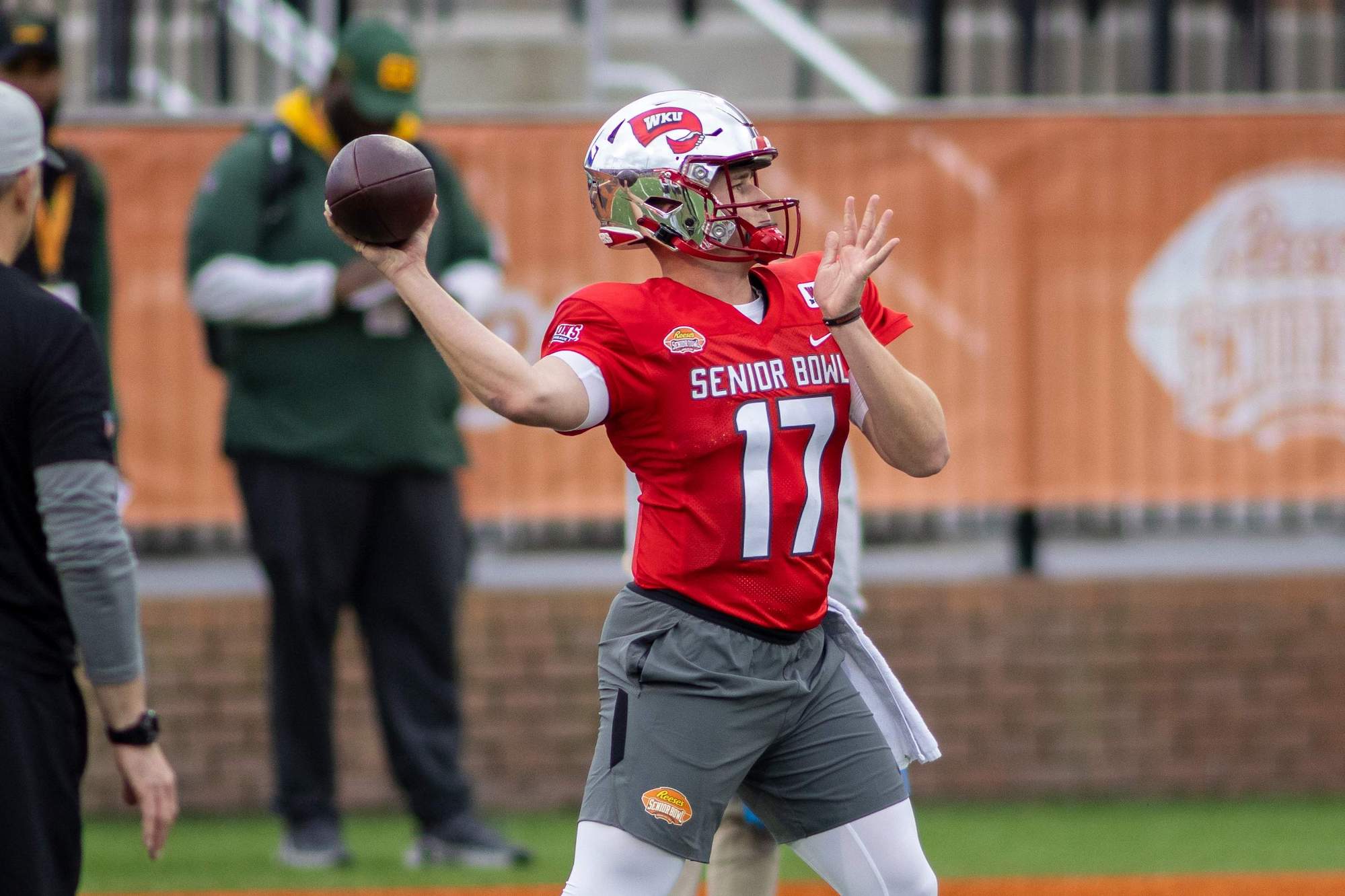 If you’ve ever been to practice for a team that runs the Air Raid offense, you’ve heard the phrase “play the next play” probably more times than you can count. It sounds like a cliche, but there’s value in it and it’s something that former Western Kentucky quarterback Bailey Zappe, who ran the Air Raid in college, definitely had to keep in mind at the Senior Bowl. Zappe was up-and-down on day one, delivering some solid deep passes but missing on some short and intermediate throws. But Zappe saw significant improvement on day two that he only built upon on day three, showing that he could hang both against and surrounded by higher-level competition. “I missed a few throws on the first day—had some good ones and some bad ones,” Bailey Zappe said. “Trying to lean more into good throws than bad throws moving forward and just continuing to improve throughout and let the play do the talking.” “You do get mad at yourself after one bad play, especially when it comes to interceptions and big ones like that. But you have to have a short-term memory,” Bailey Zappe said. “I know it’s a cliche, everybody says it, but you have to move on to the next play. You can’t dwell on a mistake because it just leads to even worse plays later on in the game and it might cost you the game.” As time went on, Zappe’s play backed up the narrative that his FBS record-breaking success was a testament to who he is as a player. He wasn’t putting up those stats purely because of scheme or supporting cast. And perhaps there’s not enough appreciation for just how much responsibility Zappe carried in the offense and how he continually grew as he became more and more on people’s radar. Tyson Helton, who also coached the likes of Sam Darnold while at USC, didn’t call him the best quarterback he’s ever worked around without reason—commending him for how well he dealt with shouldering a large load at the line of scrimmage and for almost instinctively knowing what was going to happen on a play before the ball was ever snapped. “At Houston Baptist, the center did a lot of it (in terms of changing protections),” Zappe said. “ At WKU, the center did a lot of it as well but at WKU, they gave me a little bit more authority to override stuff… if I saw stuff coming from right or left I could always change stuff. At HBU, I was still kind of learning… at WKU they gave me a bit more on my plate. But I like that, I like to do all of that stuff and it helped me grow as a player.” There’s also a large misunderstanding about exactly what the Hilltoppers offense was this season—it’s an Air Raid with somewhat of a twist. Zappe isn’t just checking the ball down every play or benefitting off of YAC, either. “I think when we got to WKU, we integrated a lot of power run scheme,” Zappe said. “Your powers, your counters, all of that. At HBU, we kind of did more inside zone, outside zone. We had a little bit more run game when we got to WKU intermixed with that Air Raid—everybody thinks we’re just straight Air Raid.” One of the biggest adjustments for Zappe now that he’s heading into his professional career is going under center, but it’s something that’s coming easy to him even if he’s not entirely used to it. “I’ve been primarily in the gun in the offense for the last five years,” Zappe said. “It’s something I’ve been working a lot on in draft prep with QB country and I’ve honestly gotten really comfortable under center, it’s not super new to me anymore. Learning new offenses, NFL offenses, new verbiage, it’s been something different but I enjoy learning that stuff. I enjoy getting into the playbook and it’s been fun.” After all the growth he’s experienced and the way he’s put the nation on notice, Zappe’s focus is now on giving his all to help an NFL team achieve its goals. “I bring to the table someone who loves to win. I’m going to do everything I can to help a team be better and I’m going to come in at 110%, be the first one in and the last one to leave, and put an organization in the best position to get a victory.”