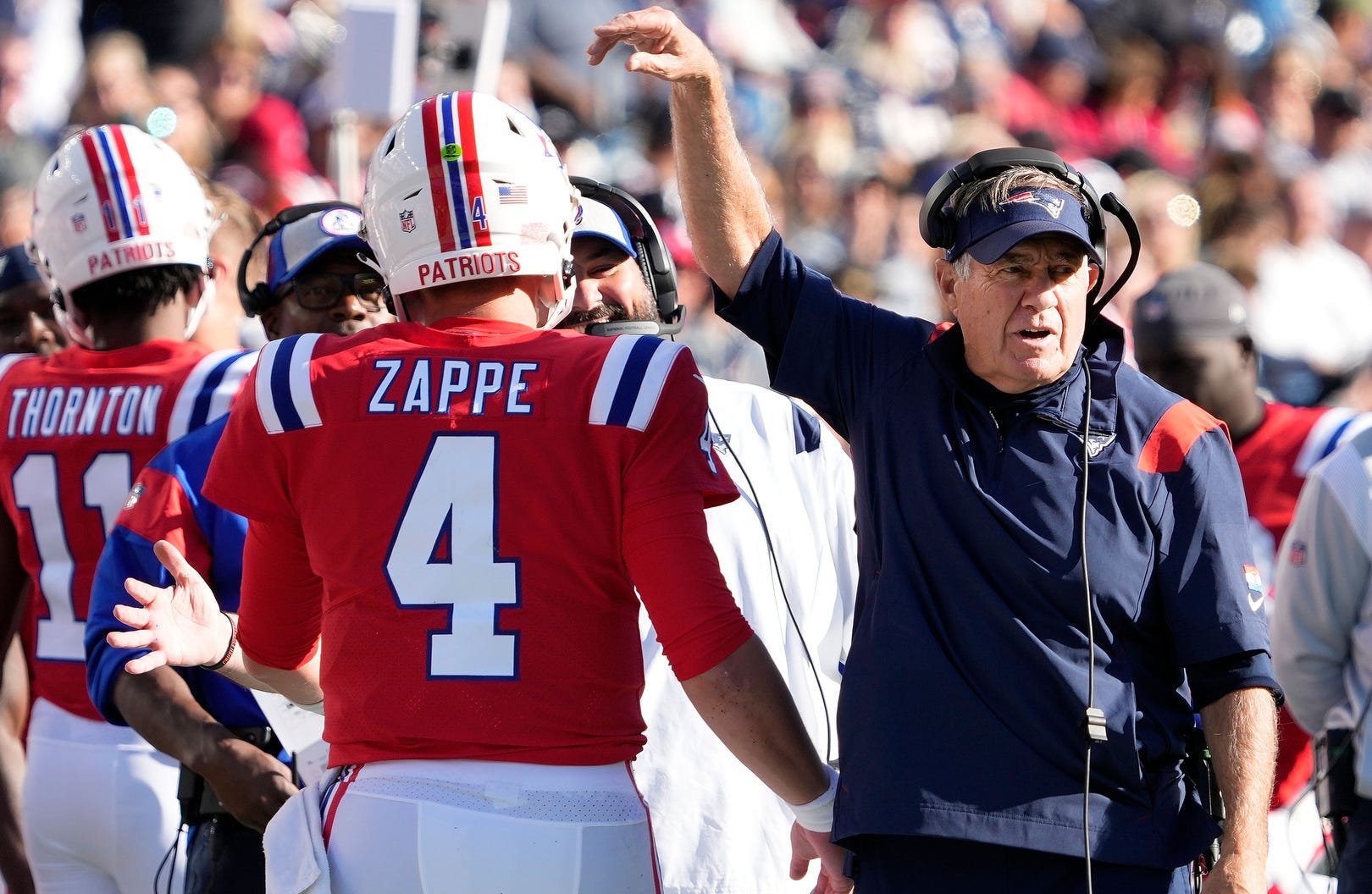 How Bailey Zappe Has Raised Ceiling Of Patriots’ Offense

One of the most interesting things to watch in sports is how a team responds to adversity. Sometimes, a team can lose its star player, its quarterback, its ace pitcher, and that causes them to spiral into irrelevance in what becomes a lost season. Other times, the loss of those key players actually helps make the team better. The latter situation is exactly what’s happening with the New England Patriots right now in the wake of quarterback Mac Jones’ injury. Rookie quarterback Bailey Zappe has stepped up and is actually helping to raise the ceiling of the Patriots’ offense.

It was a rough start to the 2022 season for New England, Jones, and “senior football advisor” (aka offensive play-caller) Matt Patricia. Through four weeks, the team was 1-3, Jones was injured after turning the ball over five times in his first three games, and the offense had scratched out more than 25 points just once. Things weren’t going the way the Patriots hoped they’d go for their offense, and adjustments needed to be made. Jones’ injury forced New England to step back and reevaluate their offensive game plan for Zappe to step in.

The result thus far has been hugely successful. Jones has completed about 66% of his passes this season for 786 yards and two touchdown passes to five interceptions. Zappe, through the first two starts (and half of a game) in his career has completed nearly 73% of his passes for 596 yards with four touchdown passes and just one interception. These contrasting stats don’t necessarily mean Zappe is a better quarterback than Jones is, despite what Boston and the rest of New England’s sports media might be saying right now. Looking deeper into the numbers, we start to see why Zappe has had so much more success leading the Patriots’ offense.

For one, New England isn’t pushing Zappe to force big-time throws he might not be capable of making through his first three games. Where Jones averaged about 33 pass attempts per game and an average depth of target past 10 yards through the first three games of the season, Zappe’s numbers are very different. The rookie never threw more than 21 times in a game before Sunday’s game against the Cleveland Browns, and the average depth of target on his throws so far this season is just over 6.5 yards.

Rather than pushing Zappe into situations where he has to make big throws or take shots on passing downs, the Patriots have been relying more on the run game, short passes, and play-action. As running back Rhamondre Stevenson continues to excel, he’s helped open up more opportunities for Zappe to take those deep shots when he can. Whether it was because of the rookie taking over or just the pressing need to adjust after a rough start to the year, New England’s offense has looked different for the better with Zappe under center.

This is not meant to take away any credit from Zappe, who has obviously had to execute when he does get his chances. The offensive design around him has complemented him and his skill set, yes, but it takes skill to be able to take advantage.

One of the best examples was his nice back-shoulder throw to DeVante Parker early in the game. On a third-and-long play just outside of field goal range early in the game, Zappe was put in a position where he had to throw to get the first down and get his offense some early points. He saw Parker was in man coverage and threw the ball up and to his back shoulder to give his receiver the chance to make the catch. Parker caught it, and the Patriots got a big first down on a drive that eventually led to a field goal.

Another one of Zappe’s best throws from Sunday came off of play-action later on in the game. After getting strip-sacked by Browns edge rusher Myles Garrett earlier in the day, the rookie did a good job stepping up in the pocket to avoid his pressure on the left side. Zappe then recognized his open man after a linebacker bit hard on the play fake and rifled the throw to fellow rookie Tyquan Thornton past the sticks for a first down.

New England’s offense has looked better under Zappe, scoring more points with each passing week that he starts under center. The offensive coaching staff has put him in positions to succeed by switching things up and he’s responded by stepping up in the moments they need him to. There will inevitably be some quarterback controversy in New England as Zappe continues to succeed. Regardless of the outcome, it’s clear the Patriots have a much tougher choice to make if Zappe keeps leading the offense to better production and more victories.