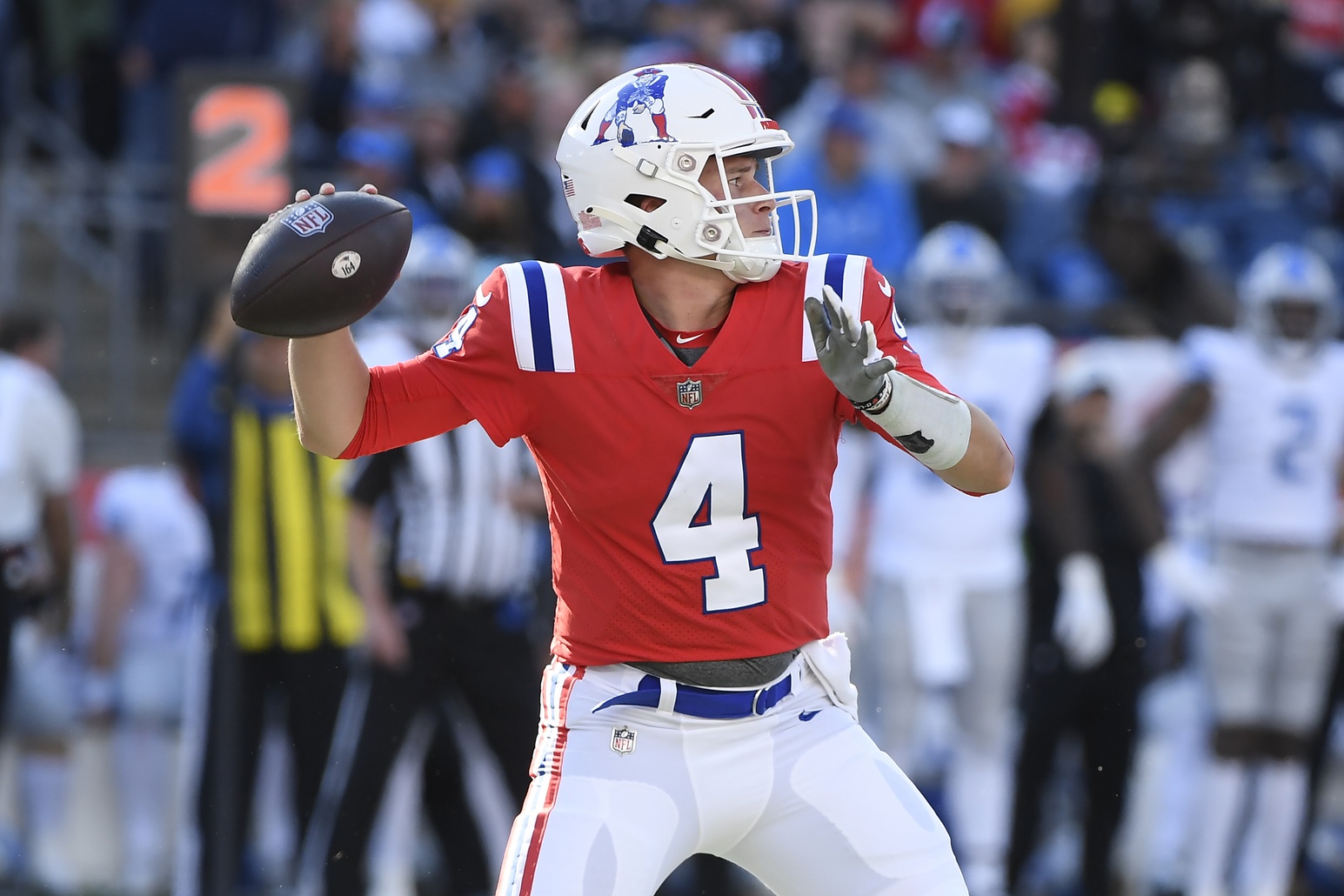 Not to overreact, but the last time the New England Patriots had a young backup quarterback take over early in the season and record a win in his first start… Seriously though, rookie quarterback Bailey Zappe deserves a lot of credit for stepping up and securing a win in his first career start after injuries to starter Mac Jones and backup Brian Hoyer.

Having Zappe play—let alone start—was not a situation anyone, especially the Patriots, envisioned happening ahead of this season with Jones entering his second year as a pro. But given the rookie’s reliable and confident play in his first two games in action, New England has to be happy to have him.

Things were clicking all day for Zappe and the Patriots. Their defense was fantastic, holding the Detroit Lions, who entered the day as the NFL’s highest-scoring offense, to zero points. The offensive line, who Zappe called the MVP of the day after the game, didn’t allow a single pressure in the game. Running back Rhamondre Stevenson ran for 161 yards on 25 carries. And the rookie quarterback, for his part, played like a guy who had been starting games all year with tons of poise, confidence, and smart decision-making all day.

Zappe finished the game with just four incompletions—a 17-for-21 line—and spread the ball around with targets to seven different receivers and receptions by six of them. He threw for 188 yards in all and connected with receiver Jakobi Meyers for his second career touchdown pass on a well-placed throw over the outstretched hands of a Lions corner.

Detroit may not have recorded an official pressure on that play, but Zappe did a good job stepping up in the pocket and keeping his eyes downfield as his offensive linemen blocked defenders around him. Pocket manipulation was something he’s always been good at going back to his time in college, and that’s clearly already started to translate into success at the NFL level.

Another thing that has translated well so far for Zappe is his decisiveness and ability to work quickly through his progressions. One throw to tight end Hunter Henry early in the game showed off both of those skills.

It took the rookie gunslinger less than an extra second after dropping back to see Henry run past a defender who had fallen over and make the throw. It wasn’t a difficult throw once the tight end was wide open, but if Zappe had taken any longer or hesitated, the linebacker or safety could have come over to defend the pass. Instead, the quarterback was already starting his throw as soon as Henry broke open and left the Lions no chance to defend.

The Western Kentucky product also threw his first career interception on Sunday, but it’s really hard to find him at fault with receiver Nelson Agholor tossing the ball in the air the way he did on a good pass with some zip.

While the Lions aren’t the best defense in the NFL, the confidence that Zappe showed in his first career start was good to see. Through his first two career games, he’s proven himself worthy of running the Patriots’ offense when called upon. New England hadn’t scored more than 26 points coming into Sunday’s action, and under Zappe, they scored 29. He obviously doesn’t deserve all of the credit for making the offense as productive as it was, especially with how well Stevenson ran on Sunday, but the team not taking a step back offensively speaks volumes about Zappe’s capabilities.

What also speaks to Zappe’s qualities not just as a player but as a team leader was how his teammates talked about him after the game. Henry shouted out his command of the huddle, and center David Andrews complimented his ability to make the right reads and pre-snap checks. Perhaps that shouldn’t really even be a surprise though, since Jeff Howe of The Athletic reported that Zappe was studying Lions film as early as last Sunday night and looked prepared to be the starter all week.

Zappe likely won’t be pulling a full Tom Brady by taking over as the full-time starter. Jones is still only a second-year quarterback and there’s no doubt the Patriots consider him to be their guy. But the first two weeks of Zappe’s pro career have given his coaches plenty of reason to be impressed, keeping New England’s offense rolling in Jones’ absence. Other teams that lack confidence in their situation under center should be taking note.