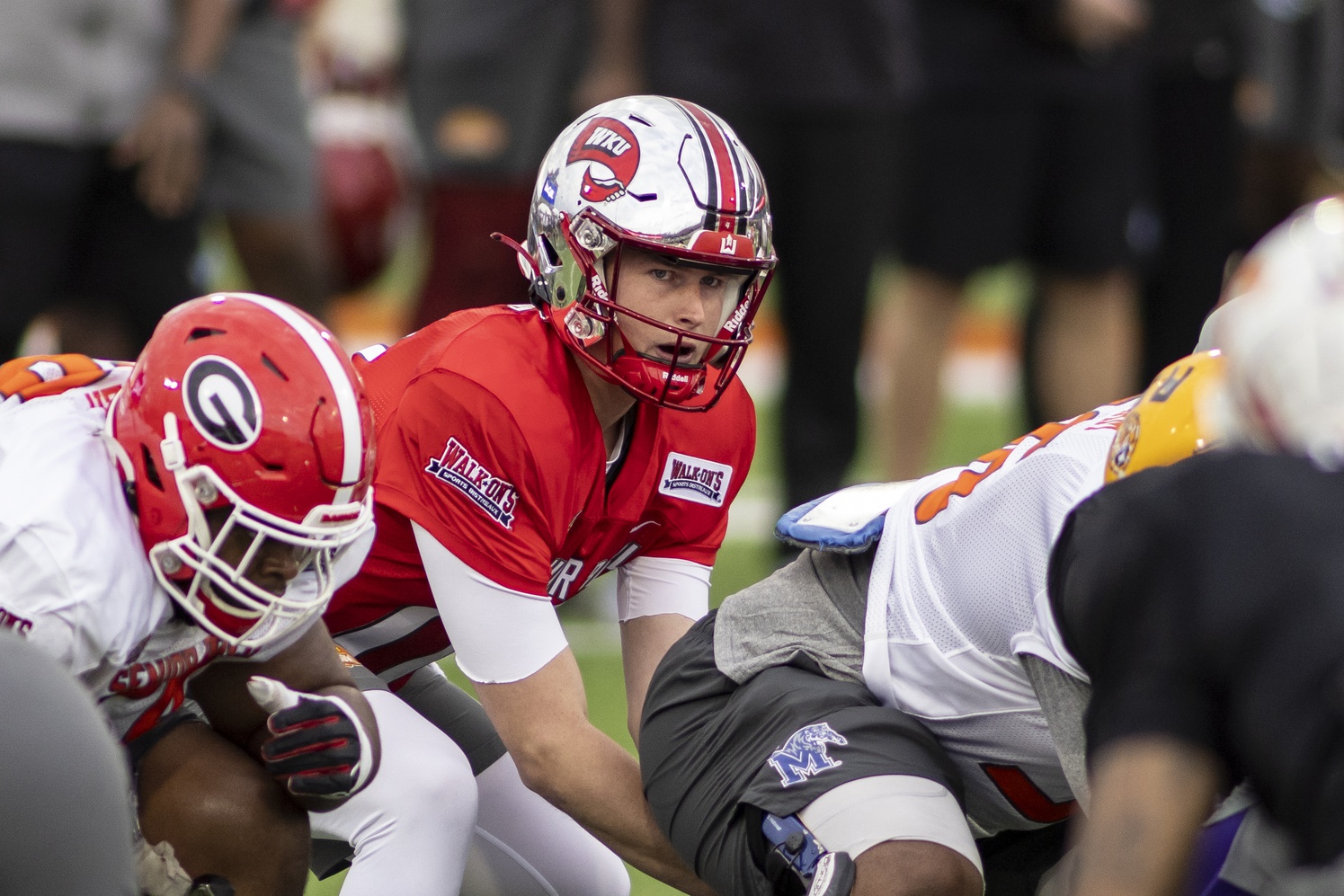 Western Kentucky’s Bailey Zappe is one of the most intriguing quarterbacks in the 2022 NFL Draft. Zappe was electric for the Hilltoppers as a Senior in 2021, throwing for nearly 6,000 yards and a staggering 62 touchdowns in 14 appearances en route to capturing the Most Valuable Player honor in the Conference USA. Zappe has continued to showcase himself in the desired manner throughout the pre-draft process with strong showings at the Senior Bowl and NFL Scouting Combine.

Zappe recently spoke exclusively with The Draft Network regarding his combine performance and experience, the electric numbers he put up at Western Kentucky, how he reflects on the decision to transfer, how playing in Western Kentucky’s offense helped prepare him for the next level, and a whole lot more.

JM: You were electric in 2021. You threw for nearly 6,000 yards and 62 touchdowns. Those numbers don’t even sound realistic. How do you reflect on the decision to transfer to Western Kentucky?

BZ: To be completely honest with you, it’s probably the best decision I’ve ever made throughout my entire life. Of course, it was still a difficult decision to enter the transfer portal. Leaving Houston Baptist was not an easy decision. I poured my heart out throughout four years at HBU. I grew up and matured with the people at Houston Baptist. I was sad to leave but once coach Zach Kittley got the offensive coordinator job at Western Kentucky, I felt like the best move for me and my career was to enter the portal and reunite with him at Western Kentucky. It was a terrific opportunity that presented itself.

I heard from several teams once I entered the portal, but my heart was always with coach Kittley and in his offense. We ran that offense together for several seasons together at Houston Baptist as well. I wanted to spend my last season with him and in the same offense and alongside some of my best friends. I had a great final season at Western Kentucky and I’m glad I made the decision to go there. It’s by far the best decision I’ve ever made.

JM: There’s no denying that and I feel like you’ve aced this pre-draft process. What do you think you proved to general managers, coaches, and scouts at the Senior Bowl and NFL Scouting Combine?

BZ: I think there are a lot of things I can still improve on, especially coming from the type of offense I played in. I don’t shy away from that. We were primarily in shotgun and I was rarely under center. That’s something I’ve spent a lot of time working on throughout my training at QB Country in Mobile, Alabama with coach David Morris. I’ve been getting under center and getting used to the drops and the throws. I’m getting more comfortable there and we’re expanding my game. That’s something I wanted to prove at the Senior Bowl. I wanted to show that I’m not a guy that has to live in the shotgun. I can play under center as well. I can play at a high level in both situations.

Other than that, we’ve been improving my deep ball accuracy. Arm strength is always something I’ve harped on. We’ve been working on that and improving it and I feel like I showed some strides at the Senior Bowl and the combine. There’s always stuff I can improve on, and I’m excited to do just that when I reach my NFL destination.

JM: You clearly have a terrific work ethic. I asked about what you proved and I note that you spend your time discussing areas you’re looking to get better in. Speaking of the combine, which teams did you meet with formally there, and do you have any virtual meetings coming up?

BZ: I met with a bunch of teams informally at the combine, and I do have some virtual visits and top-30 in-person visits on my calendar, but I’m keeping the list of teams private out of respect for them. I’ve probably spoken to roughly 15-20 teams throughout the process. We’ve been doing Zoom interviews. I’ll have some interviews at my Pro Day as well.

JM: There’s obviously a lot of interest in you and it’s easy to see why. You’ve talked a lot about the offense you played in. Western Kentucky obviously threw the ball a ton last season. How do you think that helped prepare you for the next level?

BZ: I think I made a lot of throws that will translate to the NFL level. I had to go through my progressions and make good decisions. A lot of people have misconceptions about the Air Raid offense and they say it requires just half-field reads. There’s a lot that went into coach Kittley’s offense and he made a lot of changes and really shaped his own version of the Air Raid. We had pure progressions. I had to read the entire field.

We had passing concepts that covered every area of the field. That’s really going to help me transition to the NFL. Obviously, I’ll be asked to make those pure progressions in the NFL. There’s some half-field stuff as well, but the majority of the pro game is field progression full-field stuff. Being in an offense that threw the ball a lot has developed me into a quarterback that can go through his progressions. I know when to check it down and I know when to take shots. You have to know what the defense is giving you. I had to take advantage of that and it’s definitely going to help me as I prepare to take that next step in the NFL.

JM: You clearly mastered coach Kittley’s offense. What were some of the responsibilities you held at the line of scrimmage?

BZ: I basically had all of the responsibilities. Coach Kittley would signal me the play and I would signal it to the receivers. I would tell the running back his responsibilities and I would make the line call. The only thing I didn’t do was I.D. the MIKE. Our center held that responsibility, he took care of ID’ing the MIKE linebacker. Our starting center did a phenomenal job with that. With that said, if I ever saw anything, if I recognized certain blitzes or saw something that might throw us off course, I could always read the MIKE and I had the freedom to put us in a better situation. I would give the offensive line a heads up if I saw something.

JM: Earlier you mentioned knowing when to check it down and knowing when to take shots. As a quarterback that had a lot of freedom within the offense, how do you balance being aggressive with taking what the defense gives you?

BZ: That’s something that you have to learn and develop over the years. When I first learned the offense, of course, there were some learning curves involved. I started playing in this offense during my sophomore season at Houston Baptist. I learned a lot the hard way at first (laughs). I learned what checks not to make and which ones to make. I learned a lot from coach Kittley throughout the years. I had a bunch of great guys, coaches, and teammates around me. I tried to get the ball in their hands.

There are always going to be some situations where you want to take a shot. In other situations, you want to quickly get the ball out to the flats and trust your playmakers to do their jobs. On second-and-short or third-and-short, sometimes you just want to move the chains and take what the defense gives you. For us, once we got a first down, we went tempo. I could check into a run and just pick up the first down.

Being able to have that freedom, paired with being able to see the entire field, I had to identify the holes in the defense and what coverage they’re running. Everything gets decided from there. I have to get us into the right play. That’s something that I really loved about our offense. I’m thankful coach Kittley gave me that freedom. That’s another thing that’s going to help me make the transition to the next level.

JM: When we turn the tape on, we see a quarterback that works through his progressions and hits throws with anticipation. You’ve touched on those topics. How did you develop those aspects of your game?

BZ: A lot of hard work went into that. When it comes to anticipation, it’s all about the timing with the outs, the curls and routes of that nature. We ran a lot of post curls in our offense. A lot of that involves getting the ball outside into the hands of your playmakers on time and efficiently. We developed that chemistry by virtue of repetition. We got outside, got together, and put in extra work after conditioning and after workouts. We got in a lot of extra reps after practice. We built that connection to where it carried over onto the field on game day.

Our offense was predicated on a lot of that stuff. A lot of teams liked to drop eight defenders against us, especially when they knew we were throwing the ball. When they dropped eight, the holes in zones are a lot smaller so anticipation and timing becomes so much more important. All of that stuff had to be on point. The defenses we played against required that. We really had to put that extra work in after practice and any other commitments so we could build that connection.

JM: That’s terrific stuff. I’ve really appreciated your time today. In closing, when a team uses a draft pick on Bailey Zappe, what kind of quarterback are they getting?

BZ: They’re going to get a guy that’s going to do everything he can to help a team win. I have a great mentality and I’m going to try to get 1% better every day. That’s how I approach the game. I’m always looking to get better than I was the day before.

I’m the first guy in the facility and the last one to leave. I’m excited for the opportunity. I’m going to do everything I can to help the team win. It’s all about winning football games at the end of the day.