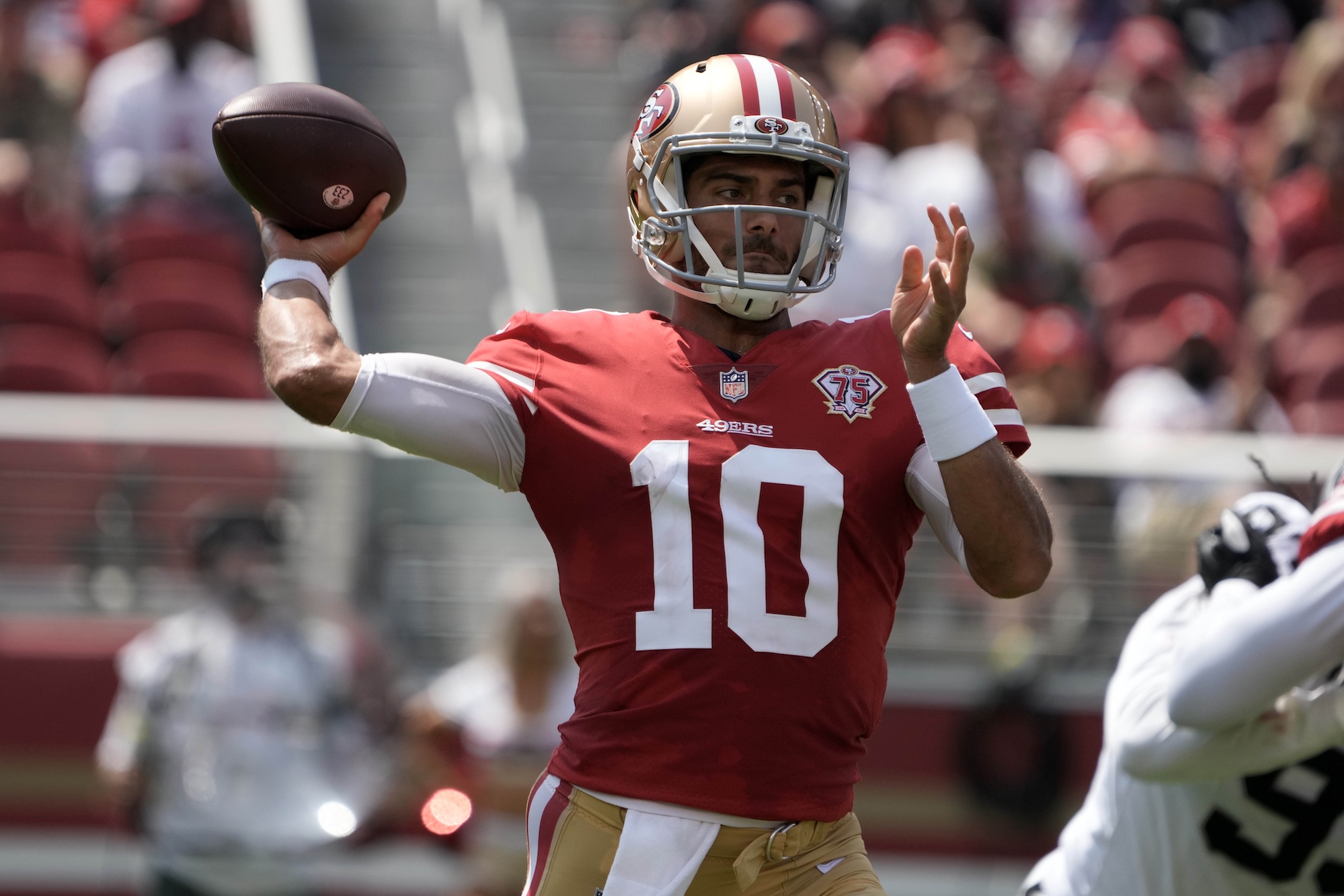 Should Falcons trade for Jimmy Garoppolo?

The San Francisco 49ers have granted permission for quarterback Jimmy Garoppolo to pursue a trade. Garoppolo has been cleared to start practicing after undergoing offseason surgery for a shoulder injury. It previously brought things to a halt, but Garoppolo’s improving health means his market could quickly heat up. According to multiple reports, the Atlanta Falcons have been mentioned as a possible landing spot.

The Falcons’ current roster features a  less-than-desirable quarterback situation, so it’s easy to understand why they’d potentially explore what’s available via the veteran trade market. Despite the Falcons needing a clear upgrade under center, they shouldn’t trade for Garoppolo.

Veteran quarterback Marcus Mariota is expected to start at quarterback for the Falcons in Week 1. A former No. 2 overall selection, Mariota shares a history with Falcons Head Coach Arthur Smith, after the two worked together in Tennessee. Mariota has a grasp of Smith’s offense, which is partially why they pursued him immediately after trading Matt Ryan. Behind Mariota is third-round rookie Desmond Ridder, who was often touted as the most pro-ready quarterback in the 2022 NFL Draft. Atlanta represented an ideal landing spot for Ridder because there’s a decent chance the Falcons will allow him an opportunity to prove he can be their quarterback of the future at some point this season. His vast experience at Cincinnati makes Ridder ready for playing time in the NFL.

While some may argue Garoppolo is a better quarterback than Mariota or Ridder, there’s one clear difference that sets them apart. Both Mariota and Ridder are mobile quarterbacks that can move the pocket and make plays outside of structure. Both of Atlanta’s quarterbacks can move the chains with their legs, something Garoppolo can’t do. Being athletically gifted is almost a prerequisite to operating Smith’s offense.

Smith had an overwhelming amount of success as Tennessee’s offensive coordinator (the Titans averaged 30.7 points per contest in 2020) with an agile Ryan Tannehill under center. Tannehill struggled without Smith in 2021. Smith’s system got the most out of Tannehill and it’s fair to wonder if his scheme could do the same for Mariota or Ridder, the latter of which has no issues comparing himself to Tannehill throughout the pre-draft process. In fact, Smith’s offense is fairly similar to what Kyle Shanahan runs in San Francisco, and they decided to replace Garoppolo with a more athletic quarterback in Trey Lance.

Garoppolo is a pocket quarterback that lacks the athletic ability to escape pressure with any consistency. It makes him a poor fit for Smith’s offense. Atlanta’s offensive line also leaves plenty to be desired in pass protection. Starting left guard Jalen Mayfield allowed a league-high 11 sacks as a rookie, via Pro Football Focus, and questions at center and right tackle still remain present. An agile quarterback such as Mariota or Ridder represents a better fit behind an offensive line that will likely demand them to rely on their legs more often than Smith would prefer. Garoppolo has never thrived under pressure, often requiring a clean pocket and open target in order to make sound decisions. A team can win with Garoppolo (the 49ers have won plenty), but nothing about Atlanta suggests they’re capable of replicating that success.
Garoppolo’s current contract further complicates matters. The former Eastern Illinois standout is scheduled to earn a base salary of $24.2 million in 2022 while carrying a cap hit of nearly $27 million. Garoppolo’s representation is unlikely to find a taker at those current numbers, and the Falcons had noted salary cap-related issues earlier this offseason. Any agreement would likely have to include a reworked contract at a number far less than what Garoppolo is currently earning. It’s not a gigantic roadblock, but it’s worth acknowledging.

Falcons General Manager Terry Fontenot and Smith have been extremely careful when dealing with the future of their quarterback position. Fontenot passed on an opportunity to draft Justin Fields or Mac Jones in the 2021 NFL Draft, opting to draft tight end Kyle Pitts instead. Earlier this offseason, the Falcons attempted to land disgruntled quarterback (and Gainesville, Georgia native) Deshaun Watson, but the Cleveland Browns won those sweepstakes, partially due to them offering a fully-guaranteed $230 million contract. The Falcons are dreaming big at quarterback. Bigger than Garoppolo.

Fontenot passed on additional opportunities to draft a quarterback in the first round of the 2022 NFL Draft, opting to eventually draft Ridder on Day Two. Nothing about the Falcons’ approach has insisted they’re desperate enough to settle for a bridge quarterback that’s not even a good fit for their roster or offense like Garoppolo. The Falcons will remain patient in their search, with an eye pointed toward the uber-talented quarterback class in the 2023 NFL Draft.