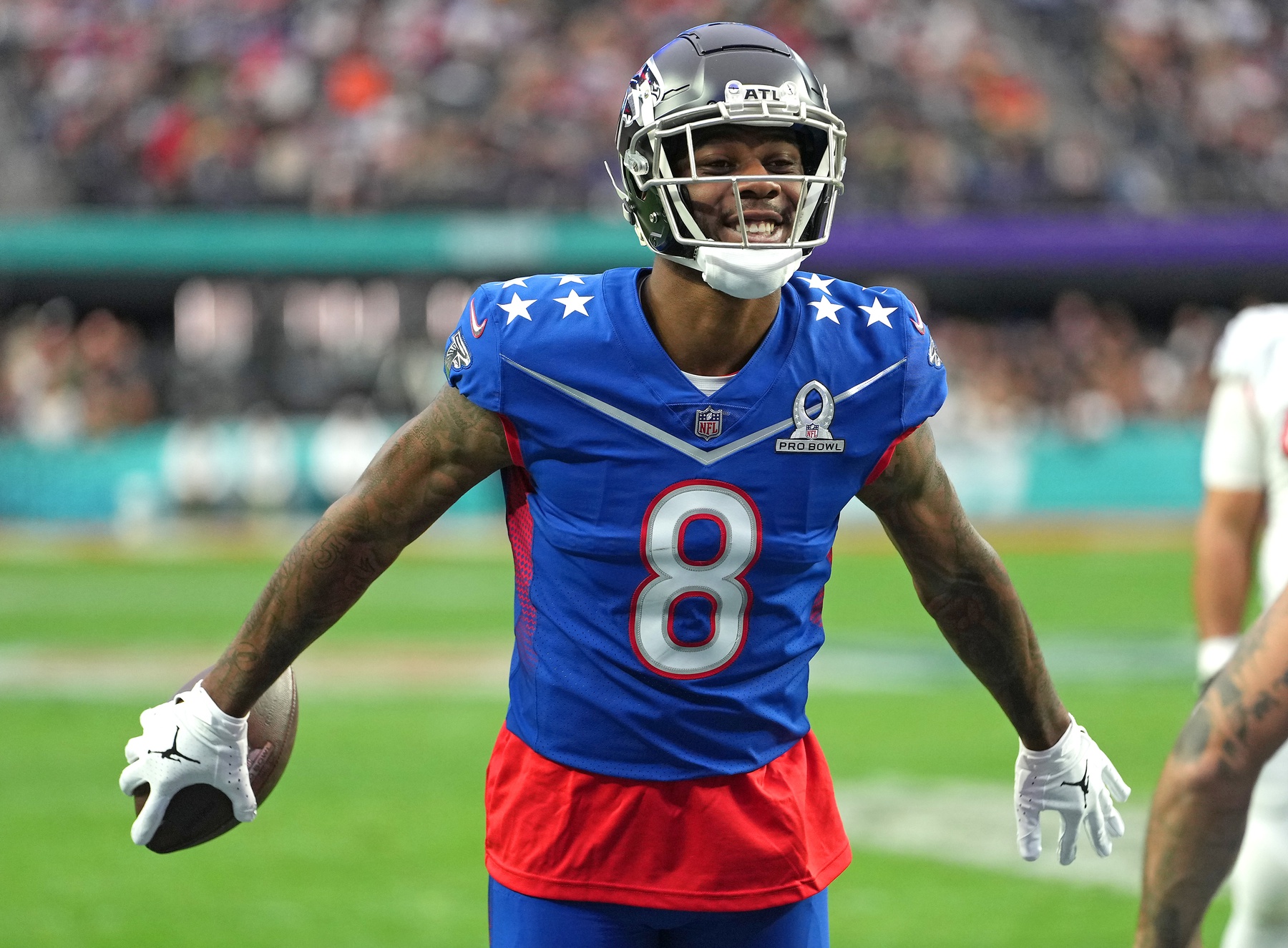 What Will Make 2022 Season A Success For Falcons?

The Atlanta Falcons enter the 2022 campaign as a team that’s officially in transition. Falcons General Manager Terry Fontenot admitted defeat on Atlanta’s current chances of being a legitimate postseason contender by trading franchise quarterback Matt Ryan to the Indianapolis Colts earlier this offseason. The Falcons are finally launching a true rebuilding period as a result—something they perhaps should have considered inciting earlier, but better late than never.

The 2021 Falcons overachieved. The seven-win Falcons rarely looked the sum of their parts, but first-year head coach Arthur Smith managed to crawl toward a respectable record nonetheless. There was no use pretending the Falcons were inching closer to becoming a double-digit win squad, however, and Fontenot has admitted that sometimes you need to go backward before moving forward (actions speak louder than words). That was the theme of Fontenot’s offseason. As a result, a successful 2022 season in Atlanta doesn’t have to involve a postseason berth—it likely won’t anyway.

A 2022 successful season in Atlanta should be defined by ushering in a nucleus of young talents that prove ready to carry the torch from the playmakers of yesteryear. Offensively, this can be achieved through Atlanta’s young playmakers despite a question mark at the most important position in the sport (more on that shortly).

Sophomore-to-be tight end Kyle Pitts lived up to expectations by recording a 1,000-yard season as a first-year player. Pitts joined Hall of Famer Mike Ditka as the lone rookie tight ends to surpass 1,000 receiving yards. Pitts was named to the Pro Bowl for his efforts, becoming the first rookie tight end to achieve that feat since New York Giants legend Jeremy Shockey in 2002.

Pitts was often the lone reliable target on the field for Atlanta in 2021. The drafting of Drake London should add a much-needed second option going forward. The first wide receiver off the board in April’s draft via a top-10 selection, the towering 6-foot-5 London will immediately serve as the “X” in an Atlanta offense that desperately requires a dominant boundary target in the wake of Calvin Ridley’s year-long suspension.

Ridley may never play for the Falcons again. It’s an unforeseen situation that places added emphasis on the development of both London and Pitts. If these two playmakers form the haunting duo they’re capable of being, the Falcons’ front-office brass may consider the 2022 campaign a success regardless of what their final record reads. It’s all about building toward the future. Whether or not Bryan Edwards proves to be a viable No. 2 receiver also looms large.

While there’s a banner of optimism at the playmaking positions, questions litter the remainder of the offense, particularly at quarterback. Ryan has been replaced by former first-round bust Marcus Mariota. A true bridge option that’s struggled to stay healthy when asked to serve as a starting quarterback, Mariota at least brings a hint of familiarity via previous experience alongside coach Smith. Mariota didn’t exactly light the world on fire in Tennessee under Smith’s guidance however and was eventually benched in favor of Ryan Tannehill. Mariota’s knowledge of Smith’s offense makes him the favorite to begin the season under center.

Waiting in the wings behind Mariota is rookie quarterback Desmond Ridder, who Fontenot drafted with a third-round selection. One of the more pro-ready quarterbacks in April’s draft, Ridder could conceivably receive playing time as a rookie if he outplays Mariota throughout training camp and the preseason. While this may not be currently viewed as a true quarterback competition heading into camp, Ridder could quickly change the narrative with eye-opening practices.

Ridder will almost certainly see the field as a rookie regardless of who starts Week 1. Mariota’s aforementioned struggles with consistency and injuries nearly guarantee Ridder will receive an opportunity. The Falcons are unlikely to find themselves in the thick of a postseason race. Fontenot and Smith will want to find out more about their rookie signal-caller before heading into another crucial offseason. Ridder showcasing the potential to serve as Atlanta’s long-term quarterback would make the season a successful one regardless of what occurs elsewhere.

The offensive line remains a makeshift unit. Rookie guard Jalen Mayfield suffered through one of the most difficult rookie seasons for a blocker we’ve witnessed in recent history. Mayfield was credited with giving up a league-high 11 sacks while earning a pass blocking grade of 27.6, via Pro Football Focus. The Falcons didn’t do much to address the situation at guard this offseason outside of sixth-round draft pick Justin Shaffer. Mayfield may be afforded the opportunity to start again. It’s a risky proposition.

Starting center Matt Hennessy had similar struggles in pass protection last season, but Hennessy at least scored major brownie points for his abilities as a run blocker. Right tackle Kaleb McGary has thus far failed to live up to his first-round billing. Chris Lindstrom and Jake Matthews are stalwarts, but the other three offensive line positions could use upgrading.

Atlanta’s underperforming offensive line hampered their ability to run the football with any consistency last season. The Falcons fielded the 31st-ranked rushing attack, averaging just 85.4 yards per contest. Do-it-all weapon Cordarrelle Patterson returns via a newly minted contract after finally breaking out under Smith’s creative usage. Patterson should help the Falcons’ offense keep opposing defenses on their toes via his versatile ability to line up all over the offensive formation. The additions of Damien Williams and Tyler Allgeier could help the Falcons improve their backfield production, but a big step forward isn’t expected under the current group, especially when forecasting more offensive line difficulties.

Atlanta’s defense is spearheaded by the elite presences of Grady Jarrett and A.J. Terrell. Jarrett has spent his entire career as a Falcon. A lack of talent around Jarrett has limited his ability to make his true impact over the previous two seasons, but make no mistake, Jarrett remains one of the more feared interior defenders in the league. Terrell is flat-out a budding superstar at cornerback. Playing in Atlanta has limited Terrell’s national exposure, but Terrell was outstanding in coverage last season. The former Clemson Tiger is well on his way to becoming a top-five cornerback.

The supporting cast received an intriguing overhaul via the 2022 NFL Draft. Fontenot used three selections within 44 overall picks (No. 38 to No. 82) on defensive players. First up was former Penn State EDGE rusher Arnold Ebiketie who may immediately step into a starting role. The Falcons logged a league-low 18.0 sacks last season, which is barely more than one quarterback takedown per game. Simply put, the Falcons didn’t apply any pressure on opposing quarterbacks. Ebiketie will be tasked with changing that immediately. Promising Western Kentucky pass rusher DeAngelo Malone was also drafted and should earn rotational snaps as a first-year player. Fontenot also took a flier on former third-round selection Lorenzo Carter, a 26-year-old reclamation project that sneakily totaled a career-high 5.0 sacks last season.

Rookie linebacker Troy Andersen joins a revamped position room that must navigate the challenge of replacing Foyesade Oluokun. A player that curiously pulled double-duty at running back at Montana State, the raw Andersen will be eased into the lineup. The Falcons took another free-agent flier on Rashaan Evans, reuniting him with current defensive coordinator Dean Pees. A former first-round selection out of Alabama, Evans played the best football of his career under Pees (and Smith, in a roundabout way) in Tennessee.

The outlook for the 2022 Falcons remains bleak. The expectation is the Falcons are more likely to contend for the No. 1 overall pick in the 2023 NFL Draft than they are to contend for the NFC South divisional crown. A failure to secure a playoff berth in 2022 wouldn’t be viewed as a disappointment so long as the Falcons showcase necessary growth, particularly via their young, budding playmakers.