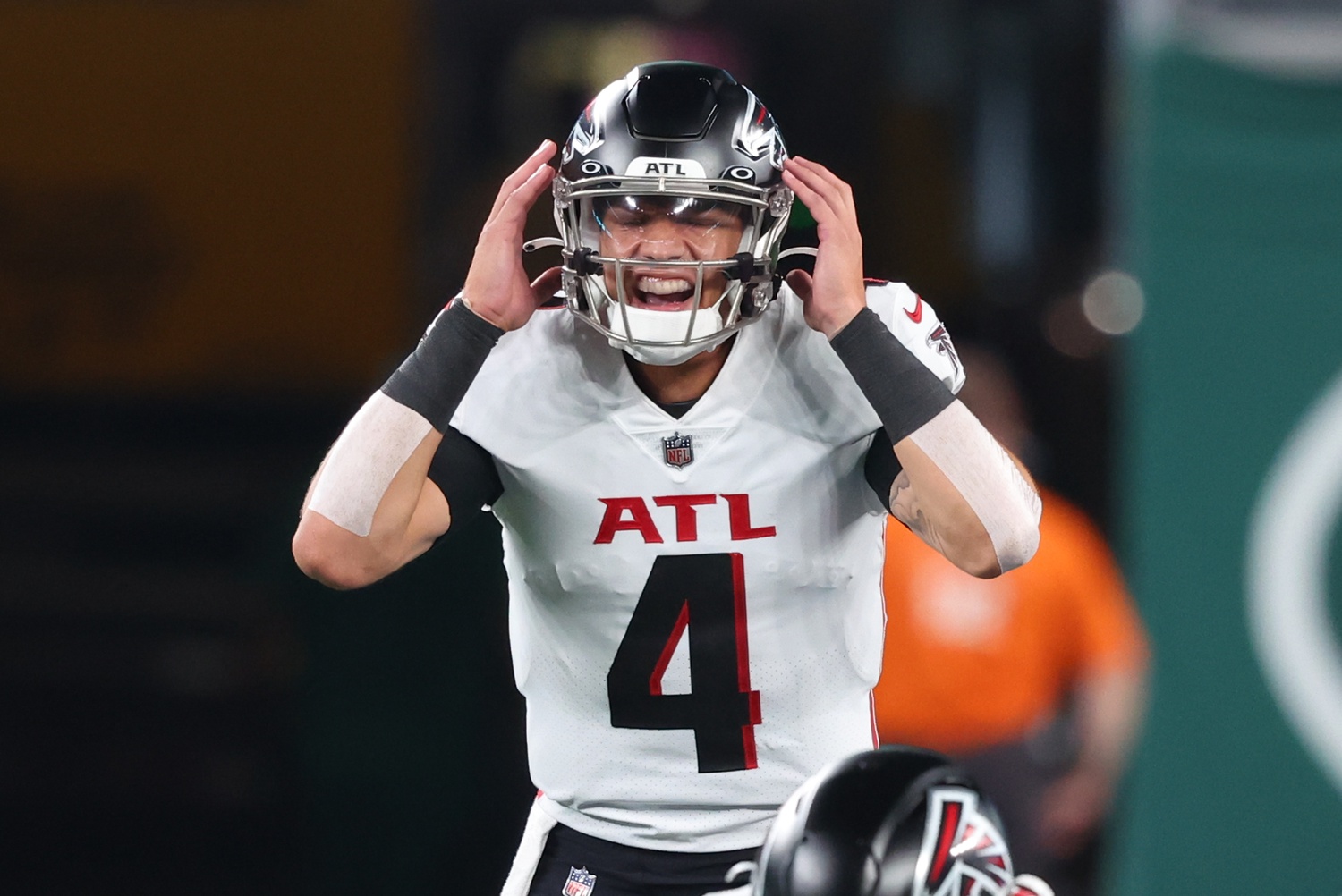 Is It Time For Falcons To Start Desmond Ridder?

We’re only five weeks into the Marcus Mariota experience in Atlanta, but it already feels like it’s time for the Falcons to hand over quarterbacking duties to rookie Desmond Ridder.

It’s all well and good to point to the refs’ ridiculous roughing the passer call on Atlanta late in the fourth quarter as the reason the Tampa Bay Buccaneers won. It was egregiously bad and has been (deservedly so) one of the most talked about moments of Week 5. But did Falcons fans really have faith in Mariota to lead a game-winning drive somewhere between 75 and 90 yards with one timeout and down six points? From what he’s shown us so far this year, it’s hard to believe he could have done it.

The Falcons this season are very clearly a run-first offense. Rookie running back Tyler Allgeier has been solid in his first five weeks of action, and the guys he’s sharing the backfield with, fellow rookie Caleb Huntley and especially veteran Cordarrelle Patterson, have more than held their own as well. The real problem with their offense has been the utter lack of an even semi-threatening passing game to pair with it.

Mariota has just not been able to get things going as a passer, something that has become particularly obvious over the past two weeks. In his last eight quarters of football, the eight-year veteran and former second-overall pick has completed just 21 of his 44 passes for 286 yards with a touchdown and an interception. In the first half on Sunday, he was 5-for-14 for 52 yards. Mariota’s biggest contribution to Atlanta’s offense this week was with his legs, as he led the team in rushing yards and averaged more yards per rush than per completed pass.

It’s not just box score scouting that paints a bad picture of Mariota. His decision-making and inability to make good things happen in the last couple of weeks especially seem to be holding Atlanta back. Yes, the team beat the Cleveland Browns last weekend, but the run game deserved nearly all of the credit when Mariota was double-clutching on some throws, forcing other throws into tight windows, and staring down his intended target on a few more.

When your team can’t or refuses to pass the ball because of the quarterback’s futility, it makes the offense extremely one-dimensional. The Falcons can’t only rely on the run game if they consistently get stuck in 3rd-and-long situations. In late-game situations when they’re facing a points deficit, they can’t chew up the clock by running the ball over and over again.

Mariota doesn’t deserve all the blame for the passing offense’s rough performance against the Buccaneers with a few drops from receivers playing a part along with several missed blocks by the offensive line leading to his five sacks taken on the day. But sometimes, teams have to make a change at football’s most important position when the passing game just isn’t working. Atlanta knew what they were getting with Mariota and always knew it would be a possibility that he wasn’t the answer; there’s a reason they drafted Ridder in the third round. After a solid 2-3 start thanks in large part to their rushing offense, it’s hard not to wonder how much better the Falcons would be if they trusted their quarterback to throw the ball more. All three of their losses have been by one score, and the one-dimensional nature of their offense is partly to blame.

Desmond Ridder could give the Falcons a better chance as a guy with mobility, quick processing ability in the pocket, and good arm strength. Those first two qualities ensure that Atlanta can trust the rookie to keep plays alive or get the ball off quickly even under pressure allowed by the offensive line, and his arm strength gives them more of an opportunity to push the ball vertically in the passing game.

Not to mention, shouldn’t the Falcons want to know what they have in Ridder before next year’s draft rolls around? If Ridder performs well, it could: a) take them out of the position to need/draft a quarterback with a high pick or b) give them the comfort of knowing they can trade back from a higher pick and get more opportunities to build around Ridder if they like what they see from the rookie even if doesn’t always translate to wins.

The Mariota experiment seems to be running out of steam after five games. It might just be time for Desmond Ridder to get his chance.