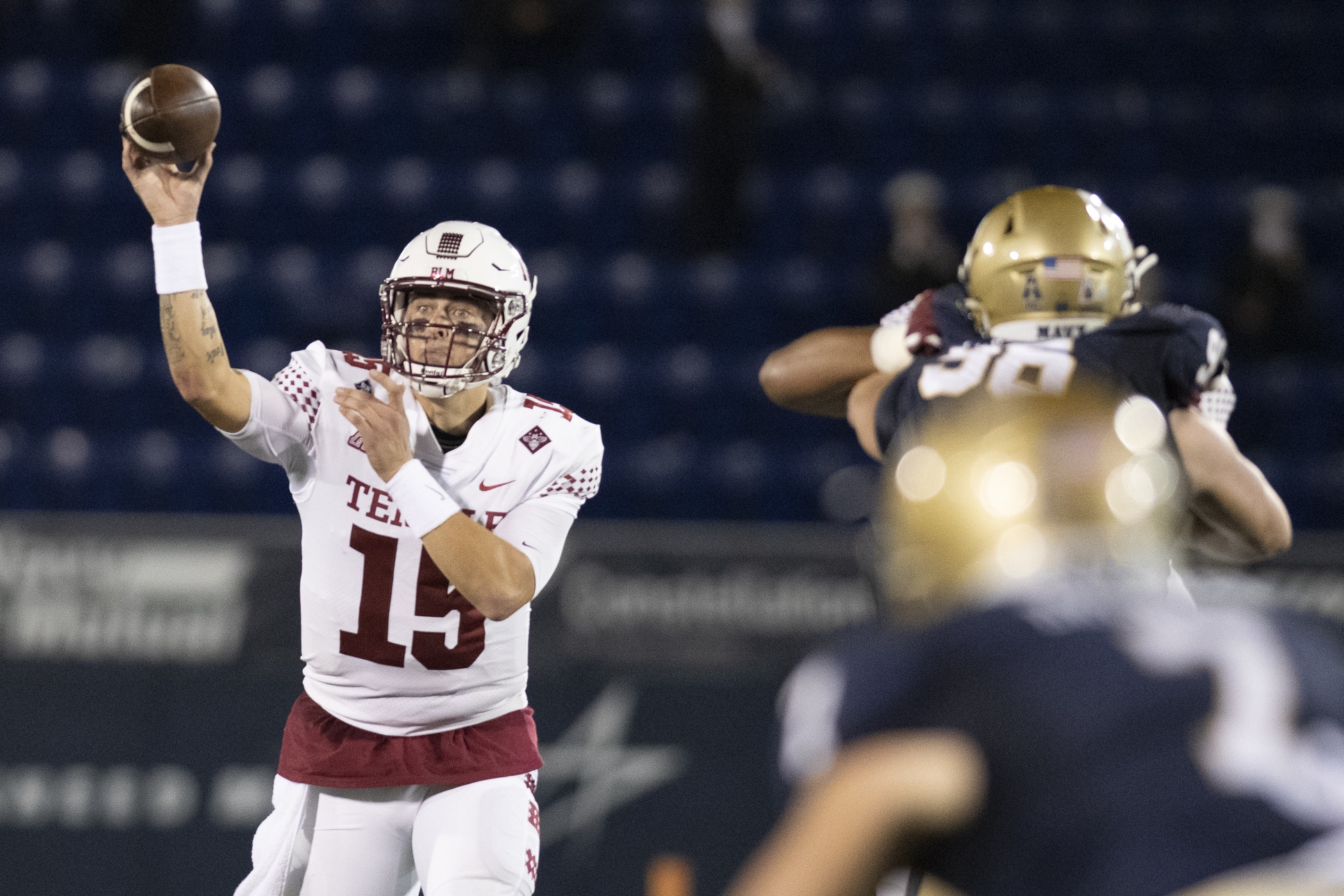 There’s plenty of talk of physical attributes and on-field talent when it comes to the quarterback position, but how well he can rally a locker room and connect with his teammates is equally – if not more – important. That’s something former Temple and Michigan State quarterback Anthony Russo prides himself on and believes will carry that over well as he looks to get a shot with a team at the next level in 2022.

“I think what I bring to an NFL team is a hardworking guy,” Russo said. “As a quarterback, you have to be that type of a leader, the first one in and the last one out but I think first and foremost I’m a very personable guy. I think I can make connections with people of all backgrounds and I think that’s meaningful with the position I play.”

Those qualities helped make for a memorably unified environment at Temple that remained constant despite many coaching changes in Russo’s time with the Owls. Russo went 16-10 as the starter, finishing third in program history in completions (536), passing yards (6,292) and passing touchdowns (44).

“I think in my time at Temple when coaches left, instead of a bunch of guys going into the transfer portal and leaving, we kind of became closer in the locker room and the bond we had within the team tightened and I think that allowed us to be better on the field,” Russo said.

“That’s what stuck out to me was the camaraderie and unity we had in the locker room.”

All of that transition not only helped Russo to become a stronger quarterback from a mental perspective, but also required him to learn a host of different concepts from different offenses, something that will also help him adapt as he prepares to make the jump.

“A lot of my responsibilities at the line of scrimmage were mostly in the run game,” Russo said.  “This past year at Michigan State, our big thing was any time we got blitzed, we wanted to check zone away so I was constantly looking for blitzes, looking to check run plays away from the blitz and then in my time at Temple, it was more of man-beaters.

“If we saw we were getting man coverage or that we were outnumbered in the box, then we wanted to take advantage of our matchups on the outside,” he continued. “So I think in the systems I’ve played in, they’ve differed a little bit with the run game and pass game stuff but I feel like I’ve always been given a lot of freedom, something I’ve enjoyed and taken a lot of responsibility in.”

Russo has made use of the offseason to train with Tony Racioppi, who also works highly-touted quarterback prospect Kenny Pickett. Russo is also a former baseball player, so there’s been a lot of focus on getting right with lower-body mechanics.

Playing quarterback well and maintaining a high level of accuracy starts from the ground up, so this is an area of high importance for Russo, especially.

“With Tony, the biggest thing that I’ve been working on is staying balanced through throws, keeping my front shoulder closed and, being an ex-pitcher, I’ve always been taught to really drive off my back leg and try to get power on the throw,” Russo said. “The more I work with Tony, the more I realize that’s not what you want to do, you want to keep that weight back and really engage the core and the hips. I feel like I’ve been able to do that and I want to continue to become more consistent at that and get better at that.”

Russo also says he’s taken advantage of being around quarterbacks who have experience with NFL teams like Nate Stanley and Tim Boyle, who also train with Racioppi.

“The place I want to improve even more on – and we’re fortunate enough to have a couple of the NFL quarterbacks here – just kind of picking their brains and figuring out what their responsibilities at the line of scrimmage are, what their play calls are like, how it’s different getting the play call through the headset in the helmet,” Russo said.

It will be interesting to see where Russo gets a chance to show he can hang with an NFL team after the draft this month.