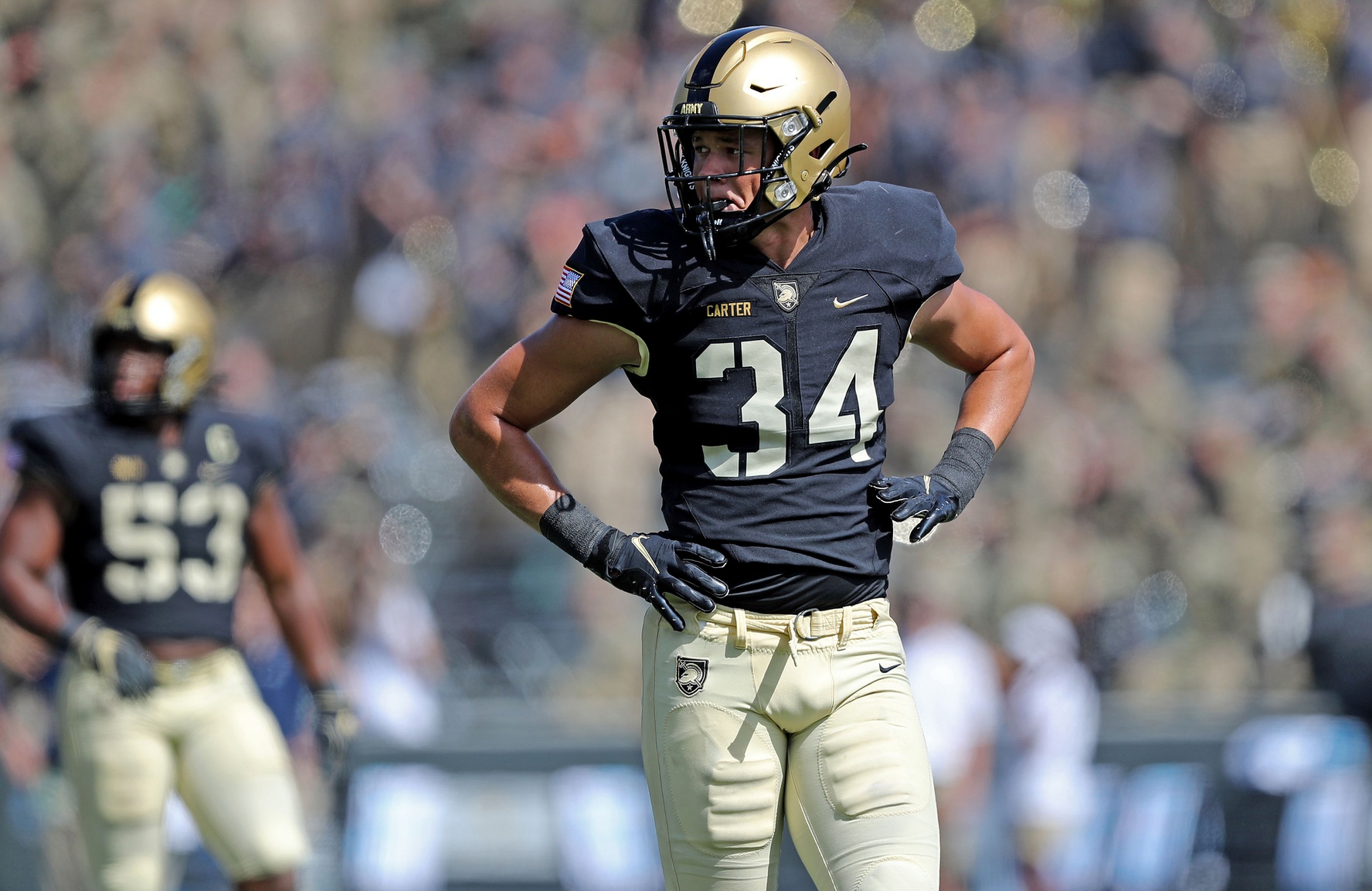 Andre Carter II On His Goals Ahead Of 2023 NFL Draft

The 2022 NFL Draft was loaded with high-end EDGE defenders. Travon Walker, Aidan Hutchinson, and Kayvon Thibodeaux were blue-chip prospects that were all drafted within the first 10 selections. An early look at the 2023 draft promises more of the same, with Alabama’s Will Anderson spearheading another potentially top-heavy group. Army’s Andre Carter II is another impressive pass-rushing prospect that is earning rave reviews from scouts this summer.

A versatile playmaker, Carter has gone from recruiting afterthought to a one-man wrecking ball, establishing himself as one of the most intriguing defensive prospects in the 2023 NFL Draft class. Carter recently spoke exclusively with The Draft Network regarding his breakout 2021 campaign, potentially making history as the highest-drafted service academy player in 60-plus years, his developing pass rush arsenal, why he will debunk the “small school” narrative, his offseason training regimen, and so much more.

JM: You recorded 15.5 sacks last season. You finished second in the entire nation in that category behind Alabama’s Will Anderson, who’s a potential No. 1 overall selection in the 2023 NFL Draft. How do you reflect on your breakout 2021 campaign?

Andre Carter II: I thought I had a good season in 2021. Collectively, we had a few good wins as a team. Beating Air Force is always a big one for us. We beat Missouri. That was the first time we beat a Power 5 program since I’ve been here. I was definitely encouraged by last season, both collectively and individually.

We had a good season, but losing to Navy is never a good thing for us (laughs). That haunts us going into this season, and certainly provides added motivation. That’s something we’re trying to course correct in 2022.

JM: I’m curious to hear what the next step is for you. What have you been working on this summer as you prepare to become a more complete and well-rounded player and pass rusher?

JM: No service academy player has been drafted in the top two rounds since 1959. The highest-drafted player from a service academy in the Super Bowl era is Napoleon McCallum, who was drafted at No. 108 overall in the 1986 NFL Draft. Is it a goal of yours to end that drought?

Andre Carter II: It definitely is. Playing in the NFL and getting drafted rather early has been a goal of mine since I was a little kid. I’ve always wanted to play in the NFL. It’s definitely something I’m striving for as we speak. God willing, it’s something I plan to do. I’m looking forward to that when the time comes.

JM: How would you describe your pass rush arsenal at this point in time? I’m looking for go-to moves, counters, and so on.

Andre Carter II: I’d start by saying I was much more polished this past season than I was in 2020. I definitely showed improvement, especially when it came to having a pass rush plan. I knew more of what I was doing going into every rep.

I feel like the most important aspect of rushing the passer centers around getting a great get-off. Everything sets itself up after that. Whether it’s beating the tackle around the edge with a speed move when he’s too deep in his vertical set or converting speed to power, it all starts with a great get-off. I’ve had some success with that.

JM: Do you feel you’re more effective rushing the passer from a two or three-point stance?

JM: What do you think ultimately led to the significantly more productive season in 2021?

Andre Carter II: I would credit becoming a full-time starter first and foremost. I didn’t earn that right during my sophomore season. I appeared in every game, but I only made two starts as a sophomore. Becoming a full-time starter paired with getting more experience led to my breakout season. I became more comfortable and confident as the season went by. That also played a big role in my success.

JM: Attending West Point can offer up certain life lessons most men your age don’t receive in college. What are some of the biggest lessons you’ve learned at West Point?

Andre Carter II: Two lessons immediately come to mind for me. The biggest is resiliency. Army has taught me to never give up and always keep fighting. You have to keep pushing through, even when you’re down on your luck. It will always work out in the end.

Secondly, I’ve learned to always value where I’m at, especially with me being here at West Point. It’s such a blessing to attend this prestigious institution. Not a lot of people receive this opportunity. I’m very fortunate. I know a lot of people would love to be in this position. Even when the going gets tough, I really try to remember that I’m very blessed to be in this situation. I never want to take it for granted.

JM: That’s a terrific point. As you prepare to enter such a crucial situation for yourself, some analysts will refer to you as a “small school” prospect despite the fact you sacked Malik Willis and Liberty in 2021, and you also recorded sacks against Wisconsin and Missouri this past season. How do you respond to that discourse?

Andre Carter II: I just have to respond on the field. My on-field play will take care of that. For me, I’m used to being counted out. I’ve been counted out since high school. I didn’t have any stars or offers or anything like that coming out of high school. I wasn’t recruited in that manner.

Whenever we play against an opponent, I’m reminded that most of them never bothered to look my way. It helps me always play with that chip on my shoulder. All of these teams passed up on me. I feel like I can play alongside anybody in the country. I’m not concerned about that at all.

JM: As a follow-up, what makes your game unique and why will your skill set translate to Sundays?

Andre Carter II: I have a lot of length, which is always desired by a coaching staff. It allows me to rush the passer. It also lets me drop into coverage with great effectiveness. Having played receiver for most of my life, I feel like that helped me develop my overall quickness. My length and agility are going to translate to Sunday.

JM: I’ve really appreciated your time today. In closing, what are your goals for the 2022 season?

Andre Carter II: The biggest goal is to win that CIC (Commander-in-Chief) Trophy. We have to beat Air Force and Navy (laughs). Secondly, we’d love to go undefeated. I don’t believe we’ve ever accomplished that goal here at Army, and if we did, it was like 100 years ago. Going undefeated would be pretty remarkable. Those are definitely my two biggest goals for this upcoming season.