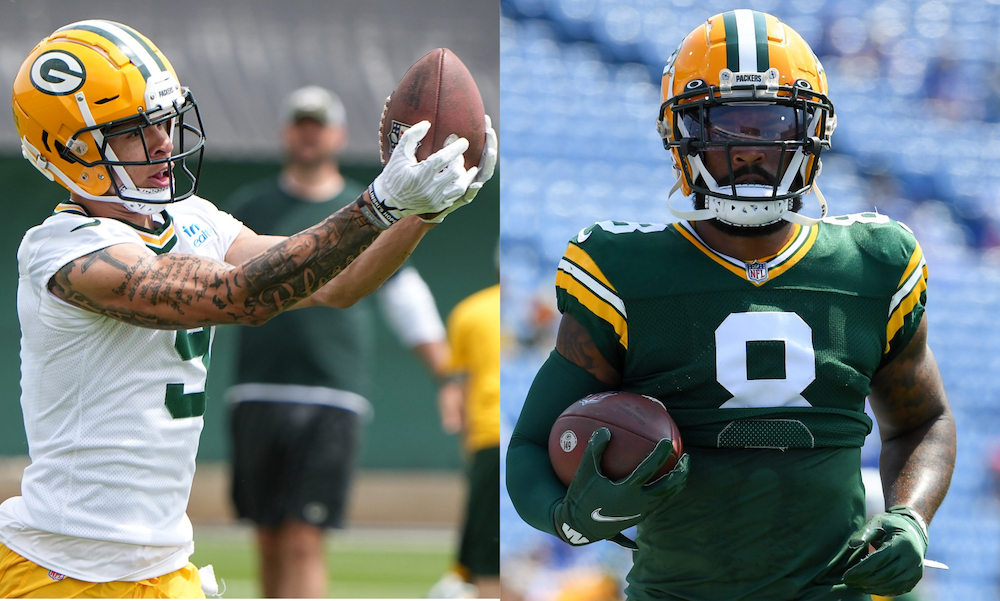 These 2 Packers WRs Are Poised For Breakout Seasons

Things will look a little different for the Green Bay Packers this year. Yes, Aaron Rodgers is still in place, the core on defense remains intact, and Matt LeFleur is still calling the shots, but the departure of Davante Adams has inherently provided a facelift at the wideout spot for the future first-ballot Hall of Famer under center. A group of veterans littered with first-year talent expected to produce, the Packers’ unit of pass-catchers fails to move the needle in comparison to the league’s most fearsome wideout rooms. Any of Allen Lazard, Sammy Watkins, Randall Cobb, or rookie Romeo Doubs could holster a substantial role in the passing game this season, but my eyes fall solely on the potential breakout of two talents on the perimeter: Amari Rodgers and Christian Watson.

As we begin to break down two athletes with varying skill sets, let’s start with Rodgers. While Adams’ vacancy holstered headlines, the team also lost Marquez Valdes-Scantling to the Kansas City Chiefs, which has left a heavy amount of targets open for the second-year talent—Rodgers amassed just eight last fall after Packers General Manager Brian Gutekunst used a third-round pick on the former Clemson standout. A stoutly-built talent molded in the frame of a running back at 5-foot-9, 212 pounds, Rodgers will battle with Cobb to start in the slot. If spring workouts are a sign of what’s to come, he could develop into one of the league’s highest targeted pass-catchers within the intermediate areas of the offense with Adams’ 169 targets in 2021 now up for grabs.

An above-average athlete with outstanding short-area quickness, although Rodgers was relegated to more of a special teams role in his first season with Adams, Valdes-Scantling, and Lazard holding down the fort on the perimeter, teams don’t use third-round picks on pass-catchers to return kicks. Not for long, at least. LeFleur expects him to be heavily involved this fall, and for you fantasy gurus out there, I wouldn’t be shocked if he finds himself involved early and often in the Packers’ game plan from Week 1.

When it comes to Watson, you couldn’t find a media member higher on the former North Dakota State standout than myself throughout the pre-draft process. A smooth-moving talent at 6-foot-4, when I heard a comparison during the winter that Watson reminded a scout of Randy Moss, I had to turn on the film and believe it with my own eyes. An imposing athlete that uses all of his chiseled frame to his advantage, Watson became a late headliner within a loaded pass-catching class this spring after dynamic performances at the Senior Bowl and NFL Combine, where he recorded a 4.36 40, 38.5-inch vertical jump, and an 11-foot-3 inch broad jump that ‘wowed’ those in attendance.

While I’ll hold off on comparing the second-round pick to one of the greatest wideouts to ever strap up in Moss, microscoping Watson as a potential high-volume receiver in year one isn’t rocket science—Green Bay will rely on him early in 2022. Although it’s been difficult at times for Watson to maneuver out of his own way this spring, struggling with drops during offseason team activities, we’ve been through this before—if you’re looking for someone to overreact to a few drops in May practices, you won’t find it here.

A unique blazer for his size, Watson is able to win a multitude of ways and was utilized as such within the Bison offense that averaged a tick over 35 points per game. Flexed out primarily as the X receiver in the high-flying NDSU offense, what makes Watson such an intriguing talent in Green Bay—especially with his athletic profile—is the number of ways he can provide an impact. A vertically imposing threat where eyes are drawn to him solely for his mold and makeup, Watson’s burst and ability to glide past secondary defenders is a trait unseen from many of today’s pros with a build similar to that of Watson. While teams looked to double and bracket him throughout his time in the college ranks, to avoid the onslaught of bodies, his positional versatility allowed him to slide inside to the slot, handle manufactured touches in the backfield, and, just for icing on top of the cake, slide back on special teams as a punt and kick returner, where Watson was named a ‘20 FCS First-Team All-American. As smooth an athlete as they come with long, outstretched strides that eat up grass with ease, and a talent blessed with an excellent catch radius, body control, and aforementioned versatility to boot, the stratosphere remains the glass ceiling if he can put it all together.

Two pass-catchers with expectations aplenty as we approach Packers training camp, while the connection of Rodgers to Adams over the last eight seasons proved to be one of the NFL’s most elite tandems to ever grace professional football, it’s next man up in Green Bay and the duo of Rodgers and Watson are first in line.