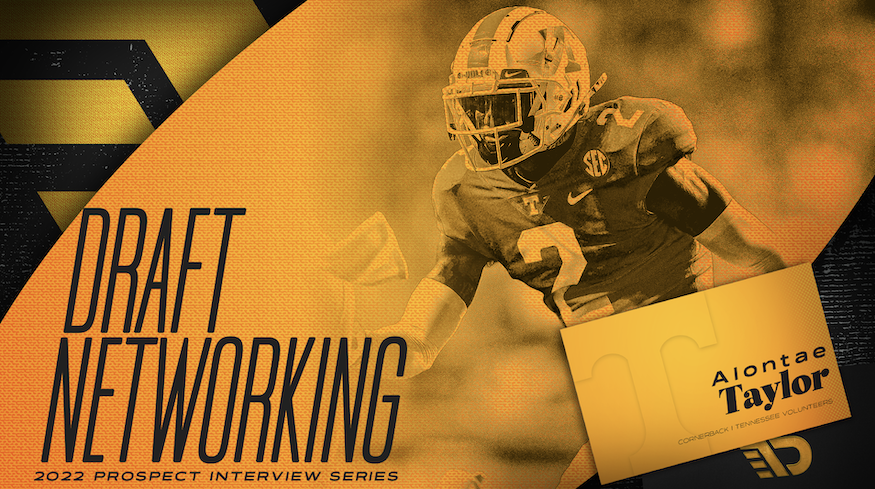 Tennessee’s Alontae Taylor is one of the most intriguing cornerback prospects in the 2022 NFL Draft. The 6-foot, 199-pound Taylor enjoyed an eye-popping NFL Scouting Combine by running the 40-yard dash in a blazing 4.36 seconds. It appropriately built upon an impressive Senior Bowl showing and final collegiate campaign that saw Taylor record career-highs in total tackles (60), interceptions (two), and passes deflected (six). A former wide receiver-turned-cornerback, Taylor has been one of the more consistent defenders in the ultra-competitive SEC over the previous four campaigns.

Taylor recently spoke exclusively with The Draft Network regarding his combine performance and experience, the transition from receiver to cornerback, how he approaches bigger receivers in coverage differently than smaller, shiftier ones, and so much more.

JM: I thought you had an excellent season in 2021. You essentially recorded career-highs in every statistical category. What changed for you this past season?

AT: My confidence level definitely skyrocketed heading into the season. We had made a coaching staff change. The new staff brought a defense to the table that better suited my skill set and abilities. I quickly bonded and got on the same page with our new staff. They allowed me to play freely. I didn’t have to think too much about what was going on. It allowed me to play fast, decisive and physical.

JM: You made the transition from wide receiver to cornerback in 2018. What was that transition like, and how does your background as a receiver give you an advantage in coverage?

AT: It was a difficult transition at first. I essentially went from running forward and knowing exactly where I’m going to learning how to backpedal and react to what’s happening in front of me. It takes time to get used to that. My receiver background started helping me during my junior and senior seasons. I started to realize what receivers were doing and how they were attacking me in coverage. I didn’t have to think as much about my own responsibilities because I became more confident in my defense and what I was doing at the position.

JM: That makes a ton of sense. You had a big combine that was highlighted by running a 4.36 in the 40-yard dash. It’s an especially terrific time when taking your size into account. Do you feel like you surprised some people in Indianapolis?

AT: I feel like I definitely surprised some people. During some of my formal and informal meetings, a few coaches asked me what I thought I was going to run and I consistently responded with 4.38 and I actually ran 4.36 as you said. I worked really hard for that result. I have to give kudos to the EXOS team out in Arizona who helped train and prepare me. We got my body right to the point where I went out there and shocked everybody.

JM: You shocked a lot of people in the greatest way imaginable. You mentioned meeting with teams at the combine. I want to touch on that process, and do you have any virtual or top-30 in-person visits coming up?

AT: I’ve been able to meet with a lot of teams throughout the process. We’ve been talking about football. I’ve been doing some Zoom meetings and I have some in-person visits on my schedule as well. I’ve really enjoyed the process. Teams are reaching out to me and getting to know me on a more personal level. I’m keeping those details under wraps during this time, but I’ve definitely spoken with a bunch of teams and will continue to do so leading up to late April.

JM: That’s terrific news. What was the strangest question a team asked you at the combine?

AT: There was this one team that asked me about the game room that I had at my ex-girlfriend’s house. I had a little room there where I would watch a lot of game film and study our upcoming opponents. That was kind of weird I guess because I have no idea how they knew that room existed (laughs). That was definitely the weirdest question.

JM: That’s hilarious. NFL teams know all! When I turn the tape on, I see a cornerback that embraces the physical aspects of the game. You love to tackle and get physical. How did you develop that mindset?

AT: I played some quarterback in high school. I never wanted to go down easily (laughs). I’ve always had that edge about me. Going into college, making that switch to defensive back, I knew I had to be physical as well. I had to be even more physical than I initially planned on being (laughs). Over the years, I just developed the mindset that I was going to get them before they got me. I wanted to initiate contact and control the rep. I just carried that mindset and approach with me. I applied that to become a physical player. I don’t back down from a challenge. It doesn’t matter if it’s a receiver, an offensive lineman, or whoever.

JM: It really stands out on tape. Tennessee mixed their coverages. It gave you a ton of experience in press, zone, and off-man. Which is your favorite?

AT: I’m a press-man cornerback at the end of the day. I love getting my hands on guys and challenging them at the line of scrimmage. It allows me an opportunity to use my length and size. That’s definitely my favorite coverage to play.

JM: I want you to expand a bit on Tennessee’s defensive scheme and how the coaching change benefited your trajectory. You touched on that earlier.

AT: With the previous staff, we had a lot of checks going on. We had a lot to think about and a lot more to see than maybe you should be able to from your position at cornerback. This past season, we made the call and we played it out. It allowed me to play fast and physically. I was able to better focus on my responsibilities and my technique. We didn’t have to see or think too much.

JM: Your varying experiences have prepared you. Do you approach a bigger, more physical receiver in coverage differently than you do a smaller, shiftier receiver?

AT: Yeah, I definitely do. My film study plays a huge role in that decision-making process. I might switch up my technique a little bit. I can play press-man or off coverage depending on what I see. I understand that guys struggle to beat me deep. A bigger receiver, I might not back up as much and I like to get my hands on him early throughout the rep. With those smaller guys, I might give them a bit more ground so that I can have that edge to step up on them when necessary.

JM: What are three traits a cornerback must possess in order to be successful?

JM: This has been a terrific conversation, Alontae. You’re one of the most athletic and exciting cornerbacks in the 2022 NFL Draft. I’ve really appreciated your time today. What kind of impact is Alontae Taylor going to make at the next level?