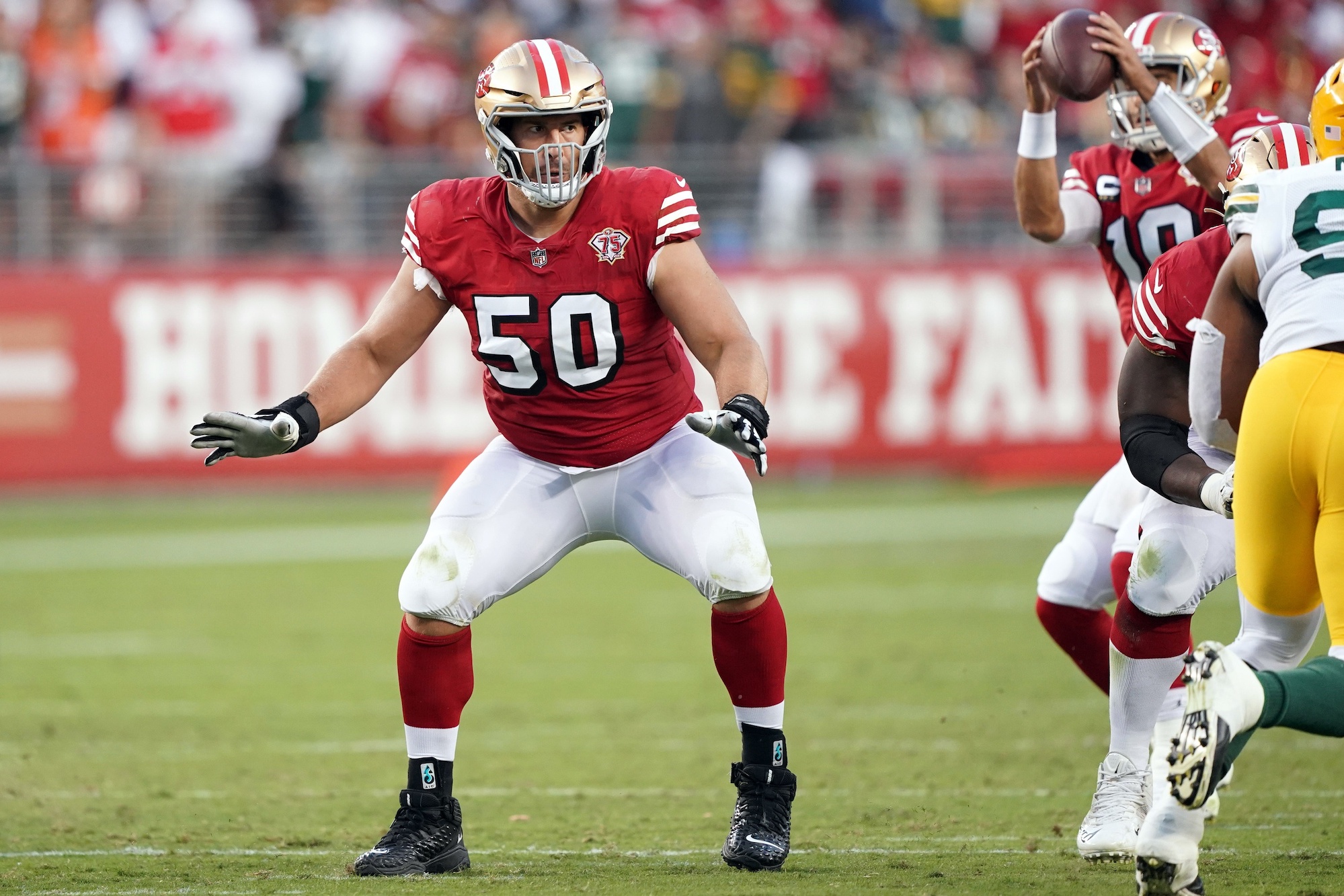 San Francisco 49ers veteran center Alex Mack officially announced his retirement from the NFL this week. Mack enjoyed an illustrious 13-year career and continued playing at a high level until the very end.

Mack earned a Pro Bowl appearance in 2021 en route to helping the 49ers qualify for the NFC Championship Game. Mack’s departure leaves the 49ers with a sizable hole at center and the current internal candidates leave plenty to be desired.

One of those candidates may be rookie offensive lineman Nick Zakelj, who the 49ers drafted with the No. 187 overall selection in the sixth round of the 2022 NFL Draft. Zakelj was a four-year starter at left tackle for Fordham that was always expected to kick inside at the next level. That transition is underway, and with Mack’s retirement now official, he should receive extra looks at center throughout organized team activities (OTAs), training camp, and the preseason.

However, Zakelj is facing a steep transition. It would be a major surprise if a small-school, day-three rookie that’s changing positions served as the answer to San Francisco’s newly created dilemma at center in 2022. Dohnovan West, an undrafted free agent rookie out of Arizona State, is also on the roster.

The 49ers could turn to veteran Daniel Brunskill in their time of need. An undrafted free agent out of San Diego State in 2017, Brunskill has spent the previous three campaigns in San Francisco after previously impressing with the AAF’s San Diego Fleet. Brunskill started all 16 games for the 49ers in 2020 with an even split of eight games apiece at guard and center.

The San Diego, California native however abandoned his duties at center this past season once Mack arrived via a three-year contract. Brunskill started all 17 games at right guard and was just beginning to get comfortable in one role. Uprooting that newfound comfortability while forcing Brunskill to make yet another position switch could potentially risk the development he’s made as a professional, all the while creating another hole at guard.

The 49ers also re-signed backup center Jake Brendel earlier this offseason. Brendel is a veteran journeyman that’s played for five teams in six seasons since entering the league as an undrafted free agent out of UCLA following the conclusion of the 2016 NFL Draft. He played six offensive snaps for the 49ers last season. Brendel has three career starts under his belt and is not the answer.

When exploring the possibilities of Brunskill, Zakelj, and Brendel, none qualify as particularly straightforward or even desirable. Before exiting, Mack agreed to a reworked contract that creates approximately $4 million in additional cap space for the 49ers. 49ers General Manager John Lynch could attempt to use a portion of this newfound flexibility to upgrade the situation at the center, but additional movement would be required in order to land a true difference-maker given their frugal cap situation. J.C. Tretter, who the Cleveland Browns released earlier this offseason, should be an obvious target, but it would likely take something around $7+ million annually to lure him to San Francisco. Matt Paradis could be an alternative lower-cost option, but it’s worth noting he tore his ACL in Week 9 last season.

Finding adequate center play in the wake of Mack’s departure can be viewed as crucial to San Francisco’s offensive success in 2022. Head coach Kyle Shanahan operates a run-heavy system that places a ton of emphasis on receiving high-quality center play. It becomes that much more important when taking their quarterback situation into consideration. Sophomore quarterback Trey Lance is expected to take over under center as the 49ers continue attempting to offload Jimmy Garoppolo. Lance entered the league as a raw product and despite having a year of experience under his belt (predominantly as the backup), he very much remains a work in progress. Pairing him with a veteran center that could lend him a helping hand as he continues acclimating to the league is of the utmost importance for all parties involved.

Mack’s retirement has created a problem in San Francisco and the appropriate answer is unlikely to reveal itself within the four walls at Marie P. DeBartolo Sports Centre.