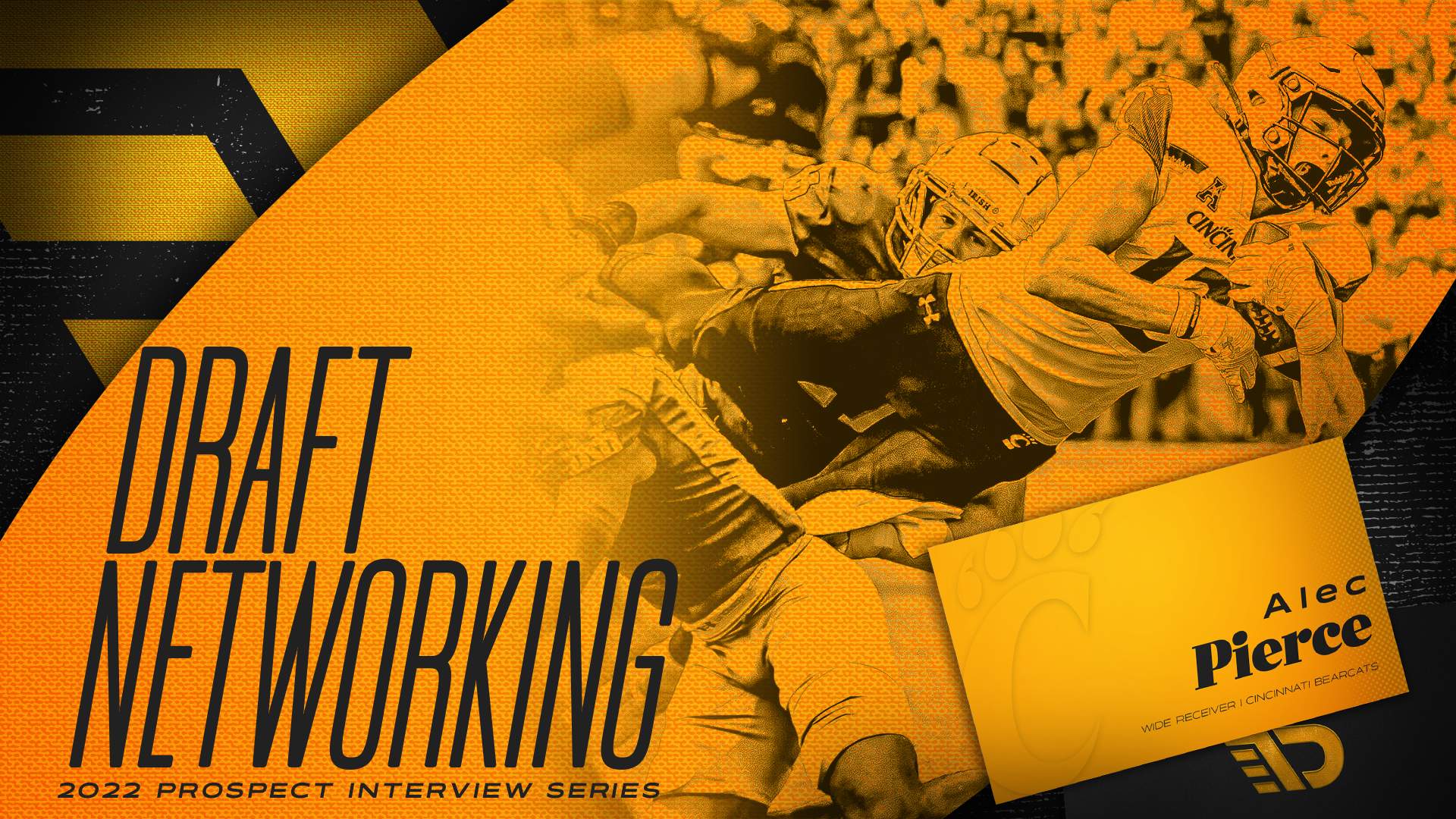 Every year, several NFL draft prospects improve their stock at the NFL Scouting Combine. Few receivers can claim they enjoyed a more successful week at the combine than Cincinnati’s Alec Pierce. The 6-foot-3 vertical playmaker ran the 40-yard dash in a blazing 4.41 seconds, broad-jumped 129 inches, and recorded a vertical jump of 40.5 inches. All three results contributed to an elite RAS score of 9.62 as Pierce surely shot up multiple draft boards in the process.

Following his combine performance, Pierce spoke exclusively with The Draft Network regarding his standout showings in Indianapolis, his favorite route to run, why Desmond Ridder is the best quarterback in the 2022 draft, and so much more.

JM: You took a significant step forward in 2021 by recording career-highs in receptions (52), yards (884), and touchdowns (8). What changed for you in your final season as a Bearcat?

AP: I think I definitely matured throughout my final season. I had more experience and years under my belt. I worked myself into a more prominent position as a player that earned some status at the program. I became that go-to guy. I was prepared to take that step during my junior year but I suffered an unfortunate injury that set me back. I was healthy and I became the to-go guy on offense in 2021. Those were the biggest differences for me this past season.

JM: You played a role in Cincinnati’s culture change under coach Luke Fickell as the program has experienced a ton of success in recent seasons. How would you detail the steps taken forward and why the program continues to thrive?

AP: Coach Fickell and his staff did a great job emphasizing local recruits. Early in their tenure, there wasn’t going to be much of a draw for them to attract recruits from Florida, Georgia, Texas, and places of that nature. They really focused on trying to win the local battles and they landed some big-time players. They’ve really built the program around that and we had some great players. They’ve done a wonderful job developing that talent as well.

I missed the very beginning of their tenure, but I’ve always heard that the culture began changing from day one of the coach Fickell era. I guess they had a lot of work to improve on from the previous staff. Once guys began buying in, we saw that culture change, and things began going a lot smoother.

JM: That’s a great point and thorough answer. The NFL Scouting Combine is officially in the books. You had a terrific week. You ran the 40-yard dash in 4.41 seconds and produced excellent results in the broad jump (129 inches) and vertical jump (40.5-inches) as well. Those are some incredible numbers, especially when taking your size into consideration. What was your overall experience like?

AP: It was a great experience. I grew up watching the combine and I loved paying attention to the testing numbers. It was a chance for me to live out my lifelong dream. I’ve always wanted to participate in the combine. I was pleased with my testing results. I have to give credit to Yo Murphy. I’ve been training with him down in Tampa Bay, Florida. He really prepared our entire group down there. Everyone at our training facility tested in an outstanding manner. Murphy is wonderful at his job and he’s undeniably one of the best in the business.

JM: You put forth an incredible performance. Do you feel like you improved your draft stock in Indianapolis?

AP: That’s up for teams to decide and they’re going to hold that information close to the chest. My performance definitely didn’t hurt my draft stock (laughs). It depends how much stock teams put into the performance. I definitely had a great week. If anybody had doubts about any part of my game, or about my athletic abilities, I believe I positively addressed those questions in Indianapolis. I would say I improved my draft stock.

JM: Which teams did you meet with formally throughout the week, and how do you feel your meetings went?

AP: I had a formal meeting with the Tampa Bay Buccaneers. All of my meetings went well. It was cool to get up there and meet the head coach, the general manager, the offensive coordinator, and whatnot. I met with a bunch of teams informally as well. I nearly met with every team. It was cool to meet all of those guys. You end up running into a lot of names that you’ve heard before. I met with the Dolphins and their receiver coach is Wes Welker. It’s like no way?! (laughs).

Football is a small world. You meet with coaches and just about every team you meet with knows you in some capacity. One of their friends coached you in college, or they know you through a former teammate or something along those lines. It was a great experience and I enjoyed every second of it.

JM: We love hearing that. What was the strangest question a team asked you at the combine?

AP: Nobody asked me anything super strange. You always hear those funny stories of prospects getting asked something weird but that didn’t happen to me. I don’t know exactly what it was, but maybe they didn’t have enough time to get into that. Things definitely moved along quickly. They had to focus on getting to know us as players and prospects. I’ve heard some stories in the past but I didn’t hear anything like that this year.

JM: On tape, I see a receiver with the size, speed, and ball skills to consistently win vertically down the field. How did you develop that aspect of your game?

AP: I think I’ve been developing those skills my entire life. I played a bunch of different sports growing up. When I think of my ball-tracking abilities, and my ability to high-point the football, I think back to playing basketball and a ton of volleyball. Volleyball requires a ton of hand-eye coordination when you’re going up and hitting the ball at its highest point. I attribute all of that to my diverse background in sports. I’ve developed a competitive nature over the years. I grew up in a family of all boys and we played a ton of sports. It’s always been a part of me.

JM: That’s a great point. How did playing in that Cincinnati offense help prepare you for the next level?

AP: I think playing at Cincinnati helped me tremendously. Early on, they asked me to do some things that are going to translate well to the NFL level. During my freshman year, I made my mark by playing almost exclusively on special teams. That was how I contributed as a freshman. If you talk to anybody in the NFL, they’ll tell you that playing special teams is one way to stick in the league.

Some guys end up making a living on special teams. Unless you’re a superstar, you have to play special teams as a rookie. It’s super important early on in your career. Offensively, they asked me to do a lot of different things. I was asked to crack down on linebackers in the run game. I played off the backside of the edge on running plays and blocked defensive ends. I’ve done a bunch of different things even outside of catching passes as a receiver. I’ve done things other receivers haven’t done.

If you watched our film and compared it around the league, a lot of teams are running offenses like that. You see what the Los Angeles Rams do, I know we incorporated some of their plays into our playbook. They get their receivers heavily involved in the blocking game as well.

JM: Those are some excellent examples. Do you have a favorite route to run?

AP: I’d probably say that a post route is my favorite route to run. I love running these deep-developing routes. The post route allows you to do something a little extra with that. I ran a ton of post routes during my sophomore season. It allows me to run at the defender with speed. He doesn’t know if you’re going to break outside or what you’re going to do. I can just stick my foot in the ground violently and give him a little shake at the top while bursting out of that. It’s a tough route to defend.

JM: You run that post route at such a high level. What can you tell me about Desmond Ridder the quarterback, and perhaps more importantly, what’s he like as a man and as a leader?

AP: Des is an incredible leader. He was definitely the leader of our team this year. When he announced he was coming back to Cincinnati for an additional season, that was huge for us. We were so thrilled. He’s a great guy both on and off the field. We’ve become extremely close friends.

You can analyze the tape and the numbers for yourself. He’s a winner. He was near the top of the quarterback wins category. He can do everything. You’ve seen it on tape. He’s a playmaker. If the pocket breaks down, he can win with his feet. He can make throws on the move. The sky’s the limit for him. He’s an incredible player and an incredible leader. He’s definitely the best quarterback in the draft class.

JM: We love that. I’ve really appreciated your time today. I feel like this conversation has highlighted why you’re one of the most exciting and dynamic big-play receivers available in the 2022 NFL Draft. What kind of impact is Alec Pierce going to make at the next level?

AP: I’m going to make an immediate impact for the team that drafts me. I’m going to carve out a role for myself while helping my team win football games.