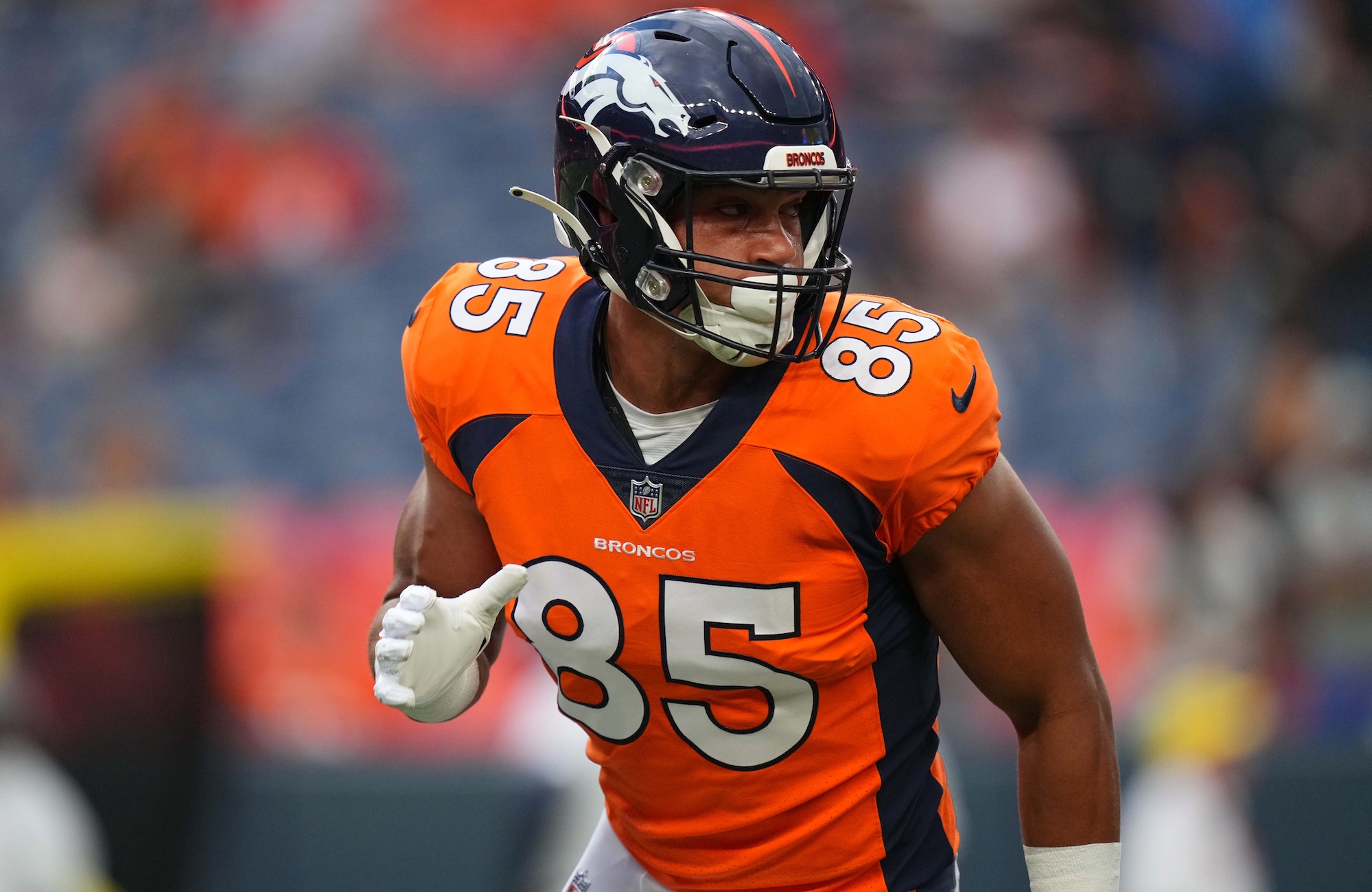 3 Teams That Should Trade For Albert Okwuegbunam

The Denver Broncos are fielding calls on potential trade opportunities for tight end Albert Okwuegbunam, according to multiple reports. Okwuegbunam is garnering interest ahead of the league’s Nov. 1 trade deadline. The Broncos may realistically consider trading Okwuegbunam should the appropriate offer arrive.

The Broncos roster currently has three additional tight ends (Eric Saubert, Andrew Beck, and Eric Tomlinson). Saubert has contributed when healthy. The Broncos can’t hold onto five tight ends, so something has to give.

The Buccaneers have struggled to generate production from their tight ends in the wake of losing Rob Gronkowski to retirement. Cameron Brate leads all Buccaneers tight ends with just 13 receptions for 114 yards (8.8 yards per catch). Brate ranks fifth among all Buccaneers pass-catchers in receiving yards and receptions.

Brate was stretchered off the field with a scary-looking head injury in Sunday’s disappointing defeat to the Pittsburgh Steelers. Brate hasn’t practiced since and both his immediate and future availability hangs in the balance. The Buccaneers could consider acquiring a tight end such as Okwuegbunam.

Rookie tight end Cade Otton is poised to earn more snaps, but pairing Otton with Okwuegbunam would ensure the Buccaneers aren’t too invested in Otton down the stretch. Otton is beginning to emerge, but he’s still a first-year player that’s recorded just 12 receptions for 99 yards. General manager Jason Licht’s gamble on the aging Kyle Rudolph has backfired.

The Buccaneers remain in win-now mode.

It’s worth noting Smith has found the end zone twice on well-designed and executed play calls by head coach Kevin O’Connell. Smith has yet to record an explosive passing play (20-plus yards) this season. Smith ranks fourth on the Vikings in receptions and receiving yards.

Okwuegbunam wouldn’t offer the Vikings much as a blocker, but they roster No. 2 tight end Johnny Mundt for that purpose. Acquiring Okwuegbunam would increase the competition in Minnesota’s tight end room while providing Kirk Cousins with another high-upside option in the passing game. The 5-1 Vikings are racing toward the postseason and should consider buying talent ahead of the trade deadline.

The disappointing 2-5  Saints aren’t in a position to aggressively pursue upgrades at the trade deadline, but Okwuegbunam is more than a midseason rental. The No. 118 overall selection in the 2020 NFL Draft, Okwuegbunam is under contract through the 2023 campaign at the cost-controlled figure (a base salary of $1,010 million next season, via Spotrac) of a mid-round draft pick. That should intrigue plenty of teams, including the Saints.

Juwan Johnson will be a restricted free agent and 2020 third-round pick Adam Trautman hasn’t successfully applied his skill set to the next level. The Saints could use a more traditional tight end to pair with do-it-all offensive weapon Taysom Hill in 2023. Okwuegbunam could fit nicely into New Orleans’ future plans.