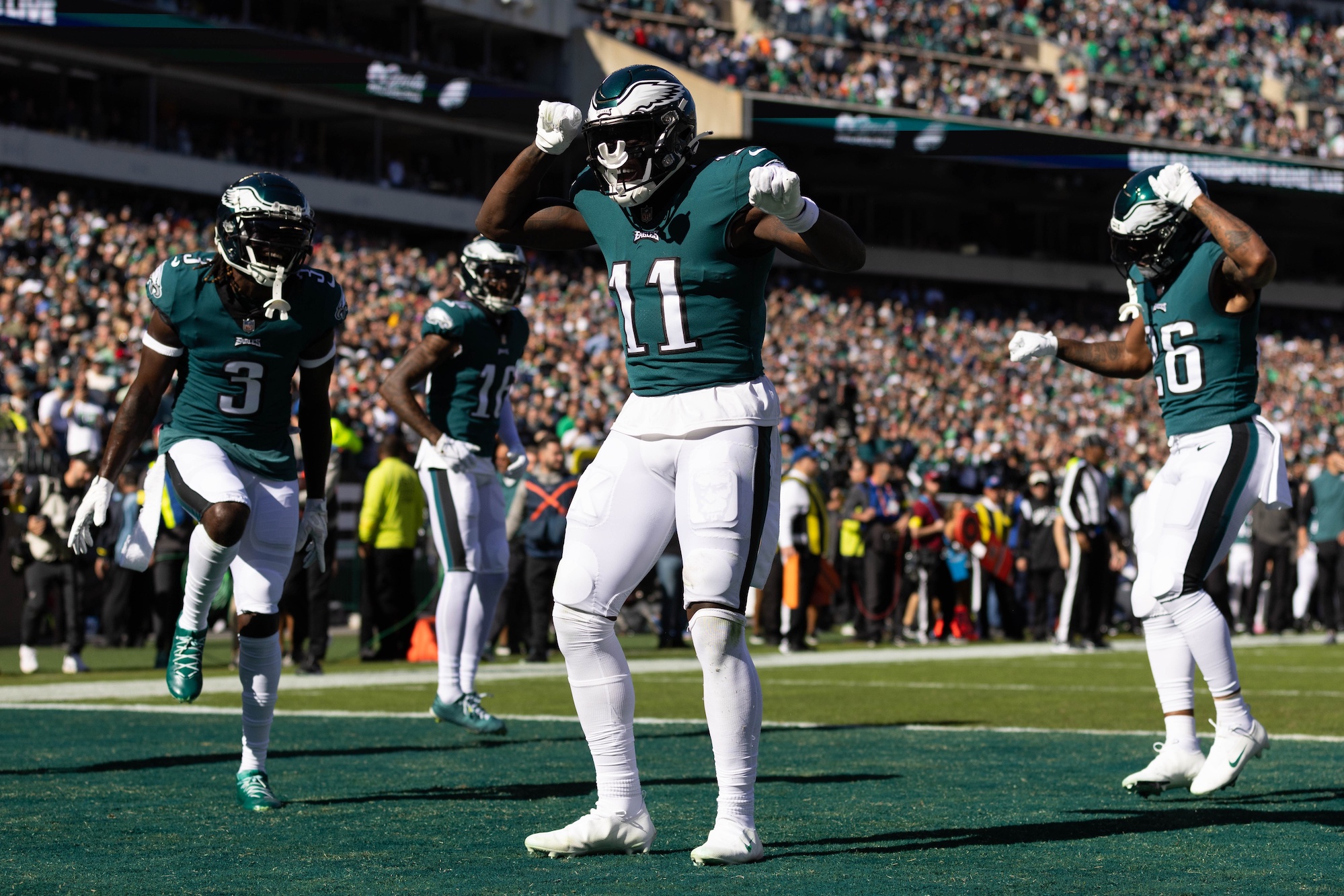 AJ Brown Everything And More For Eagles’ Offense

When the Philadelphia Eagles acquired wide receiver AJ Brown on night one of the 2022 NFL Draft, general manager Howie Roseman’s intentions were clear—he was all in. Now seven games into the season, and still without a loss, the addition of the big-bodied wideout into one of the league’s most explosive offenses has showcased an extremely dynamic quarterback-to-wide-receiver combo.

While last year’s first-rounder DeVonta Smith played well last fall and has continued to serve as a highly featured weapon for Jalen Hurts, Brown has become everything Roseman thought he’d be when he pulled the trigger in acquiring him in April. Averaging nearly 90 yards receiving and Philadelphia’s leader in every major statistical category, Sunday’s performance against Pittsburgh highlighted just how dominant Brown could be as the Eagles look to continue their hot streak.

The first Eagles receiver to record three receiving touchdowns in the first half since Kevin Curtis did so in 2007, Brown was completely unguardable on Sunday.

Jalen Hurts DIMED it to A.J. Brown for their second TD of the day 🪙

Brown was also the first player to score three touchdowns on go-routes since route classification was introduced in 2018—it only took Brown two quarters to do so. And although the Steelers’ secondary is nothing to be afraid of outside of the talented Minkah Fitzpatrick, you still have to produce, you still have to separate, and you still have to execute. Brown did everything right in Week 7 with five catches, 113 yards, and a trio of trips to paydirt.

Hurts also deserves a tip of the cap for his ability to dissect and pinpoint the football into tight windows throughout the afternoon. His trust in Brown to ‘go up and get it’ as someone who can play above the rim was evident all afternoon long.

Sure, seven weeks are now in the books and no one will say players are still getting their feet wet, but the relationship between Hurts and Brown has begun to flourish now almost two full months into the season. Rapport takes time, trust takes even longer. While Hurts is relatively new under center in comparison to some veterans around football, he’s figuring out how to win games in multiple ways spearheaded by Brown, a flat-out stud on the perimeter.

Now, the Eagles sit at 7-0 for the first time since 2004. With a defense firing on all cylinders with Robert Quinn now in the fold and an offense cooking with fish grease behind an MVP candidate in Hurts, the addition of AJ Brown has proved priceless for Roseman, who has built one of the most explosive rosters in football.