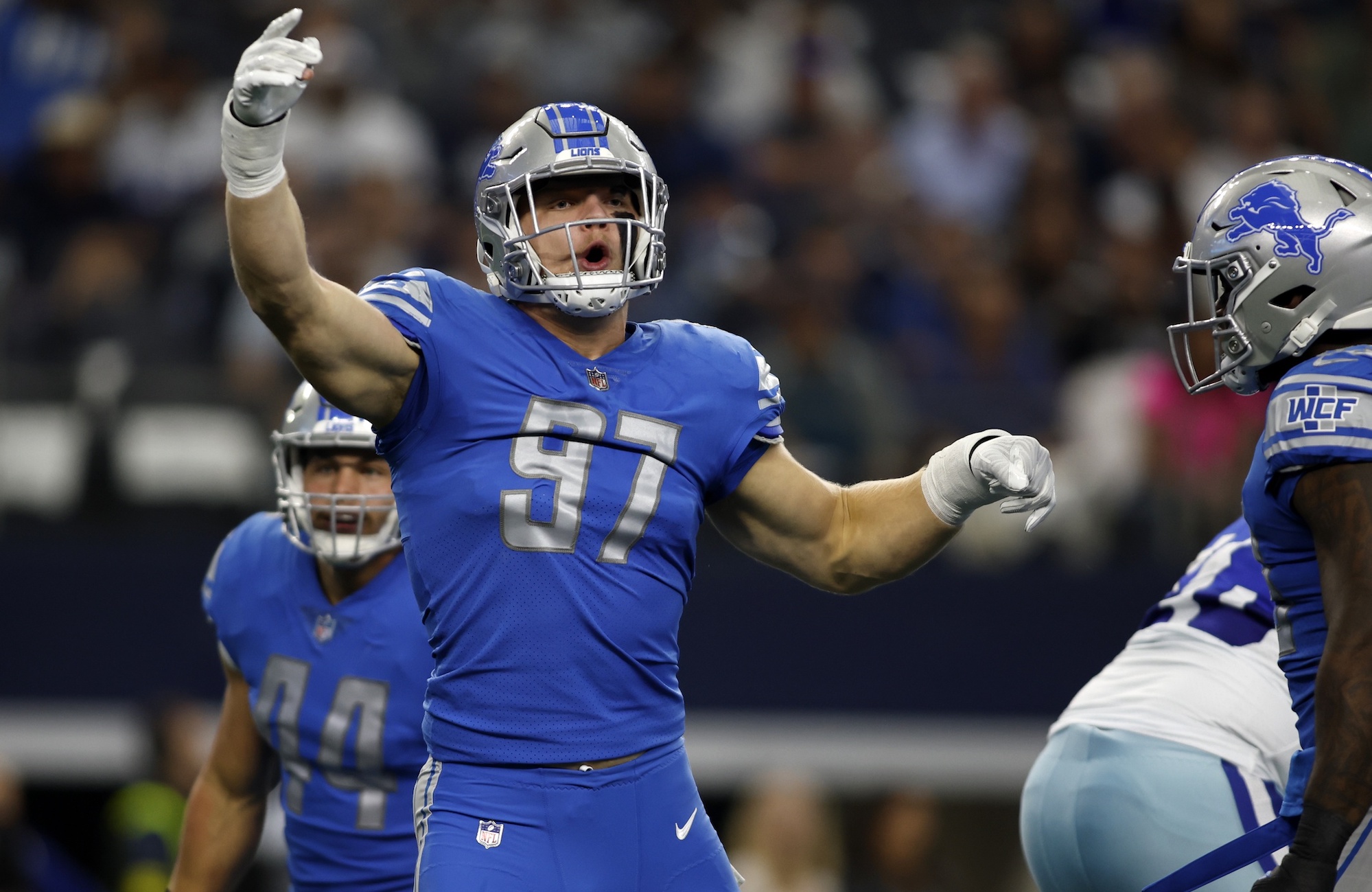 After a fantastic, three-sack performance against the Washington Commanders in Week 2, Detroit Lions rookie edge rusher Aidan Hutchinson wasn’t such a smooth criminal in the three games following. Maybe it was the bye week last week or the fact that he was playing another NFC East team, but in any case, Hutchinson returned with a vengeance with another huge game against the Dallas Cowboys on Sunday afternoon.

Coming into Sunday’s matchup with Dallas, the Lions were in desperate need of more defensive contributions across the board. They were tied for second to last in the NFL with just four takeaways in five games. They were dead last in the league with seven team sacks. Hutchinson had three of those sacks—and in a single game—with no other Lions defender responsible for more than one.

Unsurprisingly, that meant the Lions’ passing and scoring defense continued to sink to the bottom of the NFL. One of the biggest reasons for Detroit’s lack of defensive output was the fact that Hutchinson was held almost completely in check in the weeks following his breakout game against Washington. In the three games following his Week 2 performance, he didn’t record another sack or tackle for a loss. His three total quarterback hits in Weeks 3-5 matched what he had in one game against the Commanders, and the seven total tackles in that span were just one more than his Week 2 output.

That was the situation for the Lions as they entered their Week 6 bye and it was up to head coach Dan Campbell and defensive coordinator Aaron Glenn to make adjustments. Not only did they need to get their overall defense going, but Hutchinson in particular needed to step up as the centerpiece of the pass-rush attack the Lions hoped he’d be when they drafted him with the second overall pick. Coming out of the bye, they’d be facing an immediate test in a Cowboys offense that would see starting quarterback Dak Prescott return to action after five weeks out with a hand injury.

To their credit, the Lions’ defense—and Hutchinson especially—stepped up in a big way. The rookie edge rusher added another 1.5 sacks, three tackles, a tackle for a loss and three more quarterback hits to his career stats sheet in Dallas. Hutchinson’s 4.5 sacks on the season now match the combined total of the rest of his teammates and put him among the league leaders in sacks this season.

Hutchinson’s 1.5 sacks on Sunday came on some impressive plays from the rookie, plays that arguably did a better job showing off everything he’s capable of than his three sacks against Washington.

His first (half) sack came early in the game on a big third-and-long stop for the Lions that started to set the tone for an improved Detroit defense out of their bye week.

Aidan Hutchinson with his 4th sack of the season 💪

Hutchinson raced upfield soon after the snap, getting the jump on fellow rookie first-rounder and Cowboys left tackle Tyler Smith. He ripped under Smith’s arm fighting through what was almost a headlock from the lineman, then bullied his way past tight end Dalton Schultz, who had come to help Smith fend off the rusher. Hutchinson then latched onto the back of Prescott’s jersey and started to bring him down with one hand before linebacker Alex Anzalone helped out with a shove. Raw strength, good technique, and the constantly present high motor from Hutchinson combined for a really nice play from the rookie.

Hutchinson’s other sack of the day was another impressive show of his talent from the other side of the defensive line.

Aidan Hutchinson with the spin move & the sack! 🔥 #Lions pic.twitter.com/VdaEQ9Abt8

On another big third-down situation, he lined up wide of right tackle Terence Steele’s outside shoulder. After the snap, the rookie edge rusher charged upfield as if he was going to try to loop around the outside. As soon as Steele started to commit to blocking him further upfield by getting more depth in his drop, Hutchinson spun back to the inside and was home free to take down Prescott.

Entering Sunday’s game, Steele had been having one of the best years of his career, not yet allowing a sack through the Cowboys’ first six games of the season. Hutchinson made him look silly with a perfectly executed and well-timed spin move.

Not everything was perfect about the game for Hutchinson, who also learned the hard way that bull-rushing Smith is not a good approach. But he also showed how good he can be if he gets his variety of pass-rush moves working in tandem with his high motor and strength.

The Lions’ offense may have let him and the rest of the defense down on Sunday, but Hutchinson and the Detroit defense took a big step forward coming out of their bye week in Dallas.